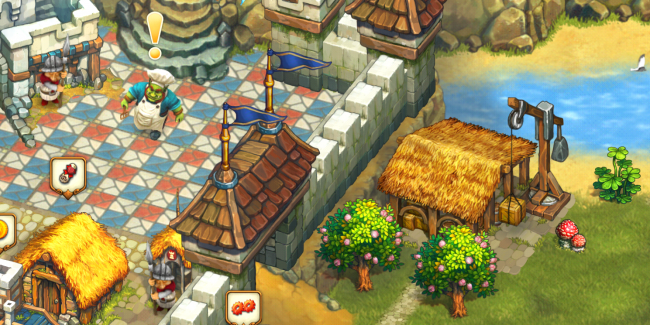 A couple of years ago, Russian game publisher Game Insight brought us the prehistoric village-builder The Tribez. In it, we took on the role of an adventurous scientist who helps a primitive tribe rebuild their village. In the new sequel to that game, The Tribez and Castlez, we once again don the scientist’s lab coat, this time setting our sights on saving a medieval kingdom. Unfortunately, that change in scope is more or less the only way to differentiate the two games, which means Tribez veterans have little in the way of new experiences to enjoy in the sequel.

The Tribez and Castlez begins with the first game’s mad scientist (at least I think it’s him; he seems to have grown some hair since then) and his pretty tribal sidekick Aurora touching down in the middle of a medieval kingdom. Actually, they don’t just touch down—they crash land Dorothy-in-Oz-like on top of a magical crystal. In one way, this helps the Prince of the realm since it sends a marauding army of greenskins running. In another, it causes problems for him since he then needs a significant portion of his kingdom rebuilt.

Being magically transformed from a scientist to a mage, you set out to help the Prince and his subjects by building structures, clearing land and collecting resources. This is where, if you’ve played The Tribez, deja vu is likely to set in.

The whole thing felt so familiar to me in fact, I decided to fire the games up next to one another and play them in tandem. My suspicions were correct; except for one game being set in a rainforest and the other being set in a medieval kingdom, the two are basically the same game. They even feature the same annoying break point where you’re forced to spend money on a warehouse upgrade or stop playing altogether. For those of you who haven’t played The Tribez however, I’ll explain what The Tribez and Castlez is all about.

The point of the game is to rebuild the kingdom, and to do that, you’ll need workers. Workers need housing, so the first thing you do is built huts. Once your workers are settled into these huts, they can do things for you like planting, harvesting, building, upgrading and clearing rocks and trees. To make them work, you simply click on the area you want them to attend to and wait (anywhere from a few seconds to 24 hours). To make them go faster, you spend magic gems. A kingdom can’t function without resources, so you also have to gather enough gold, food, wood, stone and other essential building blocks. 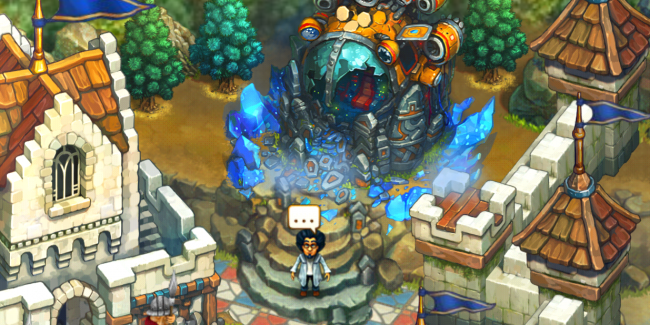 In addition to building and expanding your kingdom, you also collect items by locating them (or in some cases, buying them with real money) and slotting them into themed collections. When these collections are complete, you can activate them for decent magic and experience rewards. Gameplay-wise, The Tribez and Castlez couldn’t be simpler. There’s not a ton of thought involved, little strategy and virtually no skill. Essentially, to progress you just click and wait.

Still, there’s something gratifying about watching your little kingdom recover, and that’s because The Tribez and Castlez does a number of things well. Graphics and sound are very nicely done and give the game a lot of personality. Also good is the way the city-building mechanics are augmented with a storyline that keeps introducing us to quirky new characters (again, the character art here is exceptional). This gives purpose to your activities, which makes watching your kingdom get more populated and busy lots of fun. That is, until you run into the game’s built-in micro-transaction wall. 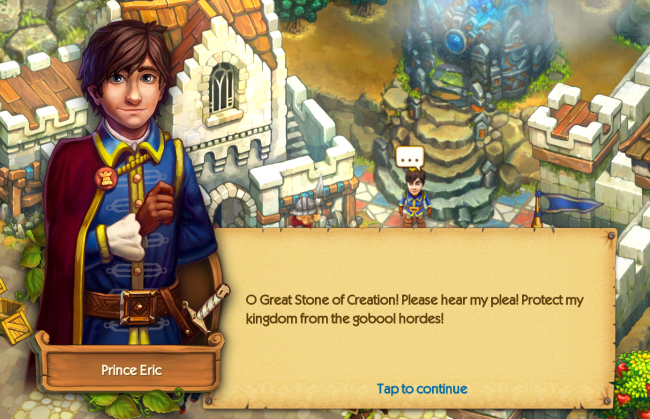 The best free-to-play games give players two options: pay to make things happen faster, or grind to make things happen for free. The Tribez and Castlez eliminates the second option by making it essentially impossible to progress without pulling out your wallet. Worse yet, its social elements are horrendous. In order to gain a magic reward, I allowed the game to post for me to Twitter, thinking it would be an occasional achievement message. Shortly thereafter, a friend wrote and told me that my Twitter feed was jam-packed with messages from the game. I fired up Twitter and to my horror, saw that the game had posted more than 58 tweets, seemingly posting nearly every single action I had taken. It was very embarrassing and forced me to apologize to everyone on my Twitter feed. So not cool. (There’s also no way to stop it from happening within The Tribez and Castlez once you’ve authorized it. You have to do it from within your Twitter settings.)

Along with this horrible “feature”, the game is extremely persistent in trying to get you to buy things. Frequently boxes pop up to interrupt you with an offer, and when you say no, another one pops up, asking if you’re really sure you want to miss out on the “special deal.” I don’t know about you, but I’m not so thrilled about the used car salesman approach to game design.

The Tribez and Castlez has some good things to offer, especially if you haven’t played The Tribez. Its audio-visuals have real charm, and it’s fun to watch your kingdom grow. Unfortunately, as much as this sequel draws upon its predecessor, it seems to have learned little from the previous game’s social and monetization mistakes. Because of the latter, it’s not an easy game to recommend.