Home / Reviews / The Trail Review: I Would Walk 500 Miles 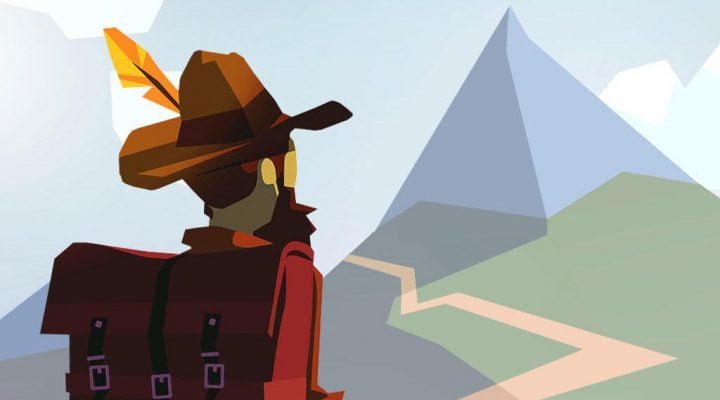 A rewarding combination of travel, collection, crafting, and simulation that feels both expansive but accessible in small chunks.

Beautiful environments to explore, tons of items to find and create, and a town-building simulation hidden in the center provide plenty of things to keep you busy.

Despite being free-to-play, there's no downtime, energy meters, or any other play-limiting F2P trappings.

Bits of humor thrown in through letters to your family back home and pre-made conversation options with other players.

The one egregious F2P mechanic is a premium currency that cannot be earned in-game and is used to purchase otherwise inaccessible items.

Some unpolished areas, like useless item descriptions and strange viewpoints during mini-games.

Interaction with other players is a bit awkward right now, as you can steal from your neighbors but not befriend them in any real way.

The Trail is the latest game from 22cans, the development house of famed designer Peter Molyneux. After a disappointing response to the massively-hyped Godus in 2014, 22cans went mostly quiet, releasing a few updates to their deity simulator until mid-2015 and launching a perpetually-early access strategy spinoff on PC. We didn’t really know what else they were up to until The Trail soft-launched on the Philippines App Store back in September, surprising everyone with its unheralded, quiet arrival. The developer who is so well known for “issuing over-enthusiastic descriptions of games under development” that it’s in his Wikipedia bio opted for a new approach on this title. And so we can easily, wholeheartedly say: The Trail far exceeds the hype. 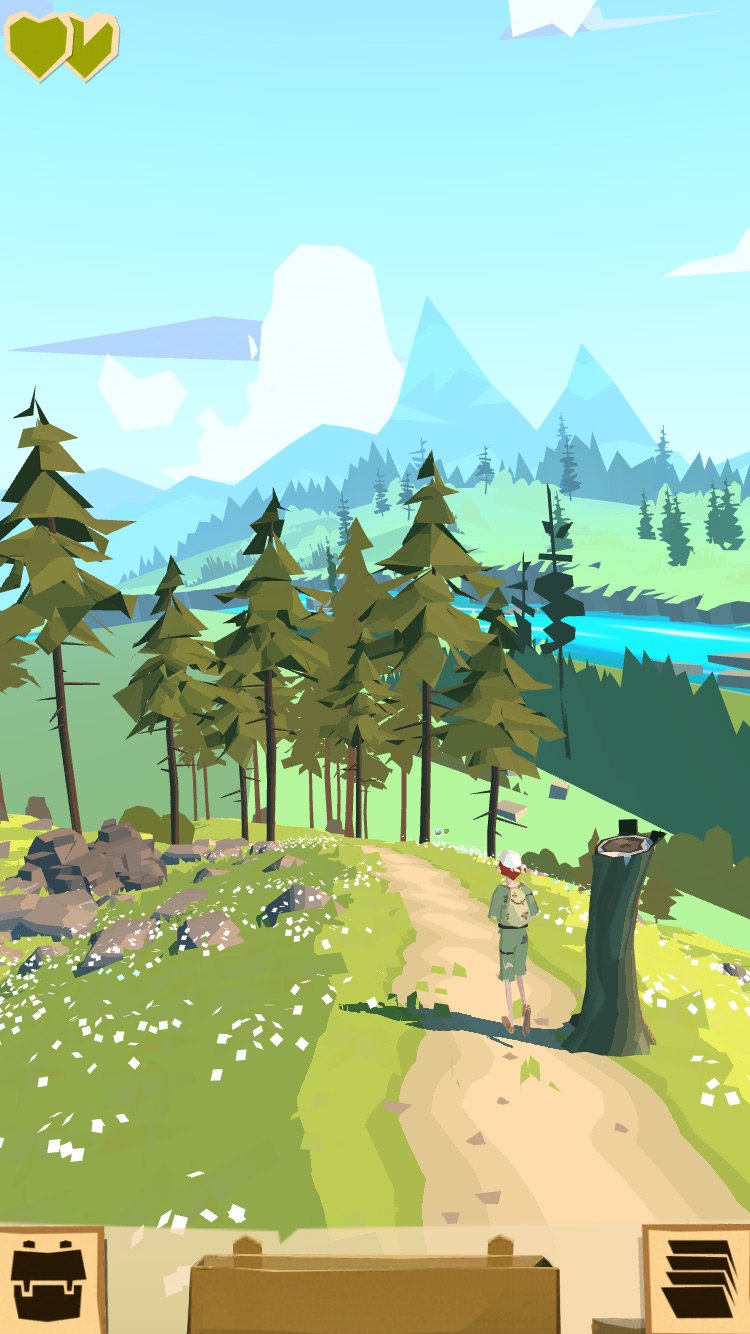 Had The Trail been bolstered in standard Molyneux fashion prior to release, it’s possible we would be disappointed. It certainly isn’t flawless, suffering from a handful of bugs and awkward design choices that make some actions more challenging than they need to be. (It should be noted that some players have encountered game-breaking bugs, such as their files being wiped—an awful experience in a game built on consistent progress. We have thankfully not encountered any bugs of this magnitude in over a week of playing, and our review is based on that experience.) Item descriptions are often useless and sometimes simply wrong, claiming an item can be found “on the trail ahead” but “only found in shops” despite being the exact same object. The game’s premium currency, “favours,” are only earned through in-app purchase, and these favours can be used to buy more powerful equipment not available through in-game effort. And we’re pretty sure 22cans is conducting some sort of bizarre social experiment on its players by testing their willingness to steal from helpless co-travelers that have passed out on the path. 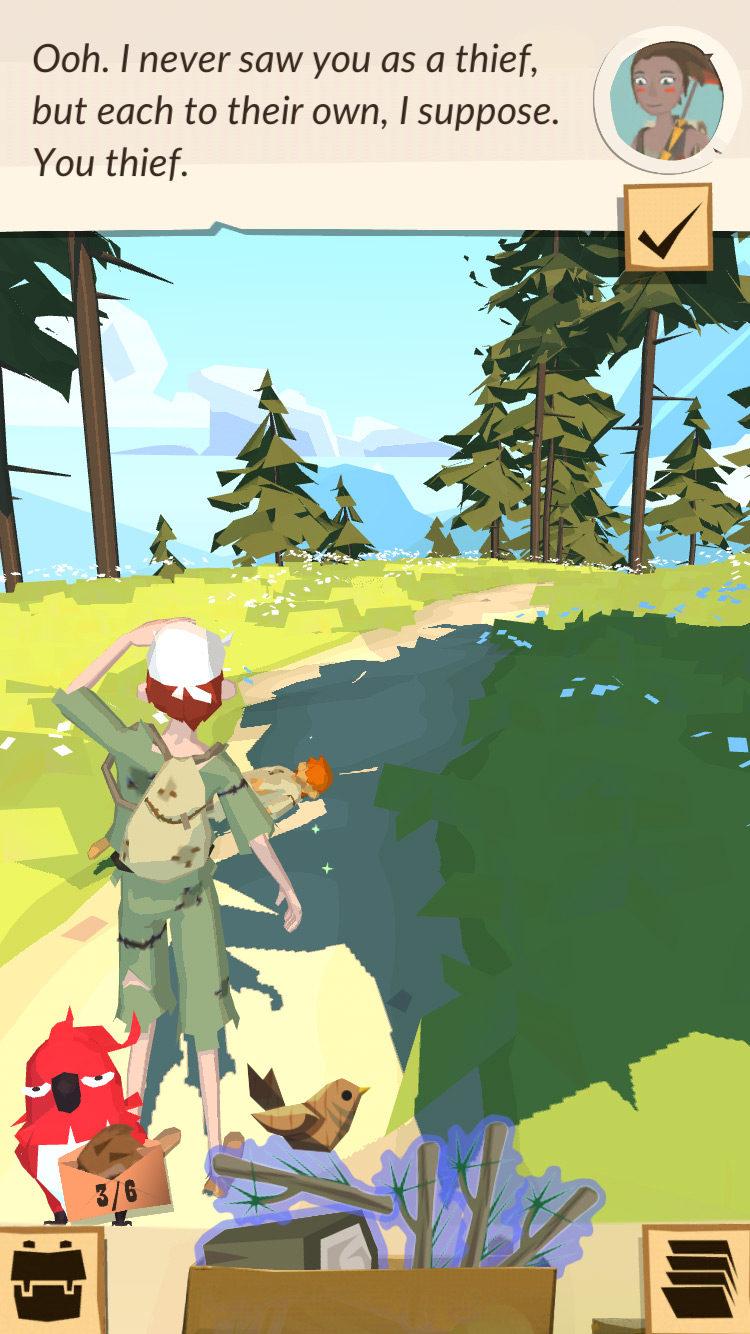 These negatives (or positives, if you like being a part of a secret sociological experiment) aside, The Trail is an engaging, original experience that utilizes its gameplay loops to create a perfect cycle of struggle and reward. Players begin their journey on the shores of the New World with nothing more than the ragged clothes on their back and a list of very optimistic to-dos: settle in a new town, take on a profession, raise a family, make a fortune. There are a few requirements in between, but ultimately The Trail is a game with large goals and a lot of small steps that lead to them.

We mean that both figuratively and literally. You will be taking a lot of steps as you walk down the dirt path from the dock where you land to, eventually, the town you will settle in and beyond. The main gameplay in The Trail is simply walking, which your character will do automatically according to the speed you’ve dictated. As he or she walks you’ll be able to control the camera and look around in search of resources scattered about the woods, mountains, desert, and other biomes you’ll cross. You can collect these resources—such as apples, twigs, rabbit fur, and so on—by dragging them from the world into your rucksack. 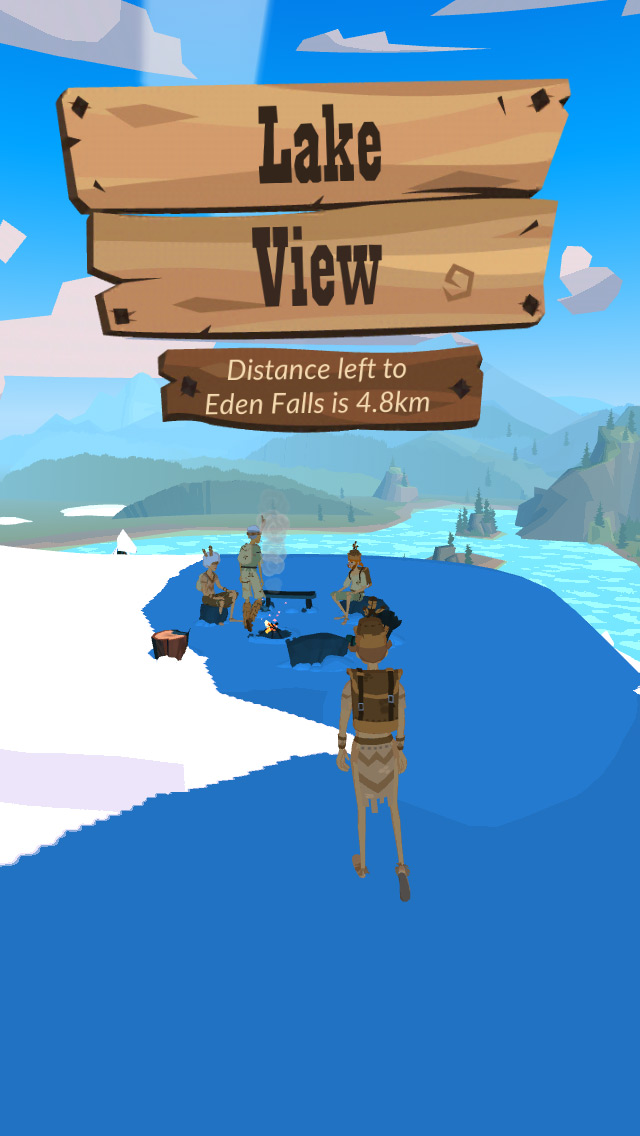 If walking and picking up twigs sounds dull, don’t worry—there’s a lot going on during your hike. For one, the world itself is gorgeous and each path has something new and interesting to see. You’ll take a walk through shaded woods with sunlight slitting through the canopy of trees; up an icy, desolate hill with snow falling softly all around; along a narrow path overlooking an expansive lake. There were times I would stop my character just for a chance to look around at the beautiful environments and take in the sights. Gameplay-wise, in addition to finding and picking up the items littered about the ground around you and in the distance, you’ll also be able to play resource-collecting mini-games like chopping wood or slinghotting beavers if you have the appropriate tools on hand. There are other players traveling around you, so you’ll have to snag resources you need before they get to them, adjusting your speed to overtake or lag behind them if they’re swiping what you want. Your bag has limited space, so you’ll need to manage what you’re carrying and rearrange objects if it starts to overflow. And your stamina meter is always ticking down, requiring you to balance walking speed, carry weight, and food ingestion to ensure you make it to the next camp.

Those camps act as the goalposts and save points between walks, allowing you to recharge your health and craft items from your pick-ups before continuing on the next leg of your journey. The items you can craft range from clothing that will improve your attributes like stamina and walking speed to sculptures that are only used to earn extra cash. Camps also let you trade with other players through a mini-game where everyone places their sale items on a conveyor belt and snag what they want before it’s fed into a wood chipper. This is a good way to get anything you didn’t find along your walk, like that last piece of rabbit fur you need to craft a new hat, or to lighten your own load by selling off all those rocks you kept shoving in your pack. 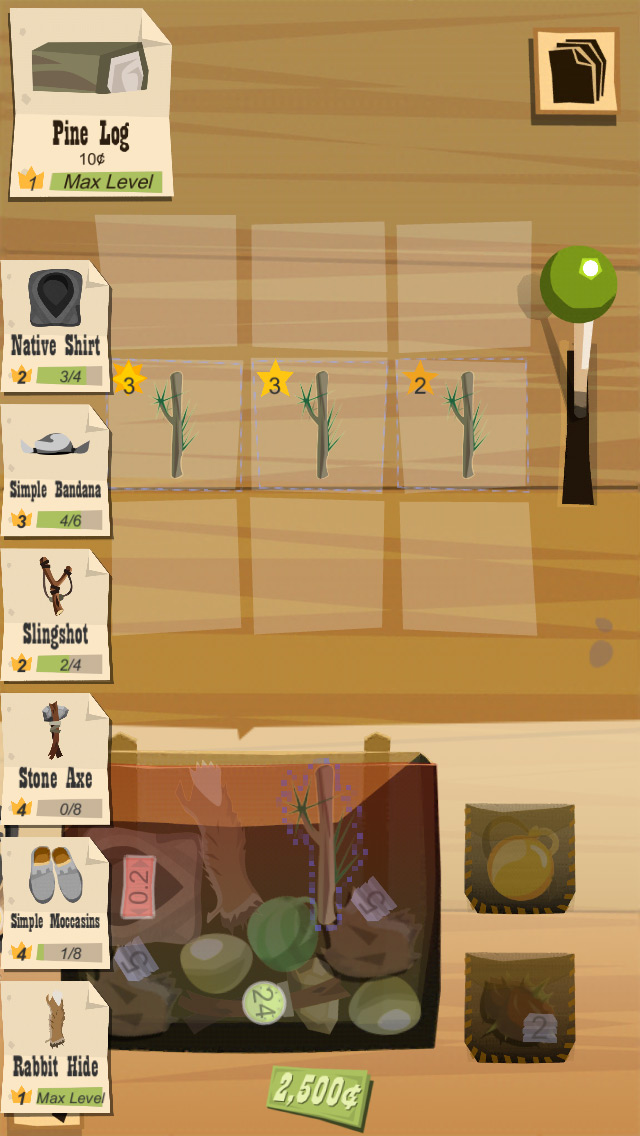 You’ll learn how to craft new items by completing quests for NPC Beatrice and her adorable bird Koko, who travels with you and holds any quest items you give him. These new craftables will provide better equipment and higher-priced objects that in turn let you earn more money and travel farther without getting tired or having your pants break. The main loop, then, is walking along the trail, collecting items you can craft or sell, then crafting or selling those items so you can continue walking and finding more items to craft or sell. As you progress, you’ll uncover new areas and items that will let you make new recipes, so you’re always growing stronger and richer.

Eventually, you will make it to the town of Eden Falls and be able to buy a home and choose a profession to pursue. Technically the town you settle in will be whichever one is open (we live in “Wealthstone”), alongside 19 other players who will be your neighbors going forward. The town acts as its own simulation, letting players contribute to its growth by collecting items and gold that will build new town features—like a shop, bank, or even town hall so you can elect a mayor—and upgrade their own houses. Once you settle in a town, however, your journey is far from over. You will continue traveling beyond Eden Falls and into the great unknown, still collecting items and crafting objects, but you’ll always have a home to return to and a place to hang your hat—or, all those rabbit furs that were clogging up your bag. 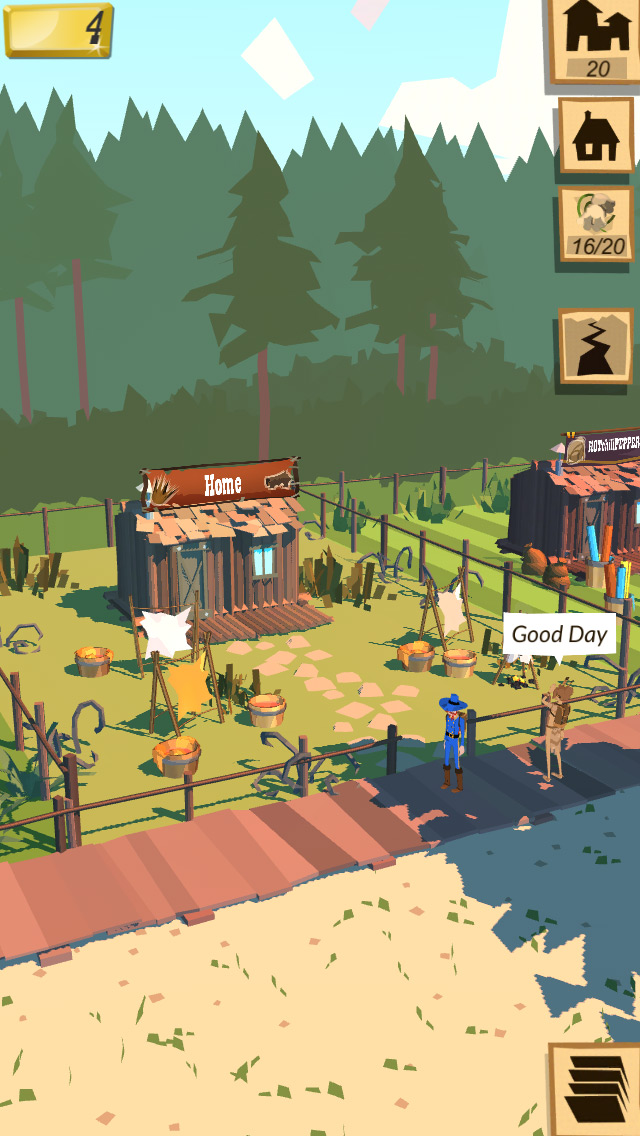 What happens in the great beyond is a mystery as we’re still traveling. If the game’s initial list of objectives is to be believed, you’ll be able to get married and build a “business empire,” although what that entails is unclear. Knowing Molyneux, it could be as simple as expanding your hometown profession to a small shop or as grandiose as taking over the world as a hot air balloon-hijacking dictator. What we do know is the game we’ve already experienced is a refreshing, rewarding mix of exploration, simulation, and growth that has been surprisingly deep beyond initial thoughts of “You just walk?” The gameplay elements of traveling, collecting items, and crafting combine into a fluid path forward, and a constant sense of progress even if you choose to retread past areas. There are some unpolished corners that could use attention in future updates, but so far this quiet release has had a thunderous start.