Home / Reviews / The Trace Review: Not Quite Hard-Boiled

The Trace Review: Not Quite Hard-Boiled 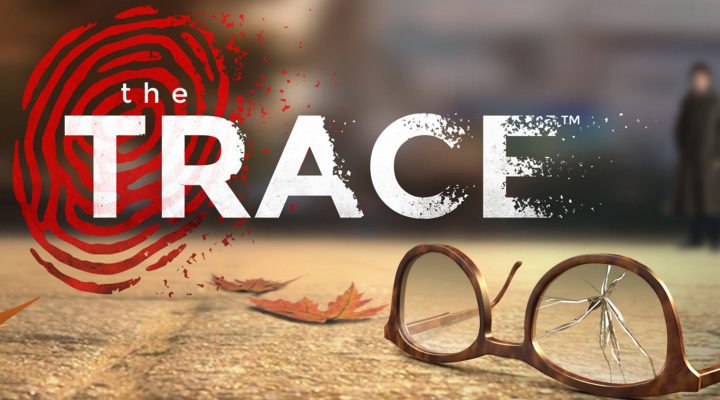 The interactive gameplay mechanics are immersive and just plain fun

Characters are shallow placeholders; story, while twisty, is fairly predictable

Minimalist touch controls are sometimes finicky, sending you to an area only near where you tapped

The Trace is an immersive first-person detective mystery from Relentless Software, the creators of the similarly crime-savvy Murder Files series. Unlike its quirky and cartoonish cousin, The Trace takes a classically gritty approach to the genre and forgoes goofiness in favor of gravitas. Although our protagonist is not without a sardonic sense of humor, (providing comments like “A box of eggs – scrambled now, I guess” after a diner explosion), the atmosphere is primarily serious and based in reality.

This creates a relatable world that rewards logic and translates everyday actions into fun gameplay mechanics, but falls a bit short in character. 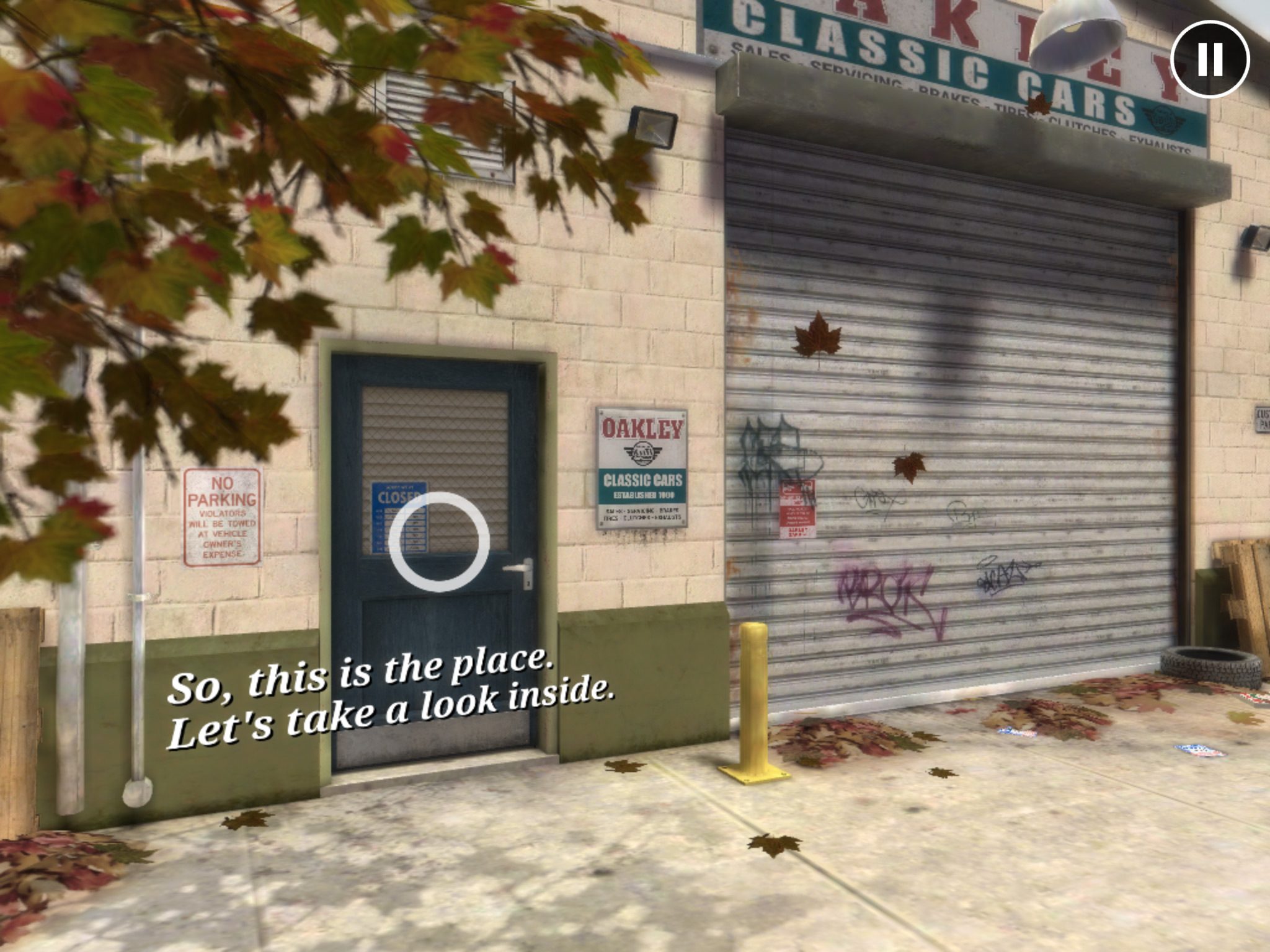 The game wastes no time throwing you into this world, starting at the front door of a crime scene in a car shop. Through a brief phone call with your partner, Alex—the Oracle to your Batman—you learn that it’s a suspected suicide and you are Detective Sam Pearce. Everything else we’ll have to learn along the way, through good old fashioned detective work and puzzle solving.

From this very first scene, The Trace is firmly rooted in a visible and believable reality. Even in this outside area, where you’ll spend only a few seconds of the entire game, there’s an exceptional attention to detail. Graffiti mars the garage door in multiple handwritings; individual leaves float past from the nearby maple tree; the “Closed” sign has been turned in anticipation of your arrival. This realism and thoughtfulness carries over into the gameplay itself, requiring you to actually turn the door handle to open the door and enter the building—the first of many such typically routine occurrences that actually liven the entire experience. 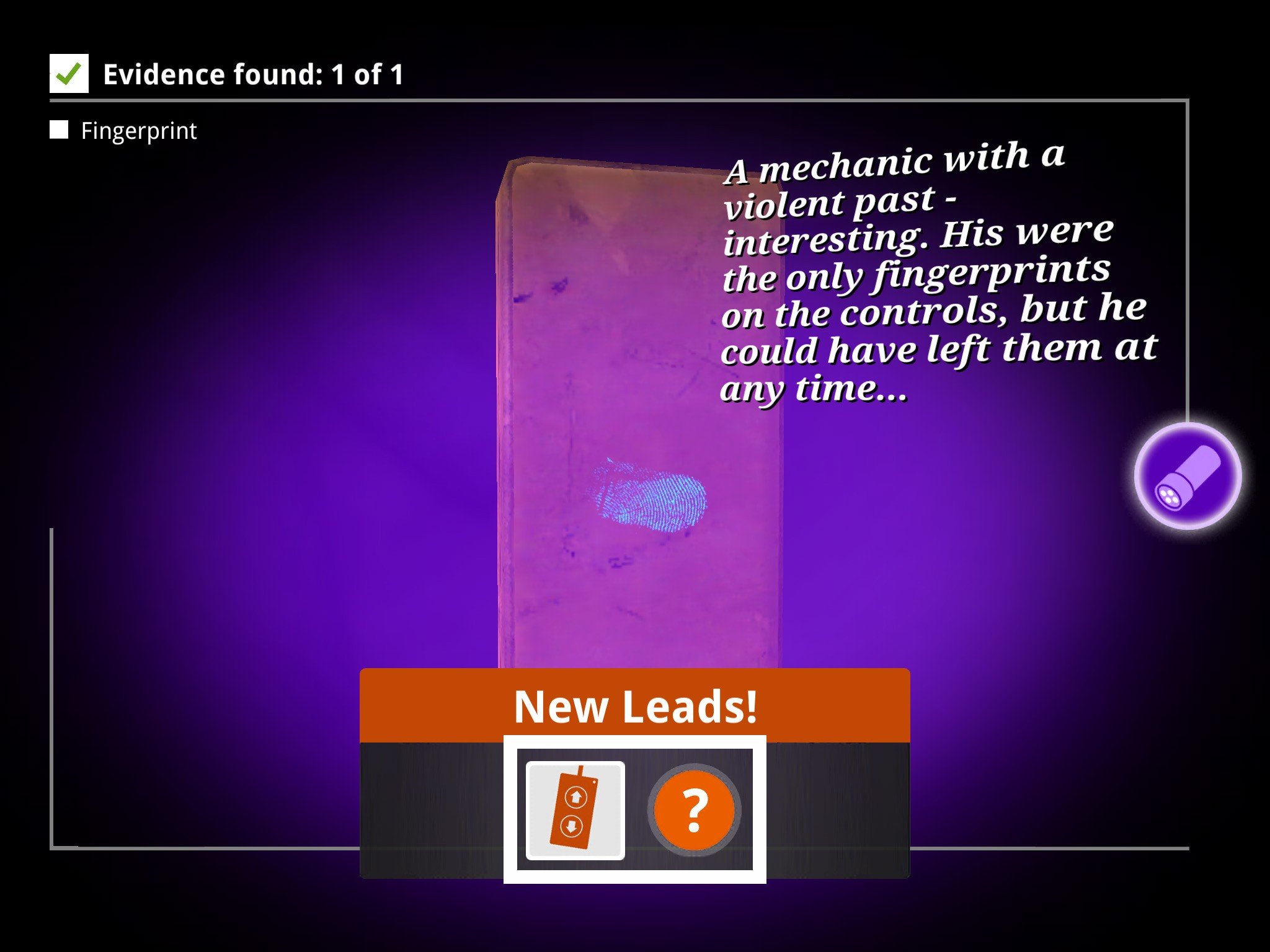 Once you make it through that door, you’ll immediately begin investigating crime scenes and collecting leads. There are three separate but related crime scenes in The Trace, each assigned its own chapter. Although a single story spans all three chapters, the items and information you collect will be confined to their location, allowing you to freely explore each without the burden of backtracking.

While you’re solving an overarching story that persists throughout the game, each chapter tasks you with finding and answering specific questions related to its crime scene. For instance, chapter one starts as a suspected suicide (obvious murder) in a car shop. By searching the garage area and nearby rooms, you’ll uncover leading questions like “Why was the safe in the office open?” and “Who dropped the lift onto the victim’s head?” At the same time you’re finding new questions, you’ll also be uncovering clues that will provide the needed answers.

The Trace utilizes its tactile immersion in all areas, including this question- and clue-hunting. To find someone’s fingerprints, you’ll need to actually tap on their hand and then hold down to scan their fingertip. To investigate a computer, you’ll need to unlock it by typing its PIN on a keyboard. To find someone’s ID, you’ll need to physically remove their wallet and pull their license out of it. Thanks to this literally hands-on approach to interacting with the world, as well as the game’s minimalist, mostly menu-less style, it’s easy to get caught up in even seemingly minute actions. I found myself catching my breath as I replaced a lightbulb, wondering if I might drop and break it, as well as what shocking scene it might illuminate once turned on.

Both fortunately and unfortunately, the lightbulb could not break. The Trace is saintly in its level of player forgiveness, creating no fail states other than giving up. And while there’s no in-game hint system in place, there are also no distractions, creating an almost too-streamlined adventure with little challenge. The requirement to complete a chapter is to uncover all of its leading questions and find all of the clues that will answer those questions. This is primarily a matter of tapping areas of interest and solving very straightforward inventory puzzles, which are made easier by being grounded in reality. It also helps that Pearce doesn’t opt to lug a bunch of garbage around, so your hardest decision is often: should I use the screwdriver or the wrench to unscrew this panel? 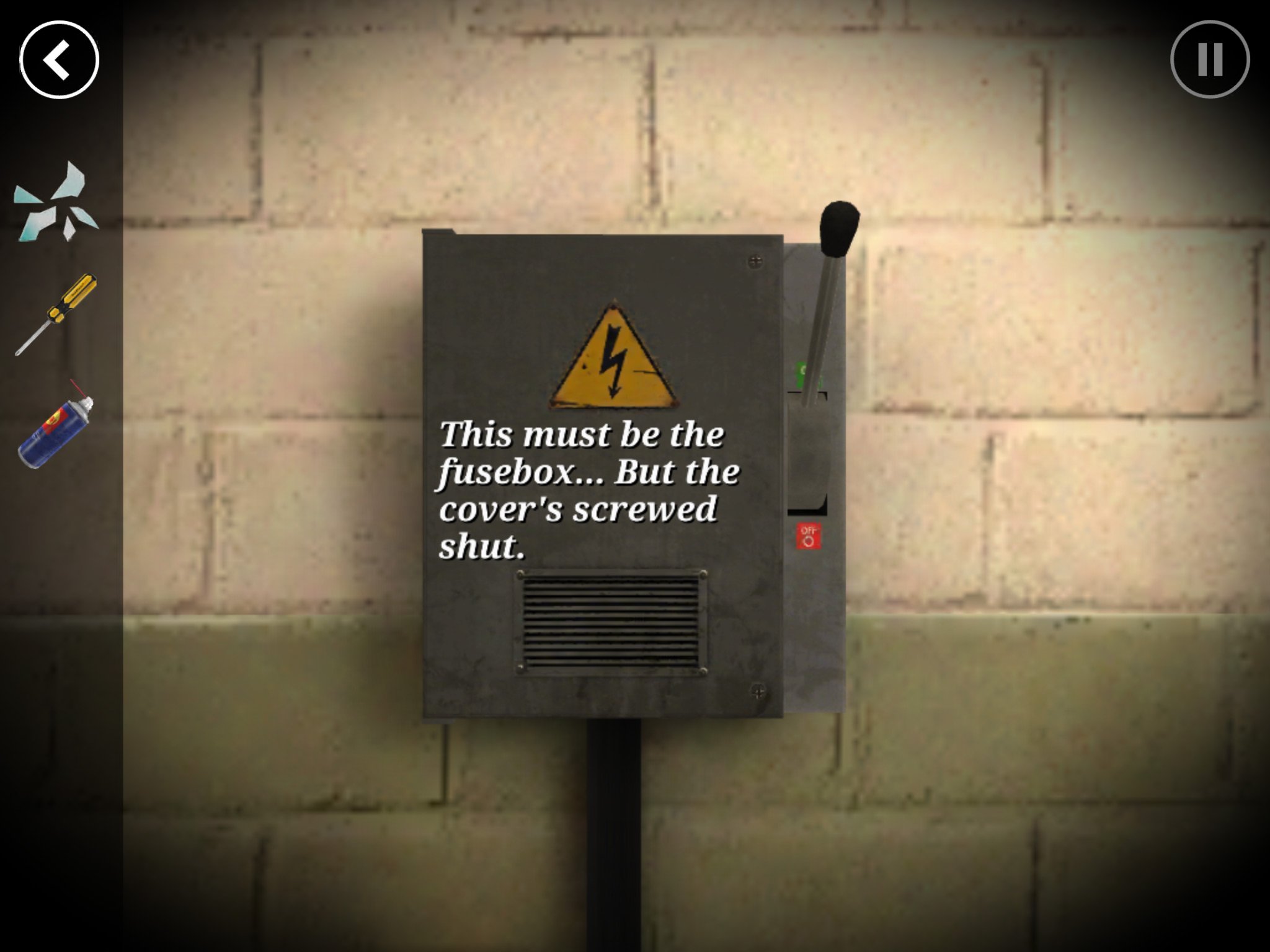 This is a blessing and a curse. While designer dream logic is often more frustrating than fun, the Trace is an obviously adult game—packed with dead and bloodied bodies—and could benefit from puzzles that would be more challenging to adults. Even its story errs on the side of simplicity, with a twist—which we won’t give away—that will be familiar to anyone who’s watched a single crime drama. Thankfully, as it’s drawn out over three chapters with some unexpected timing thrown in, it doesn’t feel as soft-boiled while you’re actually playing.

It’s easy and almost necessary to be harder on the murder mystery itself as we’re offered very little of our heroes, Pearce and Alex, to buffer the narrative. Pearce provides a few witty comments upon investigation, and Alex is apparently British. Otherwise, they are avatar shells that allow us to complete the game. While a shoehorned backstory or relationship would be worse, this lack of character in our protagonists—coupled with the fairly standard mystery plot and lack of challenging puzzles—leaves us with a game that does a few things well and others just decently. 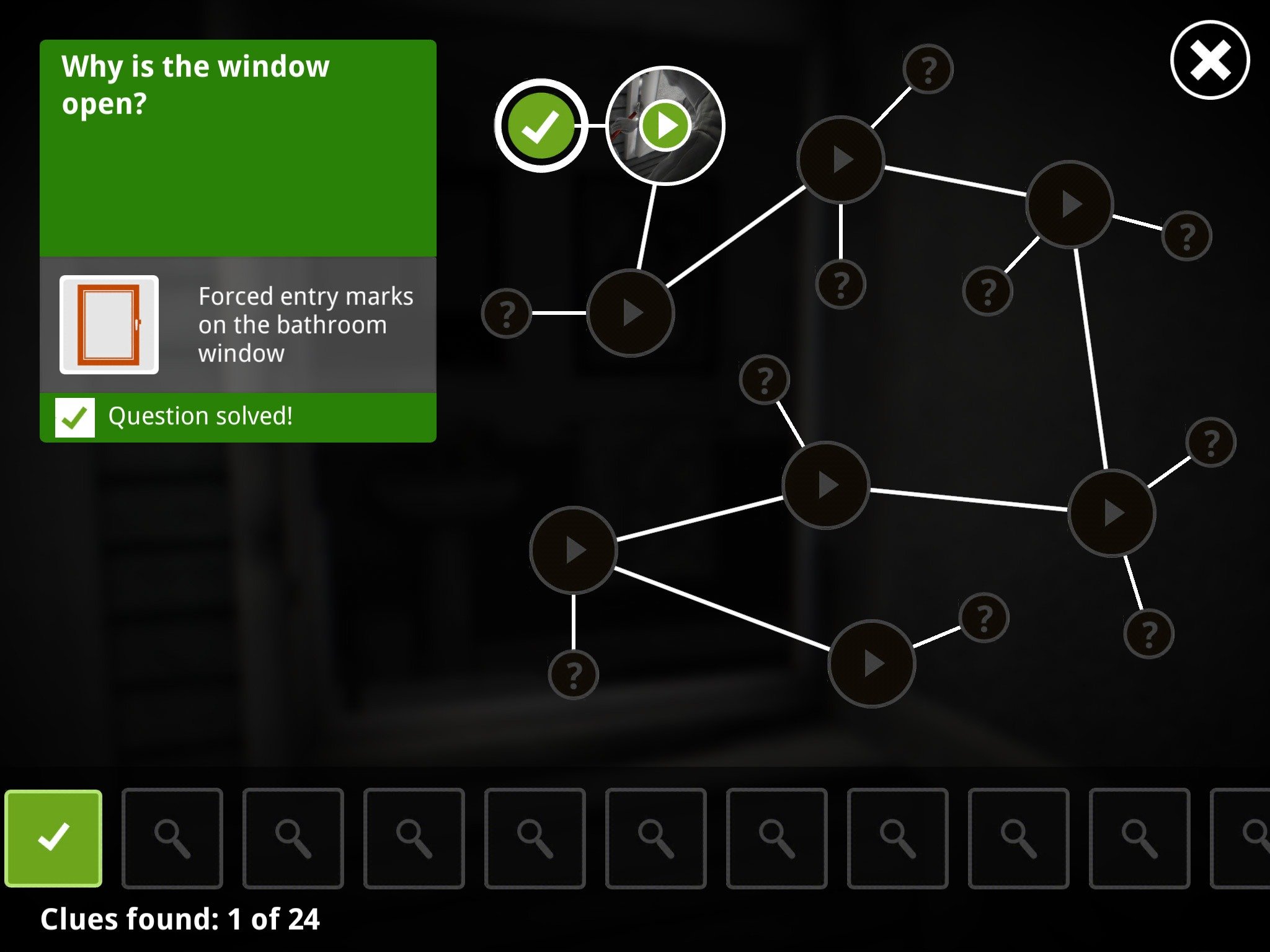 The truly rewarding moments in The Trace are exploring its gorgeous, accessible world and feeling like you are a physical part of it. Opening a door and not knowing what lies behind it; looking around a single room from different angles; finding clues because you have actually moved, unlocked, or turned your way to them. Its question-and-clue answer system is a clever way to tackle the multi-part mystery without overloading the player or sacrificing case complexity. Spread out over three chapters, the clue trees you build cover a surprising expanse of topics and evidence, despite having started from scratch.

These features are strong enough to earn The Trace a heartfelt recommendation, with the hope that future installments will take greater risks in their puzzles and characters.

Game of Thrones: The Sword In The Darkness Review – A Return To Form