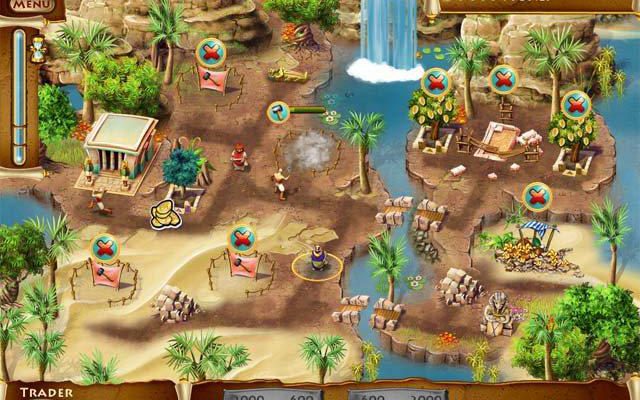 A pyramid scheme that won’t leave you broke

The TimeBuilders: Pyramid Rising 2 sees players heading back to ancient Egypt, as the architect Senmut has been healed from his illness only to be greeted with another curse: if his people can’t construct or repair a series of once beautiful statues, the empire is doomed to failure for upsetting the Gods.

The TimeBuilders: Pyramid Rising 2 feels more like an expansion for the original game than a true sequel, even if the storyline is rather deep when compared to other time management games. That is to say that while the storyline is new, the gameplay definitely isn’t. Throughout this level-based game, you’ll complete three tasks per stage, ranging from building and upgrading homes to planting and harvesting crops. While each level comes with a different layout, the majority of your time is spent assigning workers to various tasks, like building homes or functional structures on empty lots, destroying rock piles for stone or opening sarcophagi for treasures.

Each level will see you balancing a variety of resources, from stone and coins to Happiness points and your two kinds of workers: builders and rent collectors. Buildings eventually receive upgrades, giving you even more things to spend your coins and stone on, but you’ll need to plan ahead in some levels to make sure you don’t back yourself into a corner. Luckily, these dead ends are few and far between, as each level is rather simple to complete, even if you’re going for the gold rating on each, which will see you earning Golden Scarab points, the game’s overall currency. 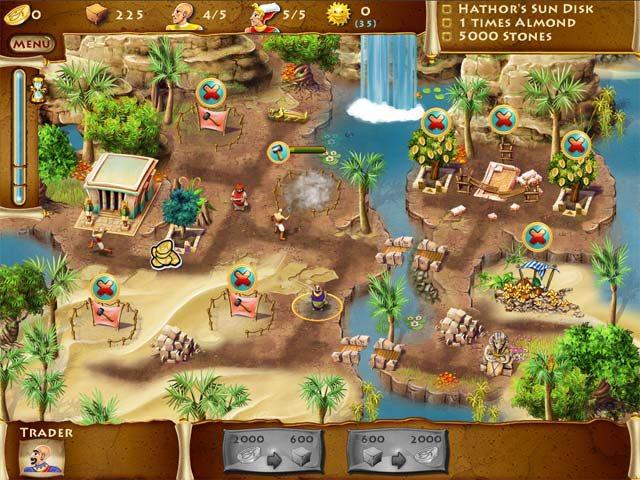 Golden Scarabs can be spent on power-ups at the beginning of each stage, but the assortment of available power-ups changes from level to level and you can only purchase one for each. One power-up might see your workers moving at a faster speed, while another gives you a starting boost of stones or gold, as examples. Players that are comfortable with rapid actions and planning will likely never run out of Golden Scarabs, making the inability to purchase more than one boost per level more than a bit annoying. If I’m performing well enough to afford more than one boost, why not let me?

In between levels, the storyline is presented through makeshift cutscenes that are really glorified slide shows, and there’s no ability to skip the text as you read it. This forces players to sit through the same pictures for far too long with the only option being to skip the scene altogether and miss out on the story’s progression in the process. Thankfully, the rest of the game’s menus and tutorials can be completed at your own pace, and you’ll be greeted with some lovely, colorful graphics along the way (the game’s cutscenes notwithstanding). 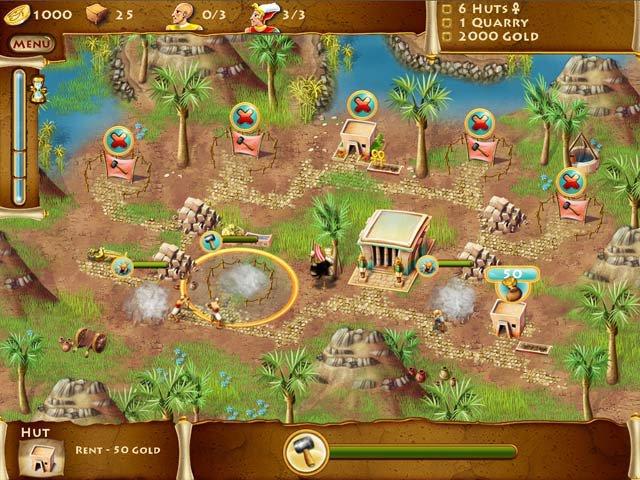 In a genre that’s full of options, there are some slight issues that keep The TimeBuilders: Pyramid Rising 2 from standing ahead of the crowd, with the biggest offense coming in the form of unnecessary clicks that are required to complete most actions. Instead of simply activating a worker when clicking on an item, you’ll need to confirm your choice at the bottom of the screen. While this is an understandable move for some plots – as you’ll be given the choice of what kind of item to build on each standard plot of land – other items have one basic function, so it would have been nice to see the game allow for faster actions, rather than requiring users to take precious time to confirm all choices before they can be completed.

While it’s nice to see a continuation in the Egyptian portion of the TimeBuilders saga, there haven’t been as many improvements made here as we would have liked. At the end of the day, Pyramid Builders 2 is still a basic time management game that offers little in the way of humor or originality to make it stand out. The game’s only truly standout quality is the ease with which most levels can be completed, but depending on a player’s preference, even that might not be a good thing.