Home / Reviews / The Three Musketeers: One for All! Review 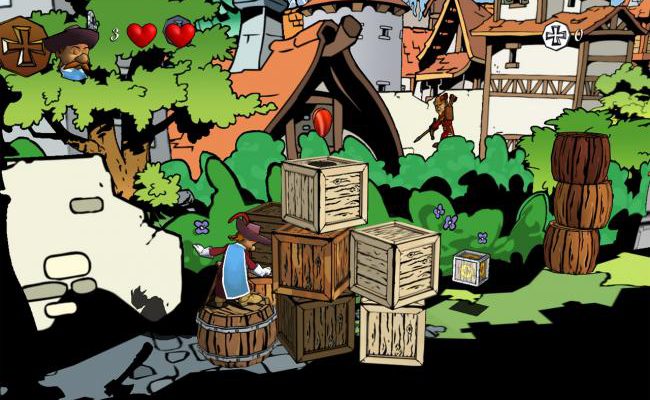 The Three Musketeers: One for All!

When it comes to the gaming world, “Family entertainment” all too often involve some very simple, half-baked minigame selections, mediocre graphics and generally little fun. The Three Musketeers: One For All! falls under the family category in its simplicity, but eschews minigames for a simple platform and surprisingly good graphics. Unfortunately it suffers from mediocre controls that take away some of the fun factor.

In The Three Musketeers: One For All! you play as Porthos, out to rescue his other Musketeer friends (captured while having drinks in a pub) from the evil Count Xavier. What follows is a platform adventure that features great visuals and a simple story. The graphics here have a nice, hand-drawn look to them that, while flat, have a lot of life. When running, sometimes the camera will swing around as Porthos rounds a corner. It’s a lovely effect.The Three Musketeers: One For All! goes one step further in the sound department, with a fun orchestral soundtrack that’s reminiscent of a swashbuckling film. There’s also a bit of voice acting that is hokey, but stays just on the side of being good. 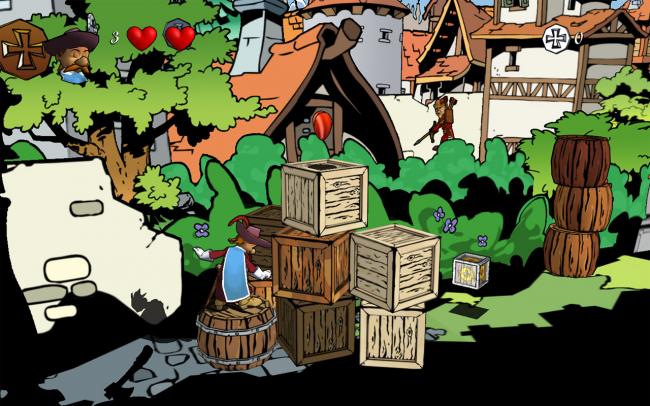 Unfortunately, everything else goes downhill from there. The controls in The Three Musketeers: One For All! are pretty awful. Running, ducking and climbing is done with the arrow keys, the X key slashes your sword and the spacebar jumps. The controls are fairly loose, and the game adds some contextual controls that complicate matters further. Other than jumping, the spacebar also lets you slide down ladders to descent faster. However, you’ll need to be able to jump and grab adjacent ladders above pits of instant death. That means pressing the directional arrow you want to jump, pressing spacebar, holding the arrow key until the ladder you want to grab is right in front of you, then press the up arrow to grab hold. Of course, you’ll have to hit the ladders dead in the center in order to engage the hold. It’s a giant, clunky mess.

It’s a good thing the enemies seem to have suffered serious head trauma to make up for the terrible controls. Enemies just run up to you and… well, keep running. Sometimes they’ll slash, but the only tactic you can use is to slash, run away and slash again. If you’re really lucky, you can slash them, then the guard will inexplicably return to a stationary guard position.

There’s also little reason to try to excel in The Three Musketeers: One For All! There are no unlockables, achievements or any other mode. Even getting all the silver coins floating in a level will only grant you an extra life.