The Testament of Sherlock Holmes Review 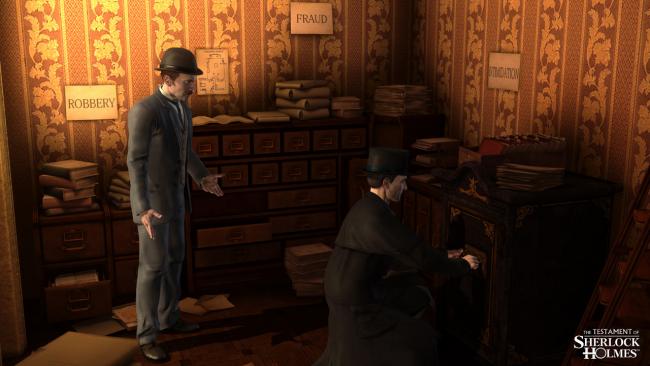 No fictional character has embedded himself in our culture as deeply as Sherlock Holmes.  His name is as recognizable as Hamlet’s or Johnny Appleseed’s, and his adventures are as well-known as any Greek myth.  He is the archetypal detective.

What I find most interesting about Sherlock is that the actual mystery stories that bear his name have become almost irrelevant.  They are no longer necessary to have an understanding of the character.  Young Americans learn everything they need to know about Sherlock — his signature hat, his pipe, his catch phrases — from television.  Holmes’ presence in popular culture is ubiquitous, whether in parody on The Simpsons, played by Data on the holodeck, or by Wishbone on PBS.  If you were to ask a kid what a detective was, he would describe Sherlock, whether he had ever read a Sherlock Holmes book or not.

And now, for a confession.  I, like this hypothetical kid, have never read a single Sherlock Holmes story.  I’m ashamed to admit this, as I consider myself a fan of the character.  The holodeck episodes of Star Trek: The Next Generation are among my favorites, and anybody who isn’t totally in love with Benedict Cumberbatch’s performance on BBC’s Sherlock should be committed.  Even Guy Ritchie’s Sherlock movies are entirely awesome.

Despite Sherlock’s pervasiveness in our culture, there was still one medium in which I had never encountered him.  I had yet to take up the mantle of Holmes in a game.  It’s a daunting prospect, controlling the great detective.  Me being the dullard I am, how could I be expected to solve the sorts of mysteries that are Sherlock’s bread and butter?

The fine adventure game The Testament of Sherlock Holmes overcomes this hurdle with grace.  How do you empower a player — make him feel as if he is Sherlock — without making the game a cakewalk?  Sherlock wouldn’t be Sherlock if he was bumbling around, stumped by a simple puzzle.  On the other hand, you can’t make a game that plays itself — that’s just boring.  Testament finds balance with two core mechanics.

One is the non-intrusive sixth sense.  Whenever you need a push in the right direction, simply press the spacebar and you’ll be nudged toward the next object you can interact with.  Gone is the frustrating, time wasting pixel hunting that saddles most examples of the adventure genre.  Alone, the sixth sense is nothing more than a hint system.  But when combined with the game’s deduction system, the sixth sense feels less cheap and more like an extension of Sherlock’s brilliance — a result of his heightened perception.

Unlike some adventure games, you will not be able to proceed simply by clicking on everything/combining everything/using everything in the environment.  There is a purely intellectual aspect to each scenario you tackle.  After combing an area for items and clues, you must use reason to put the pieces together.  This is done using the deduction system — essentially an interactive flowchart that asks multiple choice questions about the circumstances of the situation around you.  Why are there three different kinds of footprints on the floor?  Why are these bruises older than the fresh wounds on this corpse?  After analyzing the situation, you must use your conclusions to arrive at the larger solution.  Then and only then will the game progress.

This deduction system sets Testament apart from other adventure games.  It felt to me very much like LA Noire. Games ask of players quite a bit, but rarely do they ask them to use reason.  It’s actually a lot of fun, believe it or not.  Testament also reminded me of LA Noire because it is a fully realized 3D world.  You can switch between 3 different views/control schemes in Testament.  There is, of course, the classic adventure-style point and click scheme that uses fixed camera angles that shift as you move from room to room.  There is a third person mode similar to that used in LA Noire and other third person action games (oddly enough, Testament controlled a lot like the Hitman games).  And, finally, there is a first person mode, which I opted for.  I found first person to be quite immersive, thanks in part to Testament’s impressive graphics.  I was happy to see Baker Street through the eyes of Sherlock Holmes.  Throw in top notch voice acting and writing, and you have yourself one hell of a game. 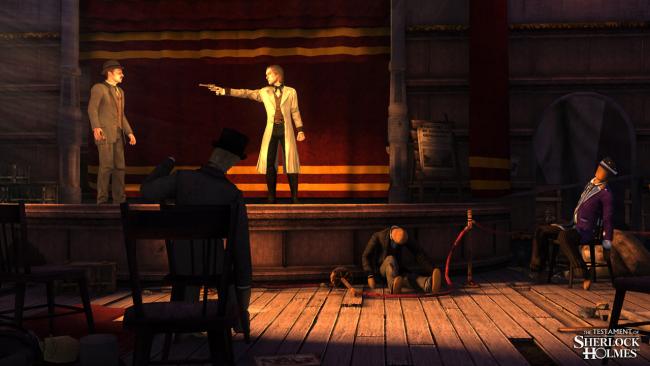 But it’s not perfect.  For example, why on earth am I asked to play as Watson?  Occasionally you switch from controlling Sherlock to controlling the good doctor.  When you do though, you’re asked to perform thrilling tasks including, but not limited to, getting a book off the shelf for Sherlock, or, thrillingly, getting a map out of his room.  These little chores border on the absurd and I wonder if they were included as a joke.  If they were, the joke falls flat.  If they weren’t, well, I’d rather be solving mysteries than playing gopher for the main character.

My other quibble is how the game’s narrative is framed by a seemingly non-sequitor cinematic of young children finding a Sherlock Holmes manuscript in the attic and reading it to one another.  This took me out of the experience.  I’m playing a Sherlock Holmes game, not The Lion, the Witch and the Wardrobe.  Let’s forget about the kids for the sequel and concentrate on the good stuff, which, I assure you, there is plenty of.

Small nitpicks aside, The Testament of Sherlock Holmes is exactly what you’d want it to be – an adventure that asks you to use your reason and deduction just as the good detective himself would.  If you’re looking to play a good mystery, consider this one a testament to the genre.