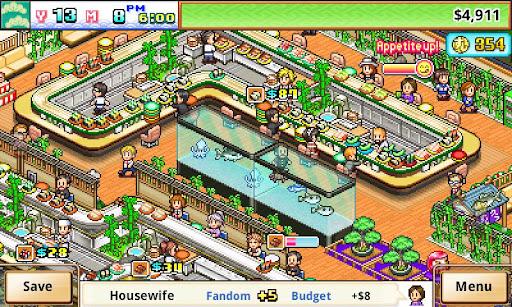 Have you ever finished a great meal at a nice restaurant and thought, “you know, there’s nothing more I’d like to do right now than a joint like this?” Me neither. And yet Kairosoft has the audacity to bring us The Sushi Spinnery… a game that has us slaving away in the role of the world’s next great sushi master. Am I just bitter because this thing has me addicted!? Maybe.

It’s getting to the point where you need only say “Kairosoft sim” for someone to understand what you’re talking about. From Game Dev Story onwards to more recent hits like Oh! Edo Towns, the company has made a name for itself creating some of the deepest, most accessible management sims around. At this point I’m just wait for my mind to be blown by the meta release of Kairosoft Story. To that end, there aren’t a whole ton of surprises to be found in this spinnery’s wheelhouse. But this is a review, after all! So here we go.

Starting with a one-bar mom and pop operation, Sushi Spinnery tasks you with taking ownership of  a fledgling restaurant, and guide it to glory. Along the way, you build up a more robust location, hire and train staff, devise new dishes, conduct PR and marketing, and even participate in national contests. Our reviewer of Oh! Edo Towns put it best when he said that “Reviewing a Kairosoft game at this point really means comparing and contrasting it to the multitude of other games they’ve released.” And while the business theme of something like Hot Springs Story might seem like a frontrunner, I’d argue that it’s Kairosoft’s fledgling hit – Game Dev Story – that can be found in the DNA of Sushi Spinnery.

Why? Because at the heart of this title, while profits are always floating in the background as a reminder of how fast you can expand, the real goal is loftier: fame and popularity. As the virtual months and years pass, your restaurant will come under continual review both by customer satisfaction and the famed, kitschy “national sushi review,” who together will determine your popularity, and in turn how many of five coveted stars your restaurant is worth. 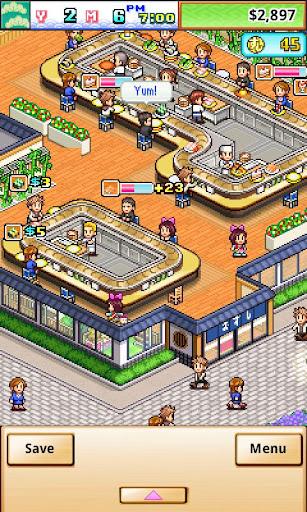 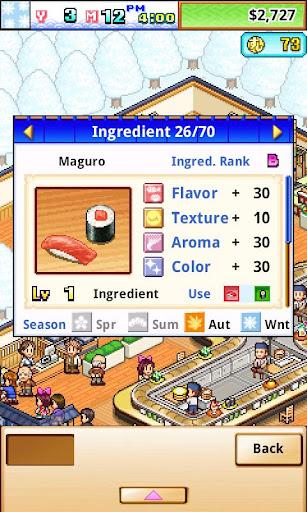 Unlike Game Dev Story however, the whole affair here feels a little disjointed, and even as a fan of earlier titles I felt like the learning curve was surprisingly obtuse. Once you get a hang of everything and understand how it contributes to your star ranking, it’s more or less classic Kairosoft, but getting there feels like a series of odd jobs because of the game’s poorly constructed “jump-in-jump-out” tutorial.

The key as far as I can see is treating the job like there’s only one task at hand until you master each component of the game, and then tying them all together slowly. At first, spend a little time in the “build” part of the menu getting acquainted with what you can add to your restaurant, and expand your center bar by adding extra conveyer space onto it. One of your restaurant’s key metrics is seating, so don’t be fooled by a love of aesthetics…you’ll want to reduce as much empty space as possible.

Though it’s also important to note that building a restaurant in real life might physically be easier than doing it in Sushi Spinnery. Unless you’re zoomed all the way in, dragging the cursor around, choosing where to stop building, and defining boundaries for what you want to trash are all tasks of monumental frustration. Save yourself the hassle and remember that pinching is – unlike in the workplace itself – your friend here. 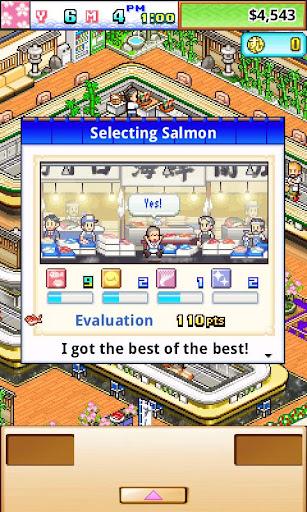 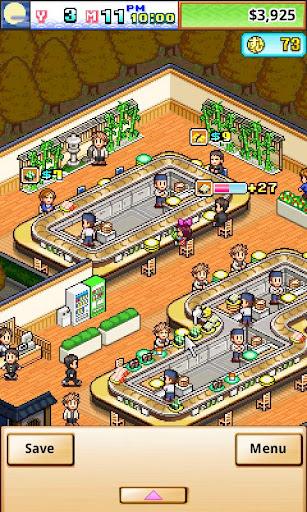 Soon after building up a good customer flow, you’ll be assigned an HR person, and it’s here that the game really takes off, if you can wade through the fragmentation. Using money you earn and “sushi coins” you get for keeping customers happy, you’ll be able to put out want ads, hire new staff, attract new customers by advertising in their part of town, train employees, and design new sushi. This last part is especially fulfilling for the aesthete and mathlete alike, with tons of joy found in seeing your creations spin around your pixelated world, and in cracking the combination code to discover what plays best with crowds and judges.

Everything from sushi rolls to workers to structures like your conveyor have stats which can be improved over time, and exploring each strikes a great balance between the feel of micro-managing and role playing. As with the outset, the key is not to let the game’s unexplained openness give you choice paralysis. With sporadic “bail out money” thrown your way when you get near bankruptcy, and a generous customer flow, cash will almost always be in your rear view. Instead, allow yourself to explore the menus, learn the ropes once, and you’ll be set for the long haul.

And ultimately, as with any Kairosoft game, this is a long haul. Improving your restaurant is the sum total of hiring great chefs, sending them away for training, improving their “discernment” and “preparation” skills, harnessing that to devise the highest quality sushi, winning contests, and keeping your customers happy. Rinsing and repeating that cycle will get you there eventually, while die hard sim fans can go so deep as to learn each character type’s spending habits, budget, and favorites, and plan their daily specials accordingly. Though I should hope the game would hit that sweet spot… Kairosoft has had enough practice. 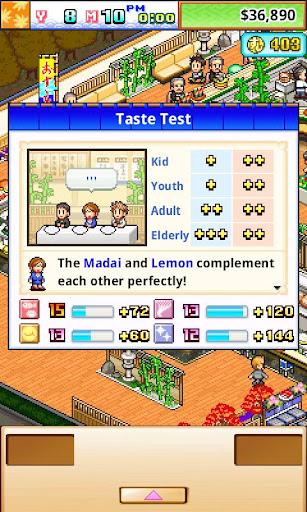 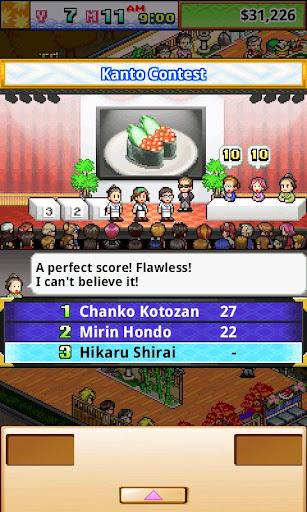 Technologically speaking, this is the first Android release of a Kairosoft game I’ve played, and it’s worth noting that even on my fairly new Samsung Galaxy SII, this thing had my system running obscenely hot, and battery life draining rapidly. If you’re taking this thing on the go, you may need to consider short burst of play time.

But if you’re picking this one up at all, you most likely know the drill. Sushi Spinnery isn’t trying to make me type the words, “in a rapid departure from their normal formula…” Instead, for those willing to stay patient against the game’s best efforts to confound them, this one looks to return to the grandiose goals of Kairosoft’s original title. And while it may not achieve the five star rating it has you coveting, Sushi Spinnery has a variety, charm, and depth that will keep series stalwarts and newcomers alike hungering for more.