The Surprising Adventures of Munchausen Review 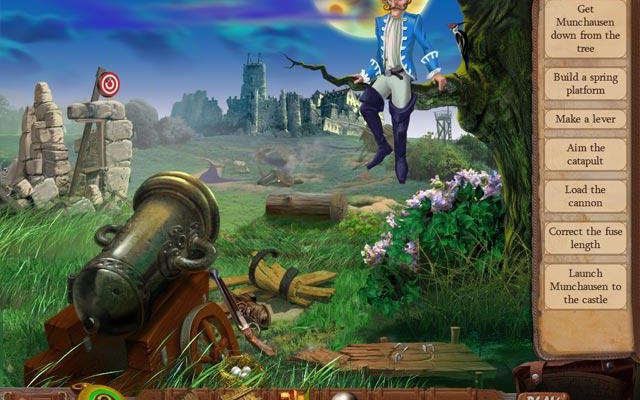 Munchausen’s adventures are calmer and more predictable than most surprises.

In a far away fairytale kingdom, the land’s prosperity and happiness is provided by a magical gem. When a would-be suitor to the kingdom’s princess destroys the gem as a way to force the King to offer him his daughter’s hand in marriage, the princess calls out for Munchausen’s help. As the clumsy yet resourceful Munchausen, you’ll travel far and wide through the kingdom, collecting pieces of the broken gemstone in an effort to stop the evil suitor from actually marrying the princess.

The graphics in The Surprising Adventures of Munchausen are just one of the game’s many unique properties. Items are skewed in size and shape, and character models lack the proportions of reality. It’s a bright and colorful world, full of brief (too brief) interactions with characters that add little to the story, other than the fact that they happen to have (or know the whereabouts of) a piece of the gemstone. 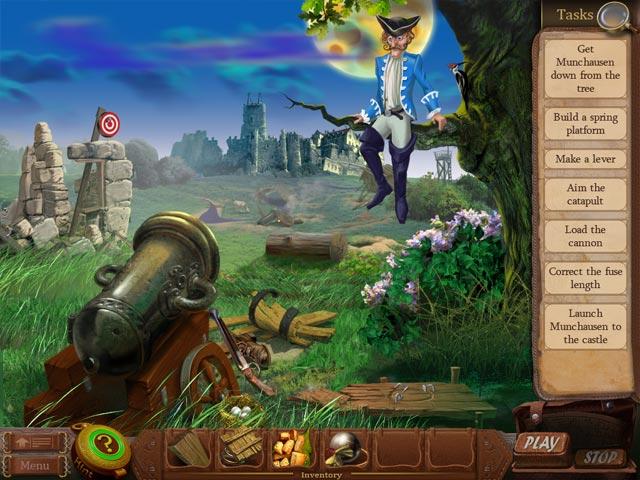 As you go along, you’ll complete three basic location types. The most common scenes are fragmented object scenes, giving you pictures of items that you’ll need to collect, and then telling you how many of that item’s fractured pieces are in your particular location, along with how many can be found elsewhere. You’ll be able to zoom into hotspots to pick up other objects, while other locations trigger item association scenes.

These item association scenes give you pictures of a handful of items, and then ask you to drag them into the scene so that they match up with appropriately associated items. For the most part, these item associations make plenty of sense and are easy to complete (a carrot matches with a rabbit, for instance, while a worm might match with a fishing rod), but there are some that don’t make as much sense until you’ve actually completed the pairing. For example, a pirate’s spyglass and a scientific microscope might not immediately seem like they match, until you realize that both allow you to “zoom in” on objects. These complex junk piles also contain far more items than you’ll actually need to complete the scene, and the graphics look a bit blurry as a result. 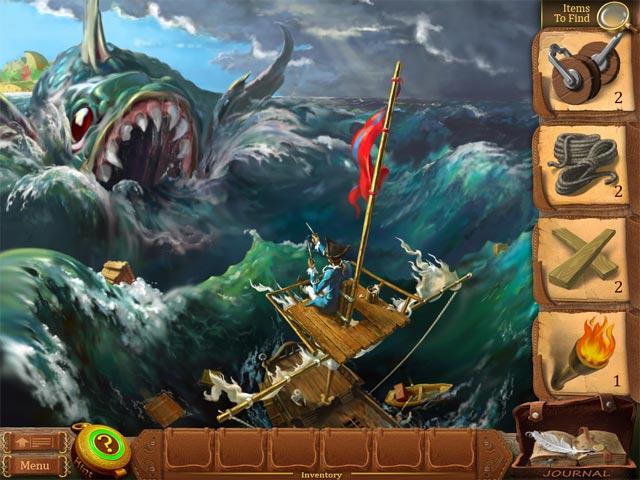 The final major gameplay element (aside from basic puzzles like tile sliding puzzles or jigsaws) sees you completing “Mechanisms.” These Mechanisms act as Rube Goldberg machines, giving you an overall task that is limited in such a way as to require you to place items in unusual positions in order to trigger one step after another to achieve a normally simple result.

Overall, The Surprising Adventures of Munchausen is a bit of a surprise. The fragmented object and item association scenes are fairly unique elements in the hidden object space (particularly the item association portions), and at least add more variety to the gameplay than a standard “find items on a list” equation. Still, the feeling of “flow” is lacking here, and the game is fairly short due to the fact that some gem pieces are simply lying out in the open, requiring nothing more than a click to pick up. The item association junk piles are also a bit frustrating in the long run, but the unique graphical theme and overall humor of the game warrant a purchase if you’re looking for something new.