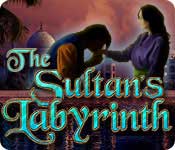 In this Arabian-themed adventure, the only things standing between
Prince Tallis and his love, Princess Sadira, are the 78 levels and 26
rooms of The Sultan’s Labyrinth. Sadira’s father Sultan Bahar
has decreed that if Tallis can pass through the maze by solving all of
the puzzles and challenges inside, he will earn the right to marry
Sadira and become the next Sultan.

The Sultan’s Labyrinth pays homage to Aladdin as well as the ancient Greek myth of Theseus and the Minotaur, but thankfully there’s no hideous half-man, half-bull monster waiting for Tallis inside this maze. Instead, each room has three different challenges to pass before moving on to the next.

One of the puzzles in each room is always an Azada-style brainteaser where you have to figure out how to get the door open to enter the next room by manipulating various objects on the screen, including picking items up and using them on other objects. (For example, using a goblet to draw water from a basin to pour onto a torch to extinguish it.)

The rest of the challenges are a collection of mini-games and hidden object-based puzzles. In the hidden object scenes, you are shown the silhouettes of a set of items and must find and click on the correct objects located somewhere in the scene itself. The tricky part here is that objects aren’t always shown at the same angle or size as their silhouette, which adds another layer of challenge.

The remaining three mini-games consist of a card-matching memory game, a tangram/mosaic style puzzle where the correct shapes must be fit together without overlapping, and a challenge that consists of finding the correct silhouette out of 12 possibilities that exactly matches a given object.

The graphics and music in The Sultan’s Labyrinth are well done, but the game suffers some pacing issues caused by the fact that some of the puzzles are far too easy and can be conquered in a matter of seconds, while others (the tangram) get tedious after a while, and still others (the silhouette puzzle) are ridiculously difficult. I found myself in such a state of despair with the silhouette puzzle, where the differences between the 12 alternate silhouettes are so miniscule that it would take a magnifying glass to see them, that I simply resorted to random clicking to solve the puzzle.

Ojects repeat themselves fairly often, but more or less keep in the context of the Aladdin-esque theme (aside from the occasional anomaly like the Canada goose). There are three hints per level, which seemed just right, but using one creates a brief swirl around the object that is rather imprecise, meaning it’s not always clear what the target is. And finally, there seem to be some glitches with the story in that sometimes the image appears but there’s no text below it.

The bottom line: The Sultan’s Labyrinth is a mostly fun adventure, but be prepared for some unevenness.