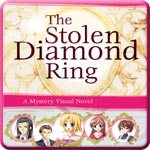 Sometimes, it’s nice to curl up and read a good book. But when was the last time you could play a book? In The Stolen Diamond Ring, a new title in the emerging "visual novel" genre, you are really interacting with a novel rather than a game, but its premise is definitely interesting, and worth more than a quick glance.

The novel (as The Stolen Diamond Ring describes itself) has seven chapters. You play through the game as Katharine Sanders, a twenty-something woman who is invited to her friend Mia Allard’s engagement party at Mia’s large family home. Of course, not everyone at the party is happy about the upcoming nuptials, but when Mia’s $30,000 pink diamond ring is stolen (hence the title), everyone is a suspect. Of course, the police aren’t good enough to solve this mystery, so it’s up to you to find out the truth.

Like any good mystery novel, The Stolen Diamond Ring has a great cast of characters. Their relationships can sometimes be hard to follow, but the game provides you with an easy-to-reference diagram showing how people are intertwined. It also provides you with generous notes and always flashes back to something someone said that was important.

The game is shown entirely from Katharine’s point of view. You never actually see what Katharine looks like, presumably to help you inhabit the character more effectively. Everything is menu-based, though "menu" is used very loosely, because there is very little to actually do here. You do not access any inventory, nor do you have any actions to perform.

In each scene, there is typically the person you are speaking to, and the room you are in. The game offers you some choice as to what to do. Talk, of course, allows you to speak to the person in front of you. Look Around gives you a brief description of the area you’re in.

Dialog with characters makes up the vast majority of your time with The Stolen Diamond Ring.  There are no voices to be heard, but lots of sound effects help convey the feelings of the person you’re talking to. You are given a couple of topics to broach, and if you’re given more information, another branch on the dialog "tree" is opened up, helping to propel the story.

Movement between areas is done using the Move button in each scene. You will have to keep track of where you are in order to access the right area. For instance, if you want to get back to your guest room but are in the dining room, you’ll have to move through the entranceway, into the hallway and then into your room. There are not many places to go, so it’s not hard to follow a trail if you need to.

The game itself is very easy on the eyes, but know that it is presented in a Japan-style of animation, usually known as "anime." Basically, everyone has very large, expressive eyes, small mouths, and the female characters of the game are impossibly proportioned. (If Mia’s sister Valerie is 15, I’ll eat my shoe!) The music is of decent quality, and definitely helps set the mood. However, sometimes the music will switch three or four times during a conversation, which can be a little tough on the ears.

As for the story itself, you’ll rarely be at a loss of where to go, or who to speak to next. You only ever have to really use the "Look Around" command once in the game, and you won’t get stuck that easily. In fact, during the conclusion, you’re given what would seem like a lot of choices, but are steered to the only ending the novel can present. There are two main issues with this. First, the conclusion given is very unsatisfactory. Given all the character development and relationships that form, the ending feels very much like a cop-out.  The epilogue is a bit of a bust, too, and the mini extra game that opens upon completion of the main story feels tacked on, and doesn’t make sense with the character it depicts.

Second, though, is that this kind of storytelling has been done much better in other places. If you own a Nintendo DS, and the premise of this kind of mystery sounds appealing, you should definitely check out the Ace Attorney series of games. Not only is there the interrogation/storytelling like there is in The Stolen Diamond Ring, but also there’s more to do, and best of all, multiple ways to end the story.

The Conjurer: A Magical Mystery Review