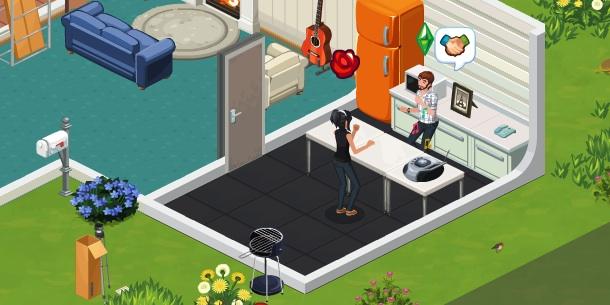 The Sims Social may not be as robust as past Sims games, but the social element makes up for it

Like Civilization World before it, The Sims Social is an attempt to take a hugely successful single-player PC series and adapt it to Facebook. It’s the same Sims gameplay that you know, only with an added social layer on top. So you’ll still be building and decorating a home and looking after your sim’s more basic needs, but you’ll also be interacting with your friends in a much more engaging way that actually lets you forge relationships. Not all of the changes are welcome, but The Sims Social is a great entry in the best-selling series.

Instead of controlling a whole family, as was the case in previous Sims games, in The Sims Social you’re in charge of just one character. But most of the core elements remain in tact. Your sim, like everyone, has needs, and you’ll need to ensure that they fulfill those needs in order to be happy. That means making sure that they eat, bathe, and go to the bathroom, but also that they cut loose and hang out with other sims regularly.

And that’s where the real fun of The Sims Social is found. Because each of the other sims that you interact with, aside from the token computer controlled character, are made up of your Facebook friends. And instead of simply being able to go to their home and perform a few helpful actions as in most Facebook games, you actually get to interact with them in meaningful ways to develop different types of relationships. You can, of course, be friendly and helpful and earn their friendship. Or you can be a jerk and become enemies. Exploring the different interactions is a lot of the fun of the game, and doing so opens up even more possibilities.

And, yes, you can still make woohoo.

In an interesting twist, as you reach new milestones in your relationship with another sim — say, you become enemies, or maybe you want to start dating — your Facebook friend will need to approve of it. This forces you to actually think about your actions, and can create some delightfully awkward scenarios. Even though the interactions are entirely virtual, the fact that your friend will know about them makes them feel all the more meaningful.

Plenty of other mainstay Sims features are in the game as well, although tweaked in significant ways. You have less freedom when it comes to customizing your home, as you have to buy rooms instead of building them yourself. Many of the items you’ll buy, such as a new couch or stove, will also require numerous collectible items to build, which means that you’ll spend a lot of time with a house full of unfinished furniture. Most of these items can be collected while playing but some, frustratingly, need to be gifted by friends.

The skill system returns too, but in a diminished capacity. Instead of becoming a better cook so that you can make better meals, you’re really just learning the skill so that you can unlock new content, like a coffee maker or a stove. Upgrading skills also replaces the need for a job as you earn money while doing so.

There are also several features that simply feel tacked on. Farming, especially, feels very out of place as does the need to constantly clear out weeds and other junk from your lawn. These aren’t features that need to be in every single Facebook game, and they feel unnecessary in The Sims Social.

The Sims Social doesn’t offer a diminished experience however, just a different one. Because while the character and home building aren’t as robust as in past Sims games, the social element makes up for it. The Sims Social really lets you interact with your friends in a meaningful way, and it’s one of the few games that makes you actually think about your actions before you take them. So be cautious when you decide to call someone’s mother a llama.