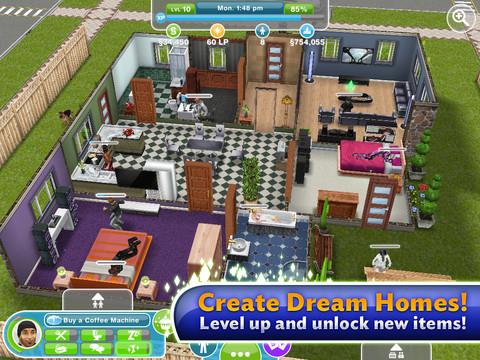 Somewhere between the The Sims and The Sims Online, way back at the turn of the century, Maxis announced a little game called SimsVille. It was, at the time, to be the next iteration of The Sims franchise and would let players control a multitude of families that all made up a single neighbourhood. The game was scrapped, and while most of its elements turned up in either The Sims 2 or SimCity 4, nothing ever really “felt” like what I expected SimsVille to feel like. Not until now.

The Sims FreePlay is EA’s second attempt at taking their popular Sims franchise and rethinking it for a freemium audience. The first, The Sims Social, has been a runaway hit on Facebook (and earned high marks right here in our review). When we first caught wind of a freemium iOS release for The Sims, we thought “oh goodie! The Sims Social is going mobile.” Much to our surprise, what EA delivered was something much, much better.

Rather than a social offering, FreePlay is a beautiful rethinking of The Sims 3. The game plays largely like previous mobile entries in the series – you’ll be able to build, dress, and socialize to your heart’s content – but in FreePlay, actions happen in real time. So if your Sim is hungry and wants a snack, it’ll take 20 seconds for the action to complete. If he wants to have a deep sleep for 7 hours, it’ll take 7 hours.

It’s an element that borrows a page right out of FarmVille and the majority of Facebook games, and like those too, you’ll be able to complete things early using the in-game premium currency. But unlike most games that use these time-delay elements, it thematically makes sense here. When it’s 10:45 on a Wednesday morning in real life, it’s 10:45 on a Wednesday morning in The Sims FreePlay. If you’re going to kill four minutes checking out the news on TV, your Sim would kill four minutes doing the same. There’s no fast-forward button here – this is real life.

The Sims has always been about recreating the human experience as authentically as possible, and using timed gameplay elements like this just makes sense.

“But what,” you’re might ask, “am I supposed to do while my Sim sleeps for the night?” Play with other Sims, of course! 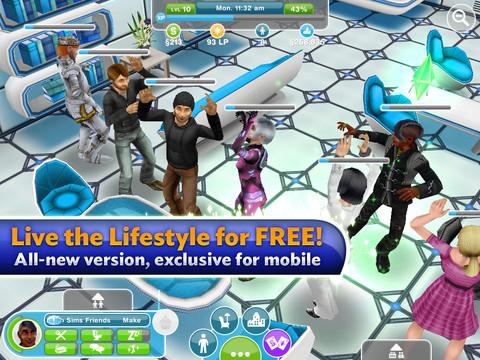 If, like myself, you’ve been waiting 10 years for that true SimsVille experience, FreePlay is where you’re going to find it. While one Sim might be working in an art gallery for the afternoon, or watching a movie, or just having a nap on the couch, you can jump to any other Sim you’ve created in your town and interact with them. Maybe you’d like to send them to the house of a third Sim to chat for awhile. Or have a party. Or just put them to bed for the night and move on to helping their neighbour find a job. It’s all up to you.

Sure, previous games have let you create additional homes where you control different Sims, but until now, none has ever given you ample reason to do so. If your Sim is planning on snoozing all afternoon on the couch, there’s finally real motivation to have you play with somebody else.

The mechanics of The Sims FreePlay feel great, with camera turns and zooms simple and intuitive, taps on items always registering well, and a great top-down view once you enter into “build” mode to place furniture or create rooms. As you’d expect, the level of customization here is staggeringly deep. There’s plenty of content – but again, with a freemium twist. Some of it can be bought using standard currency and some using premium. Much to our delight, the pricing strategy isn’t terribly aggressive, and you should be able to have plenty of fun in The Sims FreePlay without even thinking of spending a dime. 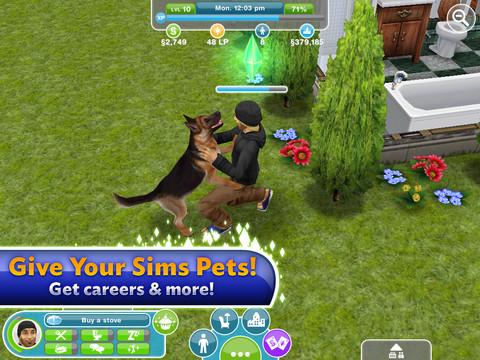 The only thing that seemed to be missing here was a social element. It’s something of a surprise considering how well The Sims Social was received, but then again, freemium doesn’t always have to equal social. What EA has pulled off with The Sims FreePlay is great even without this, and the SimsVille style of gameplay almost makes us wonder if real social play might have destroyed the fictional social dynamic that players create for themselves.

Fiddling with a popular formula is risky business, and trying to turn that formula freemium is doubly so. But with The Sims FreePlay and The Sims Social before it, EA has proven that The Sims was the perfect candidate for such a transformation. FreePlay takes everything that’s great about The Sims 3 and twists it into a new freemium shape, without relying on the changes to the formula that took place in the series earlier freemium iteration. Kudos to EA. This is one of the best games of its kind.