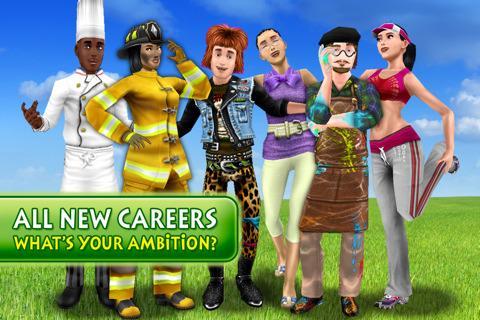 Ambition pays off in a big way

Somehow, in my long career as a gamer, I’ve managed to avoid The Sims franchise – though I’ve often laughed at my friends who found themselves addicted to such games. I never really understood the appeal of the concept: micromanaging someone else’s life just didn’t seem all that fun. Now, having spent some time with The Sims 3: Ambitions, I finally get what my friends have all been raving about for so long.

If you’ve already played The Sims 3 on the iPhone, Ambitions will feel like a robust expansion pack. If it’s your first time dealing with the series on the platform, then this is an incredibly impressive game all on its own.

When you start, you can either import a Sim character from another Sims iPhone game or create a new one from scratch. The Sims are fairly customizable, though the combinations aren’t as varied as they would be on the computer. Still, the limited number of hairstyles, facial features, and outfits can be combined for a wide variety of looks. Once you’ve established your Sim’s appearance, you have to choose five personality traits; I made my Sim a friendly, good-humored, active, explorative, genius jack-of-all-trades.

Something that will grab your attention right away is just how impressive the game’s presentation is. Not only does it feature some excellent 3D graphics (complete with a rotating and zoomable camera), but the sound effects are great, too. You can even play your music library in the game, which is a small-but-effective way to keep things feeling fresh when you’ve been playing for hours.

The “ambition” focus of the game is based around turning your Sim’s passions into a viable career. There are several professions to pursue, including rock star, chef, pro athlete, teacher, and ballet dancer. Since I work in the real world as a part-time illustrator, my Sim’s first job was as an artist (the starting position being “Finger Painter”). In order to advance along a career path, you’ll have to get your Sim to practice certain skills. For his career, my little guy had to master the art of painting (accomplished by painting numerous pieces on an easel), acquire a certain amount of friends, and appreciate an increasing number of paintings around town.

Of course, these tasks took a while to accomplish. By the time my Sim had been promoted to “Art Dealer”, I’d sunk roughly four or five hours into the game. Seeking another challenge, I decided to have him quit his current job and enlist as a firefighter (meaning he switched from painting to practicing on a fire hydrant in his living room tin in order to get promoted), gradually moving up the chain of command to become “Fire Chief.”

Each time there is a chance for promotion you’ll be forced to engage in a specially-themed minigame tailored to your career. Some of these minigames are well-designed; for the artist’s path, I had to color in a black-and-white image. When my Sim became a firefighter, I had to put out fires from a first-person perspective, tilting the phone to the right and left in order to steer the water stream. In the case of the former, this was a fun, enjoyable little distraction. With the latter, however, the controls were clunky and the water was rather difficult to direct in a timely manner. 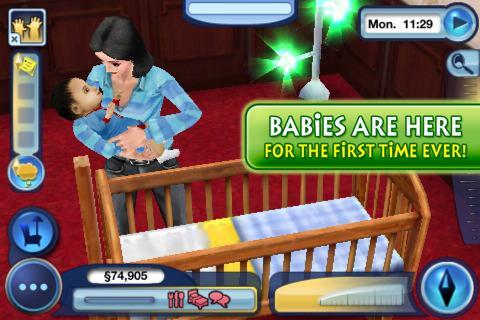 Mastering a career isn’t the only thing to do in The Sims 3: Ambitions, either. Apparently players really wanted EA to include babies in an iPhone edition of the game, and EA has finally delivered the option. Once your Sim gets married, they and their partner can engage in “WooHoo” and try for a baby. Alternately you can just get a crib and adopt a kid, but your Sim has to have at least two positive personality attributes in order to get approved.

Raising a baby requires a lot of extra effort, too. Feeding, playing with it, and paying a lot of general attention is difficult to do when your Sim has a full-time job (though, admittedly, that’s pretty much how such things work in real life). It’s effectively a second job, albeit one that doesn’t pay.

Still, there are a couple of (minor) issues to be found here. The game eats up battery power like nothing else. On my iPhone, it drained power a fully-charged battery within a couple of hours, and my iPad didn’t fare much better. The other problem is that selecting a target on the iPhone is sometimes difficult, mainly because there’s often so much stuff cluttering the screen that the game has trouble discerning what you’re trying to select. I even encountered this problem when I enlarged the game’s display on my iPad, though it didn’t happen nearly as often.

This was the first time I’ve ever played a Sims game, and now I finally get what all the fuss is about. The Sims 3: Ambitions isn’t exactly fun, but it’s addictive as hell and you can’t bring yourself to stop playing. If you’re looking for a well-made game that will absolutely annihilate your free time, then look no further: this will keep you glued to your iPhone for quite a while.

Whisper of a Rose Review