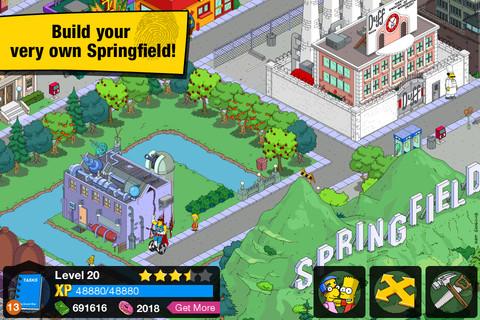 The Simpsons: Tapped Out doesn’t innovate, but it seldom fails to entertain

You have to hand The Simpsons: Tapped Out one thing: it certainly doesn’t hide its intentions. Almost every step of the tutorial pokes fun at the nickel-and-dime conventions of social city building, particularly in the form of the donuts that pass for premium currency, and much like Homer, it’s rarely subtle. At one point, standing in one of the alternate Springfields (in other words, your friends’ creations), Homer exclaims,”Wow, I’d spend money–real money–to have a town like this!” If it weren’t so flagrant in its own attempts to nickel and dime you, it’d be worth appreciating EA’s take on The Simpsons universe as satire of the highest order.

That satire even extends to the skeletal story that holds this outing together. Tapped Out starts out with an animated cinematic featuring Homer fiddling with some FarmVille clone on his “myPad,” and he’s so busy “tapping” on the screen that he neglects the gauges at the plant, triggering a nuclear explosion that wipes out Springfield as we know it.

This being The Simpsons, there’s no concern about mutations, deaths, or nightmarish scenarios that result in a society such as the one we encountered in Fallout 3. Instead, it’s an opportunity to start the town over, starting with Homer’s own two storey house on Evergreen Terrace. As Homer starts to work and build familiar landmarks such as the Kwik-E-Mart–“Work?! I thought this was a game!”–Homer’s family and neighbors start to trickle back in, providing quests, experience points, and money for items.

If this sounds just like every other FarmVille or CityVille clone you’ve ever played, that’s because it follows the formula almost to a fault. 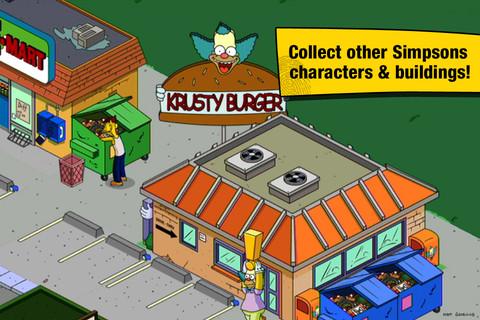 There are few surprises here; the charm of The Simpsons: Tapped Out instead relies on the way it so skillfully channels the personalities of The Simpsons characters we’ve loved so much over the past 23 years. One of Flanders’ first missions has him “condemning science,” and one of Homer’s own sees him breaking into the house next door just to watch some TV. Elsewhere, you first learn about the “Conform-o-meter” that grants bonuses to cash and XP based on your success in activities like “tree-hugging” and “consumerism” after Lisa nags Homer about the need for trees in the new Springfield. Best of all, true Simpsons fanatics will enjoy decking out their social spaces with optional purchases such as the famed “Springfield” sign on the nearby mountains. Just be prepared to spend a little cash if you want the best stuff–as I said before, Tapped Out doesn’t even attempt to mask the fact that it’s out for your money.

Aside from its lack of any real innovation, the only nagging problem with The Simpsons: Tapped Out is its insistence that you connect to EA’s Origin service, even if it’s only used for  online features such as visiting your friends’ parallel Springfields for daily bonuses. It’s spotty at best, and there was a long stretch during the review process when we couldn’t connect at all. If you can suffer through that, though, you’ll find a Simpsons experience that knows its audience well, and one that thus manages to nudge its way into the list of the best games of this sort to date. It doesn’t go out of it ways to innovate, true, but if Homer Simpson taught us anything, it’s that you can dish out minimal effort and still be a star.