The Serpent of Isis Review 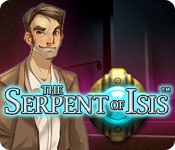 The Serpent of Isis is the latest title to combine hidden object gameplay with inventory-based puzzles, challenging mini-games and an interesting mystery story – in this case, a plot that takes you across Europe by train as you track down the culprits responsible for stealing a rare Egyptian artifact.

It all starts when you receive a mysterious note from an anonymous helper who tips you off that five robbers have taken the Serpent of Isis artifact on board the Palu Express train. You must hop on the train and recover the pieces of the artifact from each of the suspects before they can smuggle them into London (the train’s final destination).

After a brief prologue where you pack a suitcase and grab your ticket, you’ll find board the train and begin investigating various cabins and cars for clues that implicate each of the five suspects and help you to track down the artifact pieces. The setting isn’t limited to the train, however; as it travels through Europe it makes stop-overs in six destinations along the way including Budapest, Vienna and Paris, and you’ll get to explore scenes in each city to search for additional clues and leads.

In each scene, you’ll have to hunt for items in order to cross them off a list. Some of these items will be added to your inventory, and you’ll have to figure out where they can be used to solve a puzzle. For example, you’ll find keys that can be used to unlock various cabinets and trunks. You might also have to combine two items in your inventory, such as adding batteries to an empty flashlight. These puzzles aren’t self-contained either; in other words, you might find an item in one scene and then have to travel to a different scene in order to use it.

Variations on standard searches include having to investigate darkened rooms using a flashlight, and looking through a viewfinder. Each chapter contains at least three scenes to investigate, and more scenes are added the farther along you go. You get a limited number of hints per level, but you can earn more by finding extra items that relate to each suspect (such as a cigar or fortune cookie). The game offers both Timed and Relaxed modes depending on your play preferences.

If you’re a fan of clever mini-games, then The Serpent of Isis won’t disappoint. You’ll take frequent break from searching for hidden objects to complete a variety of puzzles, such as navigating a maze in Vienna (in the dark, no less, with only a flashlight to guide you), decrypting symbol puzzles, and cracking safes where the solution isn’t quite as simple as finding the right numbers on a piece of paper. All of these puzzles can be skipped, with the consequence of adding minutes to your total completion time.

The Serpent of Isis is a well-made adventure with an interesting story, polished production values, decent gameplay length, and good replay value in the sense that you’ll be given different lists of objects to find each time you start over.

That said, the game’s blend of adventure and hidden object gameplay doesn’t always work smoothly. Objects are fairly well blended into scenes, but they’re your typical mishmash of insects, bunches of grapes, golf clubs, and other random junk. As such, it can be hard to tell what represents an object that you’re supposed to use an item from your inventory on, and what is just random clutter. (A white highlight around the object does help a bit, but certain puzzles still feel overly obscure – especially given the fact that you have to change scenes in a lot of cases, too.)

Occasionally, too, I found that there was more than one possible object in the scene to click on that fit the list’s description (such as two butterflies, but only one of them was the "correct" one.)

Frustrations are generally few and far between, however. If you enjoy the kind of hidden object game that mixes in some other types of puzzles as well, then The Secret of Isis shouldn’t disappoint.

If you liked this game, try Alabama Smith in Escape from Pompeii, Cate West – The Vanishing Files, and Agatha Christie: Murder on the Orient Express.