The Secret of Margrave Manor Review 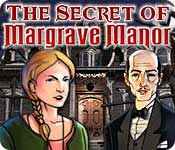 Haunted mansions are more common than you’d expect, and all share unsavory pasts. Many claim to be the “most haunted” buildings, including the Lemp Mansion in St. Louis (where pianos play by themselves) and the Hotel Monteleone in New Orleans (famous for it’s vision of ghostly children playing). The Secret of Margrave Manor is a hidden object mystery that has you exploring the sprawling grounds of a decrepit family mansion with a few “ghosts” of its own.

If you’ve played Mystery Case Files: Ravenhearst, you will see some similarities in the storyline and general environment. However, the two games are not precisely the same, despite being 1st person hidden object mysteries involving a love story and large manor houses.

Edwina Margrave has never known her real family, being orphaned as a young girl and raised by her Godfather. On her 20th birthday, she receives a 10-year-old letter and mysterious stone from her Grandfather, promising to reveal many family secrets. Arriving at the family mansion, she meets the rather odd Butler, Gerard, who informs her that her Grandfather has been missing. As an archaeologist and treasure hunter, it’s not unusual for him to disappear when he’s doing research.

Before he disappeared, he left strict instructions that no one was to go to the second floor, but Gerard believes that Edwina’s stone may be connected to a mysterious door that cannot be opened. Playing as Edwina, you must solve the mysteries of her Grandfather’s disappearance and uncover the dark secrets of her family.

As in all hidden object games, the goal is to sift through cluttered rooms and find different hidden items. The list of items you need to find is displayed on the bottom of your screen. As you find objects, more items on the list are revealed to you. Generally, you can only search for three to four objects at a given time, so you must find those before seeing the others on your list. For each room, you’ll have 15 minutes to find all of the objects, and you’ll start off with two hints. For every three minutes that passes, you’ll receive a bonus hint. This is independent of how many objects you’ve found, or how often you’ve clicked.

Following the “faulty lighting” storyline, some of the rooms with be pitch dark, and you’ll be using a flashlight to spot the objects. This means scrolling around the room with just a circle of light, which is not as hard as you’d expect. Occasionally, you will find a crest piece, which completes your searches in the room no matter how many objects you’ve found.

When you’ve completed all of the rooms in a level, you’ll be asked to piece together a letter that furthers the story development. As each level is completed, you’ll also unlock new rooms to play in freeplay mode. In freeplay mode, you can play any room with no time limit, which is useful if you want to practice for the timed game.

As you play, you’ll be gradually rewarded with objects which you found in the mansion. If you select “View Collection” in the main menu, these objects will be laid out in the collection’s room, and you’ll be told the percentage of special items found. This tells you roughly how far you are in the game.

The sound effects are great, and really set up the creepy atmosphere with wind blowing, footsteps approaching, and wolves howling in the distance. The music is generally pleasant and suitable, too. And, if you want a game with a decent length, you’ll certainly find that here – t’s really, really, really long. If you’ve played through the trial, chances are you’ve only beaten 2% of the game.

On the downside, the rooms are exceedingly cluttered. While that’s generally the idea of a hidden object game, the degree of clutter can make finding things tedious, especially since you’re searching for only a couple of objects at a time. The items are not accurately sized, so a key may be enormous and some pliers tiny, or a shower head may be stretched horizontally and distorted. These objects reappear persistently, so once you’ve spotted one it’s easier to find it again.

Another big drawback is the fact that in spite of having a huge number of objects in each room, most of them repeat level after level. There’s a postage stamp in every scene, along with the same candelabra, UFO, gray sweater, hammer, anchor, statue of liberty, Santa Claus, etc. The artwork is also somewhat inconsistent, with the character art being hand drawn, while the background art is photorealism.

While one can’t help but applaud The Secret of Margrave Manor for it’s length, story, and atmosphere, the actual game play can be monotonous because of the repetition of objects, and frustrating due to the abundance of room items. Hidden object mystery fans will likely enjoy the challenge and never-ending gaming, but for more moderate players it could become tiresome as it progresses.