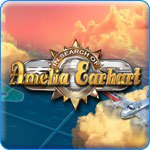 This flight into the past begins in 1937 in Chicago. Christine Barker, a clairvoyant and Amelia Earhart fan inspired by the pilot’s courage, follows Earhart’s adventures from the first flight to her disappearance with help from her gift. The Search for Amelia Earhart is the aviation version of shipwreck-focused Nat Geo Adventure: Ghost Fleet. The intriguing story of Earhart’s travels covers both the true story and a little creative license in this average hidden object adventure.

The game tells the story through dialogue that occurs between scenes as well as when you find specific items. You’ll follow Christine over the years and pick up various tidbits about Amelia’s history.

As with any hidden object adventure game, you’ll see occasional found items added to your inventory. A handful of items appear grayed out on the list indicating you need to do something first before accessing them. Christine sometimes revisits scenes to use an object that she picks up in another scene. Some objects work with other items already in your inventory.

Christine has a Coordinator Locator gadget to help her figure out where she is in the world. She needs to collect coordinates and plug them in the right places by color and shape. Once done, she moves two arrows on a grid to match them as closely as possible to the box on the map. The closer she gets, the more bonus hints she receives.

You begin with five hints with the possibility of winning up to nine hints by completing mini-games as fast as possible. The mini-games blend nicely with the story.

The mini-games have a shorter timer separate from the hidden object adventure clock. The jigsaw puzzle where you put pieces together and rotate them appears frequently. Another recurring mini-game requires your flipping puzzle pieces by rolling the mouse pointer over them until they match what Christine visualizes. This turns tedious because it requires precise movements. Occasionally, you compare two scenes with one representing what Christine sees in her mind.

Both modes are available at the start of The Search for Amelia Earhart with no unlocking required. You can choose to go for a challenge with a timer or take a stroll in the game without any pressure. The timer won’t test experienced players on the hidden object scenes. However, the mini-game timer might beat them a few times.

You can earn trophies for completing levels and getting through them without skipping mini-games or using hints. You can’t earn all the trophies on the first round trip through the game. Those wanting to win every trophy will be motivated to play another round. Be warned: Nothing changes in the game play.

While scenes rarely repeat, the mini-games may become grow tiresome after a few rounds. The Search for Amelia Earhart leans more toward hidden objects than point-and-click. Many of the hidden objects have nothing to do with the story, a common problem in other games.

Some scenes have subtle animation that annoy and distract especially in the mini-games. Since you can skip all mini-games after so much time passes, the skip button shows up with constant and noticeable animation. Not only that, but story updates appearing after finding a specific object is more disruptive than helpful. The developer may have been trying to keep the story in bite-sized parts, but the interruption isn’t worth it.

The game has a few misidentified items. You may need to find a club several times. It’s accurate one time, but not the other because the hint reveals a four-leaf clover instead of a club. A scene full of pictures lists "pictures." It turns out they’re Polaroid-style photographs. "Photographs" would be a better term. And then there are turtle bones that aren’t quite what you expect.

The game lasts for three to four hours, about average for a hidden object adventure game. The Search for Amelia Earhart offers a fun way to learn about this accomplished aviator and her story. It makes a wonderful game for a family with younger kids, aviation fans and people interested in history. Those desiring a challenge won’t find it here.