Home / Reviews / The Scruffs: Return of the Duke Review

The Scruffs: Return of the Duke Review 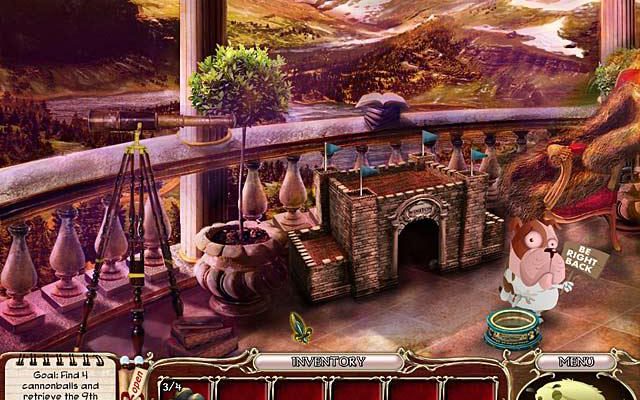 It’s been a while since we’ve seen the Scruffs. Back in 2008, this tight-knit, googly-eyed family hit the casual game scene in an entertaining and unusually creative hidden object title called unsurprisingly, The Scruffs. This year, the Scruffs are back in a fun and hilarious sequel called The Scruffs: Return of the Duke. And this time, the family’s goal is twofold: to oust the usurper of Scrufford Castle, and to restore Grandpa Scruff to his rightful place as the Duke of Scrufford.

To be honest, judging by the game’s promotional screenshots, I wasn’t terribly excited about Return of the Duke. I love the rich, elaborate graphics found in the best hidden object games, and the Scruffs, in their flat cartoonishness, just didn’t light my fire. Depicted as faintly unhealthy bobble-headed folks with stick bodies and dark circles under their eyes, they looked like a prime example of poorly rendered 2D goofiness. After playing the game, I still think there’s a bizarre disjuncture between the flat, simplistic character art and the beautiful, highly-detailed environments, but I’m glad I didn’t let that dissonance prevent me from finding out what the Scruffs really had to offer. If I had, I would have missed a whole lot of fun. 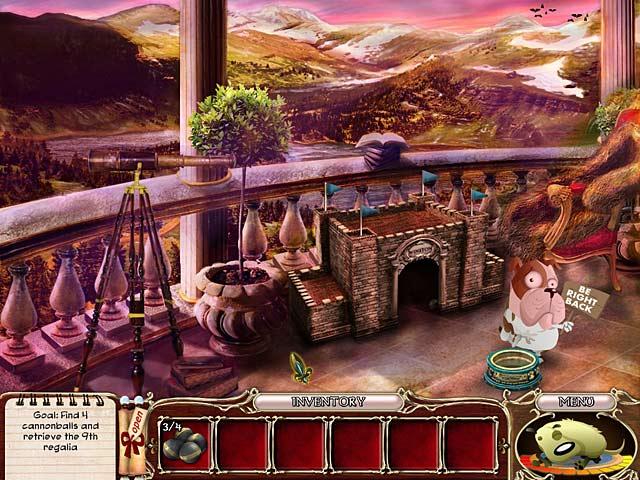 Since we last saw the Scruffs, they’ve come back to Scrufford Castle, the towering heart of the quaint village of Scrufford. As a friend of the Scruffs, you accompany them to restore Grandpa Scruff to his rightful place in the traditional seat of the Duke of Scrufford. To their—and your—chagrin, you find out that the seat is already occupied by an imposter who’s none too keen on stepping down from it. Fortunately the law of the land states that the Duke of Scrufford can only legitimately claim the Dukedom through ownership of the official regalia, a collection of ceremonial items that have been missing for decades. It then becomes your job to seek out the Knights of Scrufford, legendary guardians of this royal regalia.

Most hidden object games rely on an alternating formula of puzzle/hidden object scene/puzzle, and The Scruffs: Return of the Duke is no different. In this case, however, we see some interesting variants on the theme. For one thing, the hunt for the Knights creates a specific narrative structure that repeats itself throughout the game. You start by seeking out a quirky character (it could be a doctor with multiple personalities, an obsessive-compulsive maid or a loopy holy man) and that character then asks you to find things for them. You find their things, and they in turn present you with a scroll which starts a series of hidden object scenes. Once the hidden object hunts are done, you’re asked to solve a specific puzzle and once that’s done, the quirky character (aka—the Knight) presents you with a piece of the regalia. 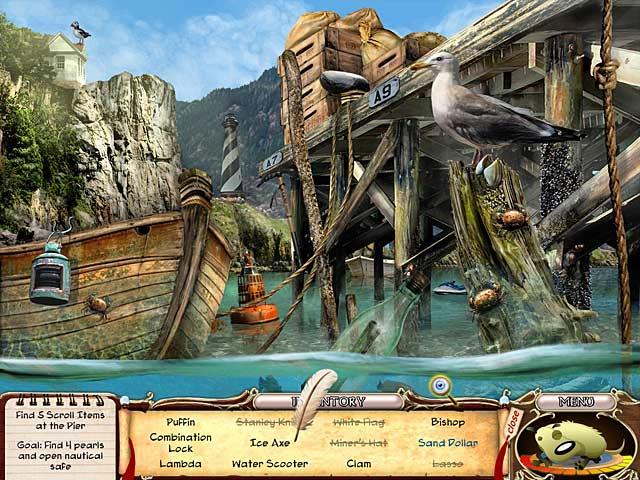 The game never varies from this pattern, and without skillful handling it could easily have become a bore. Thankfully the savvy team at Sweet Tooth Games makes every step in the journey something to look forward to through the its imaginative characterization and hilarious writing. Everyone you encounter is a caricature, and all of them are highly amusing. My personal favorite is a seemingly awkward policeman whose crazy cockney speech has to be translated for you to understand what he’s saying. My other favorite character also functions as a game mechanic—Scruffy the hint dog. Rather than clicking a hint button that makes an arrow or a sparkle appear on screen, when you need help you click on Scruffy who helps you out by getting increasingly excited, the closer you get to your goal. If you’re in the wrong area entirely, he’ll wake from a snooze just long enough to hold up a sign saying, “check somewhere else”. This small but highly effective touch proves that opportunities for amping up entertainment value are everywhere, and demonstrates how rarely most games take advantage of them.

In addition to great writing and characterization, amazing voice work (featuring a wide range of U.K. accents) goes a long way toward upping the game’s fun factor. The music too is fun and quirky, and although this isn’t a collector’s edition, you do get a few extras in the form of concept art and one of the cutest extras I’ve seen yet—a “4D” template that you can print out and fold into your very own desktop Scruffy.

The quality of The Scruffs: Return of the Duke will hardly be a shock to fans of The Scruffs. To gamers who missed the first game however, it might come as something of a surprise. Whichever camp you fall into, if you love hidden object adventures and are looking for a break from the spooky, ghost-ridden games that dominate the genre, you owe it to yourself to make a play date with the Scruffs.