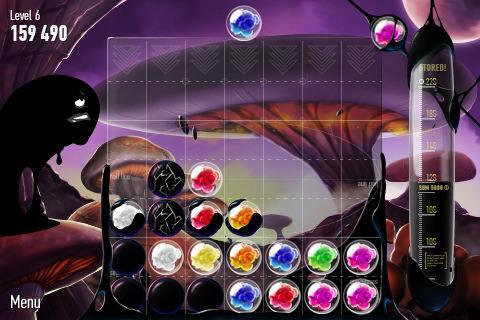 I have reviewed over a hundred games here on Gamezebo. I don’t expect everyone to agree with my opinion, but I do expect to be able to play a game based upon what it tells me to do. The Screetch told me repeatedly that it was a match-three title. Never before have I felt so mislead by such a simple description.

Oozing with personality, The Screetch presents itself as a simple match-three affair wherein you are trying to capture black, gooey creatures called Screetch. By making matches to adjacent pieces that are covered in Screetch, you fill a vial on the right side of the screen. Once it’s filled, you proceed to the next level.

When playing at first, Screetch seemed to grow rather quickly over the icons in the game. Or, at least that’s how it appeared. If I worked too slowly, most of the board would look like an oil slick. And since a fully-Screetched piece needs a few matches before it becomes truly usable or clearable, things got pretty dark, pretty quick. Granted, there is a power-up of a lightning-infused piece that Screetch won’t grow onto, and that clears a cross-shaped section of the board, but you’ll still have your hands full.

The problem is, that’s not how the game is supposed to be played. The three-panel “help” screens don’t tell you that this game plays more like Othello. The Screetch react to your moves, trying to block your ability to make matches and clear them. As such, I was trying to play the game using traditional match-three strategies: moving quickly, trying to “beat the clock” either in the form of a timer, or obstacles like freezing icons. So when I would watch the Screetch grow after I dropped my colored piece I would try to play faster, which would in turn make the Skreetch grow faster still. After about five hours like this, you can imagine the frustration I was feeling.

Once you realize that the game isn’t a match-three as it claims, but rather a competitive logic title, the gameplay changes from maddening to dynamic. Outsmarting the Screetch suddenly became a pleasure rather than agony. Since The Screetch is a turn-based game, you can take your time planning where to drop your next piece in an effort to beat the titular villain. 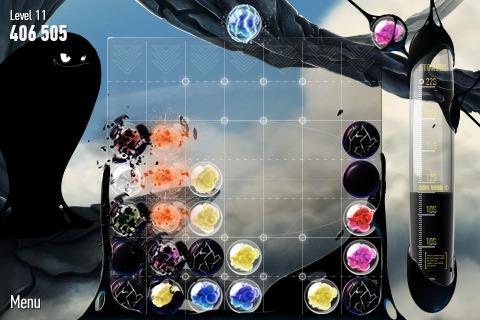 Graphically, The Screetch has tons of character. Not on the same level as World of Goo, mind you, but definitely up there. The board and its pieces are easy to see, with lots of detail. In a wonderful move to make the game more accessible, The Screetch offers a colorblind mode, which actually makes things easier to see even for non-colorblind gamers. In terms of audio, The Screetch has a cool, pulsing soundtrack, but why the developers felt the best sound for confirming menu button presses is the “submarine” system sound for the Mac remains a mystery.

The big problem with The Screetch is that it simply doesn’t tell you how to play it! Rather than stating that you are playing turn-based battles against the black goop, it’s constantly advertised, both on the App Store and in-game, as a match-three. This truly presents some expectations that totally mess up how you think you should play. Again, I’m an experienced gamer. I shudder to think what a newcomer would think about The Screetch as a match-three. I’m certain they wouldn’t have given it the five-hour trial I did.

All that is needed to make The Screetch a better title is a real tutorial about how the game is supposed to be played. This is a major oversight on the part of the developers. I guarantee that if they simply let gamers know what’s going on with The Screetch, they would definitely have a popular hit. As it stands, The Screetch is a great logic teaser as long as you realize that’s what it is.