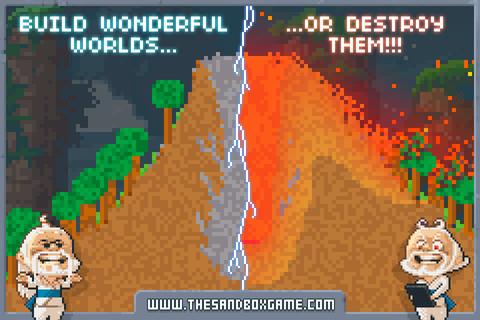 Do you want to be a vengeful god or a happy god? Choose with The Sandbox.

Have you ever thought about how the world might be a sandbox, and God might be a kid just playing in it? That’s, like, deep and stuff. It would explain the chaos that envelopes life at every moment, and we’d also have an answer for all the cat poop lying around. The Sandbox for iOS lets you muck around in your own digital universe, and heaven help whatever life form moves into your world of oil, steel, and fire.

In The Sandbox, you are a god. Eventually. You begin as a god-in-training, and an elder god walks you through several scenarios to help you grasp what you’re capable of. Once you’ve completed a few tutorials, you can access “Free Play,” which lets you put all the elements and skills that you’ve gained to good (or bad) use.

Indeed, The Sandbox plays like a simplified, two-dimensional version of Minecraft, a game that’s more or less regarded as the definitive sandbox experience. But despite the fact that The Sandbox restricts you to a single screen at a time, there is still a mind-boggling number of worlds you can create with the elements at your disposal. Everything interacts: the sun evaporates water, which forms clouds, which rains water back on the ground. Water mixes with sand to make mud, which can cradle trees and plants. Rock presses down on sand, which makes oil. Lightning storms zap metal and charge it with electricity. Lava burns everything. And that’s just a start.

You can treat The Sandbox like an interactive Microsoft Paint canvas; you can even upload your creations (and access other people’s) to let strangers nurture or destroy as they see fit. Or, you can play through the game’s multiple story scenarios, which challenge you to solve a problem using the elements you’ve acquired up to that point. When you succeed, you unlock the ability to use another element.

These story scenarios are The Sandbox‘s biggest flaw. Once you unlock an element, you’re typically required to use it in the next scenario. However, in addition to unlocking elements, you must pay for them using “Mana”. You acquire Mana by completing challenges and earning achievements, but it’s not long before the price tag for Mana outstrips what you have in your pocket.

The Sandbox is a free-to-play game, but you can buy Mana Packs via microtransactions. You can probably see where this is going. 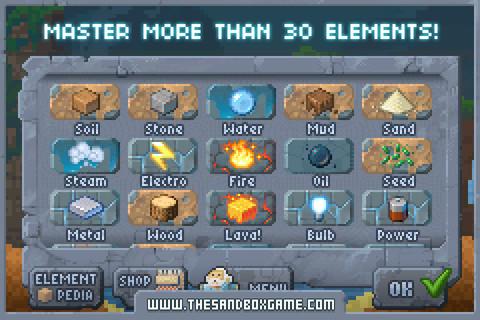 There are some other comparatively minor issues with The Sandbox, such as a fiddly zoom option and a scroll mechanic that simply doesn’t work well. Despite its flaws, though, The Sandbox is a remarkable little app that will keep you busy for ages. It’s hard to have any serious grievances with a game that molds itself according to your mood. Got a hankering to create something? The Sandbox has you covered. Want to end it all in a blanket of fire and lightning? The Sandbox can scratch that itch, too.

The Journey Down: Chapter One Review