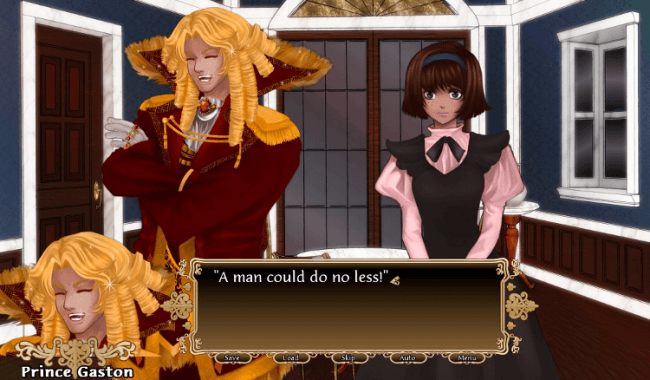 A brave young woman of noble birth must protect her Prince from the deadly intrigues of a foreign court.

For the last decade, Georgina Bensley, founder of visual novel/RPG-making company Hanako Games, has brought us anime-inspired, female-friendly fare packed with action, romance and feats of derring-do. This month, Bensley takes us on yet another fascinating—if somewhat imperfect—adventure in her company’s latest visual novel, The Royal Trap.

The focus of The Royal Trap is the relationship between Prince Oscar of Ocendawyr and his companion and protector, Madeleine “Maddie” Valois. As the second (read “unimportant”) daughter of a low-level noble family, Maddie’s prospects are bad, so when the opportunity arises to escape a life of station-induced poverty by working for the prince, she grabs it. Her job’s to keep the young scion of Ocendawyr out of trouble while grooming him for the throne, and her role becomes critical when he’s invited to present himself as a potential suitor to the princess of a rival kingdom.

For anyone who’s unfamiliar with visual novels, it’s important to note here that they aren’t games as the term is generally understood; they’re more like animated graphic novels with more text and branching storylines. The interactivity of such things is mild—clicking merely advances the text or allows you to choose between dialog options that force the story down one narrative path or another. As such, the best visual novels offer a large degree of replayability through alternate endings. They also skillfully manipulate your emotions, making each mid-story choice agonizing as you anticipate the consequences of each.

I’ll reluctantly admit, The Royal Trap is an entertaining yarn. I say “reluctantly,” because I’m usually the first to roll my eyes at romantic melodrama and romance is, without question, the crux of the story. Despite the mushy boy-girl stuff, the game’s various mysteries suck you in early and if you’re anything like me, before the soap-operatic prologue ends, you’ll be totally hooked. It helps that the character art is for the most part, very well done (albeit in the doe-eyed, tiny-nosed anime style that makes everyone look like a startled little girl regardless of gender). The backgrounds aren’t as cool, being a little flat and lacking detail, but since most of the time they’re covered by big blocks of text, it hardly matters. 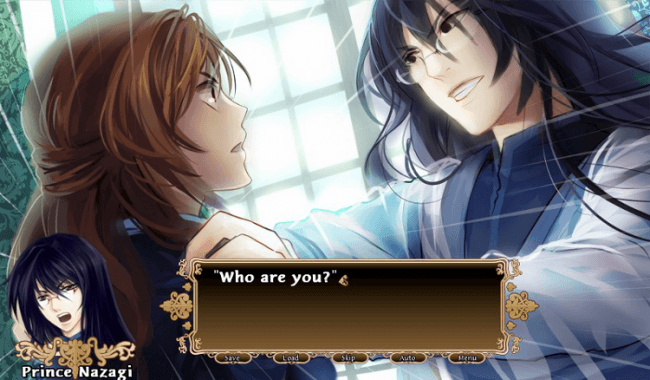 Sound is easily half the experience in a game, so it might seem strange that the only sound in The Royal Trap is music. This is actually the correct strategy for this genre however, since the sheer amount of text would demand annoying quantities of voice acting. Instead, musical themes ranging from simple acoustic guitar arrangements to full-on (and kind of embarrassing) rock-and-roll battle anthems provide whatever emotion the scenes require.

The best things about The Royal Trap are its plucky heroine Madeleine, who represents a strong character and an admirable female role model, and its cast of well-written supporting characters. Also good is the story, which diverges multiple times from anything we might expect, and explores complicated adult themes. The game’s problems are its relatively low number of narrative branches and its tendency to brush secondary characters under the rug. We’re offered only a handful of opportunities to have a meaningful effect on the story and this makes us feel more like passive observers than actual participants. In my particular playthrough, three of the potentially most interesting characters vanished completely and it’s hard to argue that that’s what the narrative intended. Then again, perhaps it was meant to be an inducement to further playthroughs? 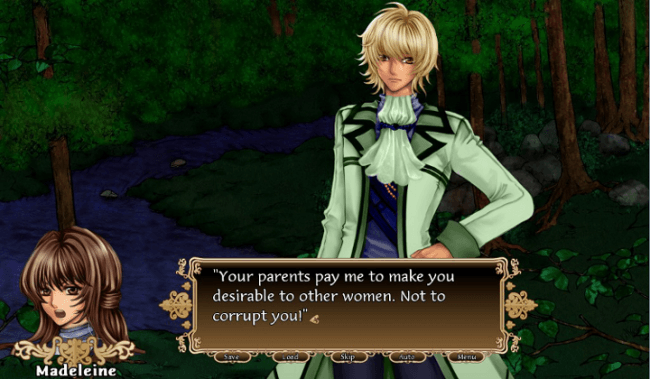 In any case, even with these complaints I can still say that The Royal Trap is a compelling visual novel. My attention was held from start to finish by its mature themes and convincing character exchanges, not to mention its impressive audio-visuals. So much so, that once I’ve gotten over the disappointing results of my first-try ending, I’ll no doubt play through the whole thing again.

Heroes from the Past: Joan of Arc Review