The Return of Monte Cristo Review 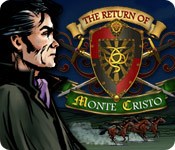 The Return of Monte Cristo brings back Alexander Dumas’ The Count of Monte Cristo‘s Edmond Dante for another hidden object adventure in which he searches for his fiancée’s killer. The detectives closed the case without ever finding a suspect, so Dante travels from Spain to Paris in this game with beautiful art work and effects in this clichéd, but eye-pleasing game.

He begins his investigation by meeting with the detective that fiancée Mercedes supposedly hired right before she died. The detective believes she had a diary and suggests Dante track it down. Like its predecessor, much of the gameplay in The Return of Monte Cristo follows traditional seek-and-find style. You look for lots and lots of objects that have little to do with the story line. Scissors, tarantulas, boxing gloves and hourglasses show up frequently among other items and they’ll appear in the same places when you revisit a scene.

The game’s structure isn’t clear. You play a handful of scenes until you find X number of objects. Then you play a new set of scenes until you locate all X number of objects. So you can’t see your progress like you could in The Count of Monte Cristo. Maybe that’s because there’s no keeping score — no losing points or penalties — so it lets you wander without any pressure to solve the murder case.

Rechargeable hints stand by ready to help when an item eludes you, but this won’t happen with experienced seek-and-finders — at least, not much. You can always check to see the silhouettes of items you’re not sure about. It’s up to you whether to look at the silhouettes, but they do a nice job of not giving too much away except for the direction the object will appear (sideways vs. up and down).

Words highlighted in blue represent objects that need another item before you can access them. Occasionally, some scenes require you to find a key to unlock doors or gates before moving on. The play becomes tedious after a while especially when a lot of the same objects appear in multiple different scenes.

The mini-games enter the scene when you need to open a door or piece things together like a torn note. You can skip the mini-games after so much time passes; however, most of them are either easy or just right in terms of difficulty. No two puzzles are alike, but the game doesn’t have many. If you’ve played enough hidden object games, you won’t find anything new in the mini-games. The standard fare includes finding matching pairs, lining up pipes, rotating circular discs until the picture lines up and reconnecting a jigsaw puzzle.

The scenes aren’t shadowy-looking, something that was a problem in The Count of Monte Cristo. The Return of Monte Cristo has an air of darkness without interfering with game enjoyment — if its monotony doesn’t you first. The game lasts for four to five hours, neither short nor long. If you like to play games with music, you’ll likely want to play your own because the game’s audio grows tiresome fast.

The Return of Monte Cristo returns to the hidden object games’ roots with pleasant graphics and a decent story to support it. This should please those who like a traditional seek-and-find game with a few mini-game breaks. Unless you play every single hidden object game release, don’t count on this one to be a delicious Monte Cristo sandwich.