Home / Reviews / The Ramp Review – A Zen Meditation on Skateboarding

The Ramp Review – A Zen Meditation on Skateboarding 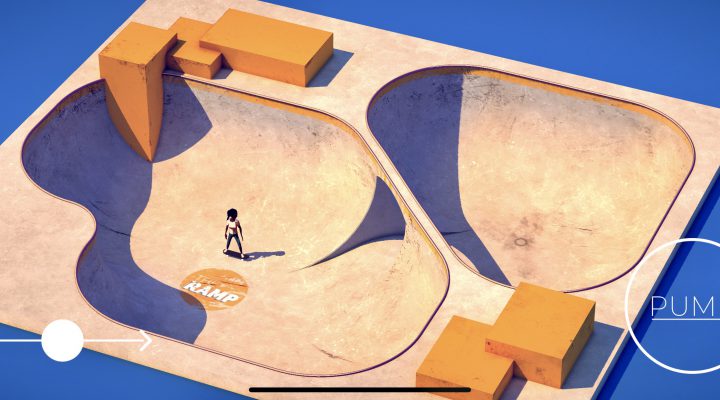 Purity instead of howling gewgaws

Can be a little fiddly

Some will mourn the lack of direction

The Ramp is a game that understands the whimsical, expressive side of skateboarding. This isn’t a sport that’s all flaming skull tattoos and terrible nu-metal soundtracks, it can be almost zen-like, a rolling meditation on form and flow.

There are no scores to chase here, no ridiculous achievements or ostentatious distractions. It’s just you, a board and a ramp. You’ve got a direction slider and a pump button, and combining these lets you get some speed going. You can pull off tricks while you’re airborne, or grind along the top edge of the ramps.

It takes a while for the control scheme to click. It’s a little counterintuitive in that you’re pumping on the flat and releasing when you’re on the ramp’s inclines, but once things fall into place there’s an effortless thrill to the experience.

Since you’re not aiming to beat a score or stretching for a goal, you’re free to experiment. Can I jump over that? Can I get an extra spin in here? But that experimentation can be as casual as just rolling, caught up in the rhythm of wheels on wood. And it’s an addictive rhythm.

The Ramp isn’t without its problems. The controls and fixed camera angle can make some of the levels a little tricky, and you could argue that there isn’t enough here to justify the price tag. The first ramp is free, but you need to pay $2.99 to unlock the other three.

But at the same time there’s a dream-like quality to the game. It’s play for its own sake, not to try and dethrone another player or reach some outlandish, policed potential. Instead you roll, and you soar, and you lose yourself in those moments of weightlessness.

The Ramp will appeal to a certain kind of player, someone looking for an experience that captures the ethereal, exploratory nature of skateboarding, not the gaudy, rebellious howl that it’s sometimes portrayed as. You’ll either love it, or you’ll think it’s a waste of time. And we sit firmly in the former category.