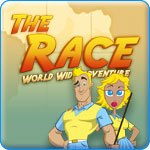 Ready for a bit of adventure in your next hidden object fix? Maybe you’d like to travel the globe on a scavenger hunt, beating the pants off other opponents and winning your way to the top? That’s the concept behind The Race, a hidden object game with a neat “reality TV” flare.

In The Race, you can choose to play in Challenge Mode (racing against computer players) or in World Explorer Mode (playing against yourself for the best score). The premise of Challenge mode is similar to that of the television program, “The Amazing Race.” Teams of contestants race around the world trying to be number one. The goal is to find all of the objects on your list before your opponent teams. You can see how well the other teams are doing by checking out the race time line at the bottom of your screen.

Instead of hints, you’re given special tools to use in case you get stuck. The “hot and cold cursor” is very cool… erm, hot. It bursts into flame when you’re near an item on your list. The strength of the flame indicates how close you are. You’ll still have to click around a bit, but it gives you a good general direction. There’s also a useful compass cursor which points you towards the first item on your list. When it spins, you know you’re at exactly the right spot.

Challenge mode tools include “the bomb,” which will knock the player who is the biggest threat to you backwards in the race time line! If you’re playing in World Explorer Mode, the bomb tool is replaced with “the revealer,” which shows you the exact location of the first object on your list.

At the start of each round you’ll be given one of each tool, but you’ll be offered more as you play. World Explorers can earn them by finding bonus silhouetted items. Challenge mode players are automatically granted extra tools if they haven’t found anything in a while. This can still happen if you’re in the lead, which is neat, since it prevents lots of frustration if you’re really stuck.

The magnifying glass lets you get a closer look at the scene. Unfortunately, while it makes objects bigger, it also makes them blurrier which kind of defeats the purpose. You can use it whenever you’d like, but don’t expect it to help very much.

You don’t need to come in first in every round in order to advance. Placing high is usually good enough. I was able to advance after winning only third place in Canada.

The quality of the objects vary. Some are clear, but lots are not. A pair of gloves is hard to recognize once folded in quarters, or a jacket if you only see the collar. Then there are the ambiguous objects on your list to contend with. For example, in Toronto, you may be asked to find a hockey trophy. The trouble is, there are other trophies in the room, and no obvious hockey design on the correct one. Or, you may have trouble finding the correct golden pyramid in Cairo amidst several other gold-colored pyramids.

In other rounds, like the Statue of Liberty scene, all of the objects are color blended, making the situation even more difficult. The trumpet, when done in green and stood upright, looked more like a microphone to me. Because of this, there’s a real temptation for random clicking. You can generally click without penalty, but if you do this too rapidly in succession, you’ll lose your cursor for 5 seconds. It’s a small penalty, but can sting if your opponents are right behind you.

Despite a bit of trouble in the artwork, the excellent voice narrating adds a lot of excitement, as does the variety of locations you get to explore. You can expect to visit scenes like Niagara Falls in Canada, the Grand Canyon in the USA, Stonehenge and Buckingham Palace in England, Easter Island in South America, the Sphinx in Egypt, the Leaning Tower of Pisa in Italy, the Kremlin Museum in Russia, and the Great Wall of China. Keep in mind, your view of these sites might be looking through someone’s bedroom window. Still, it’s a new twist. Having to monitor your opponents’ progress is also pretty neat, and a nice change from the usual “beat the clock” challenge.

On the whole, the liberal use of tools offsets frustrations, but also makes the game a bit too easy to beat. You can expect around five hours of play time, which is a good length for a casual game, although replay value is limited once you’ve won the game.

If you’re a hidden object fan who wants something slightly different than the usual haunted house theme, The Race is a cool game to check out. It’s on the simple side, so don’t expect to be blown away by the challenge. Rather, easy going (and not easily frustrated) players will just enjoy it for what it is, which is a light hearted and low-pressure hidden object hunt around the globe.