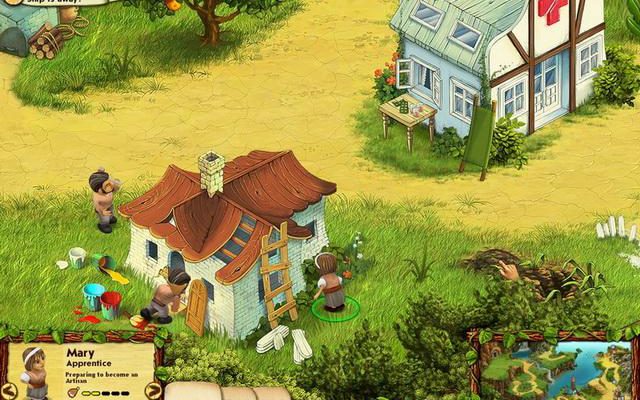 As Americans, the pursuit of happiness is a theme near and dear to our hearts and that makes Boolat Games’ cute new strategy title, The Promised Land, right up our alley. Casting us as ambitious pioneers, it allows us to follow in the footsteps of our forefathers by traveling to a new world to build a new society. More importantly however, it invites casual players to enjoy what can often be an intimidating and overcomplicated genre.

The Promised Land starts by announcing your leadership of an expedition to a wild, unsettled land. Your goal is to find a grail-like mystery called the Spring of Eternal Happiness, which is both an actual relic and an obvious metaphor. Hiring an experienced sea captain, you set out from the Old World in a rickety galleon with a mere handful of settlers. Miraculously, the ship survives the voyage and lands on a wild, untamed shore. Once there, your goals are clear: to build a prosperous colony and to bend this wild new “promised land” to your collective will. 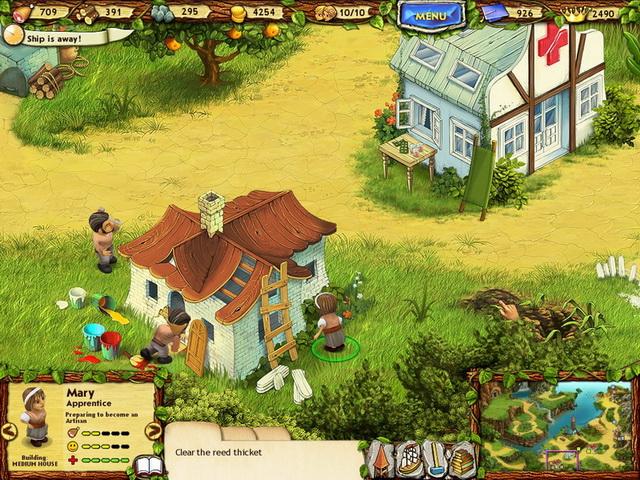 For the casual player, the words “strategy game” conjures up off-putting images of cluttered interfaces, obscure icons and menus full of confusing build trees; The Promised Land proves that such things are unnecessary. Everything about the game is friendly and inviting, from its cute, cartoony graphics to its simple menus. Its main achievement though, is boiling complicated strategy mechanics down to a handful of very basic, understandable activities. Starting with a few basic assets—your people and your ship—you start your colony by doing things like clearing land for crops and building housing. You then move on to collecting valuable resources. Your settlers are a cooperative little bunch, and you can assign them to do things like mine rocks, chop wood or gather fruit by simply click-dragging them to a location and dropping them there.

These settlers (who look like cute little bobbleheads, but far more expressive) are more than willing to lend a hand as long as their basic needs are met. Each settler has three on-screen meters indicating the three H’s: Health, Hunger and Happiness. It’s important to keep an eye on these meters because if any one of them gets too low, the settler’s work performance suffers. This sounds easy but can get fairly tricky once you have more than a few settlers to look after. Fortunately, the game avoids inflicting hair-pulling levels of micro-management on us by making the settlers proactive and largely self-sufficient. Each settler knows enough to stop work and find food if they’re hungry, or seek friendship or medicine if they’re sad or ill. Better still, they know once they’ve eaten, healed or had a nice chit-chat, to go back to their assigned job without being told. The result is a fun-maximizing balance between automation and control. 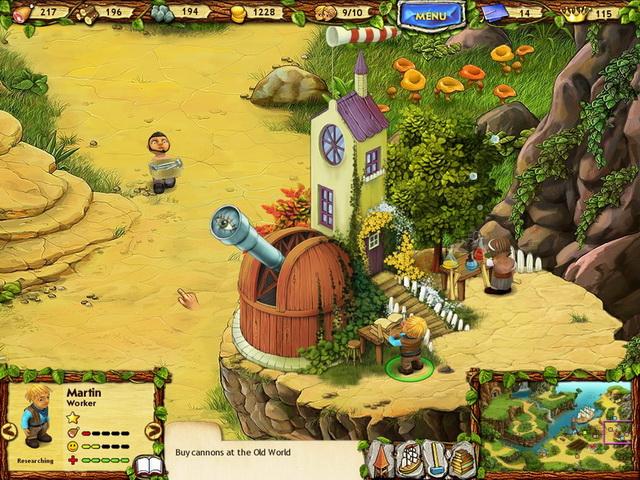 Aside from building up your colony, the other main point of the game is to create goods to trade with the Old World. Trade is key, not only because the colony’s development depends on it, but because it’s the only way to earn the credibility necessary to lure more settlers. On occasion, trade gets interrupted by pirates and then you’re asked to engage in a pirate battle. The Promised Land approaches this through an Angry Birds-like minigame where you fire cannonballs at pirates who for some perverse reason, enjoy creating precarious stacks of boards on their ships’ decks. It’s a little odd, shoe-horning this into a strategy game, but it does provide an occasional welcome change of pace.

Aside from this strange genre mash-up, The Promised Land gets two enthusiastic thumbs up for its gameplay as well as its audio and visuals. As I mentioned, the settlers are adorable, and I found myself laughing out loud at the wry faces they made when lugging something heavy around. Their surroundings are nice too, and feature lively environmental animations like waves moving and fish swimming. The music, which ranges from the pastoral to the vaguely exotic, is unobtrusive enough to add ambiance without forcing you to notice it and diverse enough to keep things interesting when you do.

The Promised Land has a lot to be proud of. A few problematic things however, do work against it now and then. First, for a title trying to make strategy more accessible, it does a clumsy job of tutorializing. The game’s tutorials are often ill-timed and as such, leave many unanswered questions. On top of that, the desire to simplify seems to have aversely affected the game’s descriptions and help text. For instance, the game instructs you to make upgrades and offers a general description of them. It does nothing, however, to help you understand the specific benefits gained by buying each level of upgrade. And the “Help” icon when clicked, also fails to address the issue. 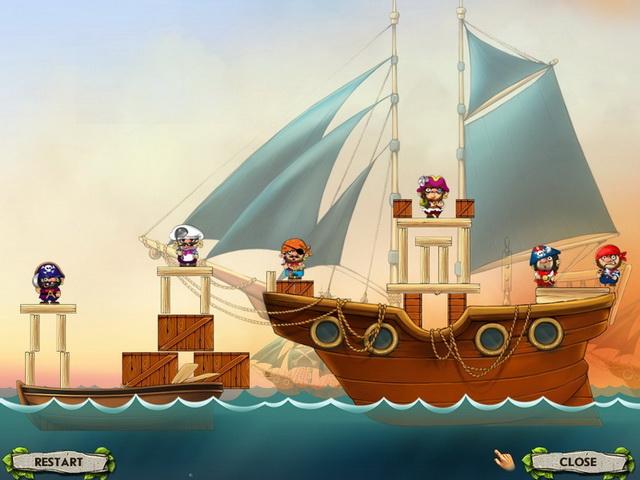 The interface can at times be similarly vague, clunky and even misleading. The trade menu is the prime example. Selling is fairly easy, but there’s no easy way to back out of selling a single item without canceling the whole sale. Further, the game offers a strangely convoluted method of evaluating the player’s gold and trade value against the price of items purchased. Far worse than these things though it the game’s lack of a fast forward button. Most games in the genre allow you to speed through the more tedious tasks. Here, the only thing you can do to make a task go faster is throw more people at it. Unfortunately, that’s not a great strategy since doing so tends to create additional stretches of boring, watch-the-numbers-tick-up idleness.

Last of the negatives is the game’s limited replayability. Once you’ve played through and found the Spring of Eternal Happiness, there’s really not much reason to keep playing. You can continue if you want to, but there’s little reason to since there are no more things to build, explore or buy.

Despite these issues, a good measure of fun can still be had with The Promised Land. The game offers great graphics, music and animation, and provides a friendly, streamlined approach to strategy gameplay. And while a little clumsy here and there, its good points make it a great introduction for casual players, to a genre they might normally be afraid to try.