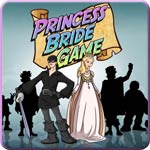 Has it really been 20 years since Rob Reiner’s classic fantasy film The Princess Bride was released? Inconceivable! But it’s true – and to commemorate the anniversary, newcomer Worldwide Biggies has created The Princess Bride Game, a title that uses a mash-up of popular casual game styles – including time management and seek-and-find – to retell the story of the maiden Buttercup and her true love Westley.

First, a disclaimer: don’t be put off by the completely out of place ‘tweeny-bopper pop song that crashes out over the title screen. If you hurry through the sign-up process you’ll emerge into the familiar tender theme from the film and be treated to an opening introduction from Grandpa, who, like in the film, serves as narrator and guides you through the five episodes of the story.

The game’s plot sticks closely to that of the movie. In a nutshell, for those who haven’t seen the film or need a refresher, Buttercup falls in love with Westley, but being a poor farm hand, Westley has no money for marriage and goes off to seek his fortune. When Westley’s ship is attacked and he is presumed dead, a grieving Buttercup agrees to marry the evil Prince Humperdinck. To make a long story short, Westley returns, Buttercup is captured, and Westley must save her from Humperdinck’s clutches with the help of a few friends.

There are a lot of classic moments in The Princess Bride, and the game highlights five of the most memorable ones. The twist, though, is that the gameplay for each episode is completely different.

For example, the opening episode, "As You Wish," is a time management game where you control Westley as he does chores around the farm like watering vegetables, chopping firewood and collecting eggs while also responding to Buttercup’s beck and call every time she has an errand for him. In Battle of the Wits you’ll match brainpower with the conniving Sicilian Vizzini by answering trivia questions, and the third episode, The Fire Swamp, is an action platformer similar to Super Granny where you’ll navigate the treacherous forest as Westley and Buttercup, leaping and climbing, collecting jewels, and battling the R.O.U.S. (rodents of unusual size).

In the fourth episode, Miracle Max, you must help the eccentric old man find objects that are hidden around his hut by clicking on the items he wants from a list, and then create potions by adding the correct ingredients in the right order. And in the final episode, Storming the Castle, you have to construct a siege engine by going back through all of the intro and outro movies from previous episodes and finding objects hidden in the scenes – think seek-and-find but with videos, not still pictures.

One very interesting design choice was to make the game scalable based on how much you enjoy playing one particular genre. You only actually have to play the first five levels of any episode before you can continue, but if you’re enjoying yourself you can keep playing and finish all 20 levels. The first five levels are admittedly quite easy, especially the time management challenges, but the deeper you delve, the harder the challenges become.

The advantage to this is that if you don’t care for a particular style of gameplay – say, killing rodents with a sword – you can only play the minimum number of levels to move on. But if you love searching for hidden objects than you can play all the way through Miracle Max’s episode.

The Princess Bride Game boasts some excellent production values for a casual game, especially in the graphics department. Environments are bright and detailed, and familiar characters are brought to life in fully animated cartoons that are drawn in a unique style all the game’s own. The seek-and-find scenes in Miracle Max’s house are all hand-drawn from the ground up instead of simply using stock photos as many hidden object games do, and the objects all actually look like they belong there.

There’s ample voiced dialogue in the game, and three of the film’s actors reprise their roles: Mandy Patinkin as the Spanish swordsman Inigo Montoya, Robin Wright Penn as Buttercup, and Wallace Shawn as Vizzini. The rest of the voices are provided by sound-alikes that do a good job, for the most part (there will only ever be one Andre the Giant, though).

Granted, the game isn’t perfect. The fifth episode, though based on a unique concept, isn’t really a full-fledged episode at all but more like a quick climax. Experienced gamers will find the first five or so levels of each episode laughably easy. It’s not until later levels that gameplay starts to heat up, and unless you do go on and play extra levels instead of skipping ahead at the first opportunity, the game is inexcusably short.

In terms of doing justice to the source material, however, Worldwide Biggies follows through on the production of The Princess Bride Game with considerable aplomb. And what’s more, the game leaves us with the impression that this isn’t the last we’ll see of Westley and Buttercup.