The Pioneer Trail turns FrontierVille into an adventure

The Pioneer Trail is the biggest addition to FrontierVille yet. So big, in fact, that it has its own name and app. It doesn’t change the core gameplay of FrontierVille, so you’ll still be able to build up your homestead, but instead it adds a whole new adventuring element complete with a story and different locations to explore. It’s a worthwhile addition that adds a whole new dynamic to the game, but in order to enjoy it you’ll need some dedicated companions.

The game follows your character from the main FrontierVille game on a quest to Fort Courage. In order to get there safely you’ll need to complete a series of quests and travel through three distinct locations. As you complete quests you’re wagon will move further on down the trail. And you’ll also need some help. The Pioneer Trail lets you take three companions along, each of which fulfills a specific role like doctor or hunter. At first these characters will be random, computer generated strangers, but you’ll also be able to hire your friends to fulfill the roles instead. Because there are only three open spots, The Pioneer Trail doesn’t force you to play with lots of different friends, but it does force you to play with dedicated ones.

Very early on you’ll learn that to complete virtually every quest, whether it’s a main story mission or a side quest, you’ll need to ask friends to gift you various items. Lots and lots of items. And because you’ll only have a small pool of three friends to ask help from, if those friends aren’t actively playing with you it’s nearly impossible to progress. This makes the game great fun with a close-knit team, but almost unplayable solo. Unless, of course, you want to spend plenty of real world dollars.

Though the story is relatively simple, it’s still much more in depth than what we’re used to seeing in Zynga games. You’ll meet different character with distinct personalities, you’ll be forced to make decisions in choose-your-own-adventure style quests, and you’ll get a true sense of progression as you and your party move along the trail from one area to the next. 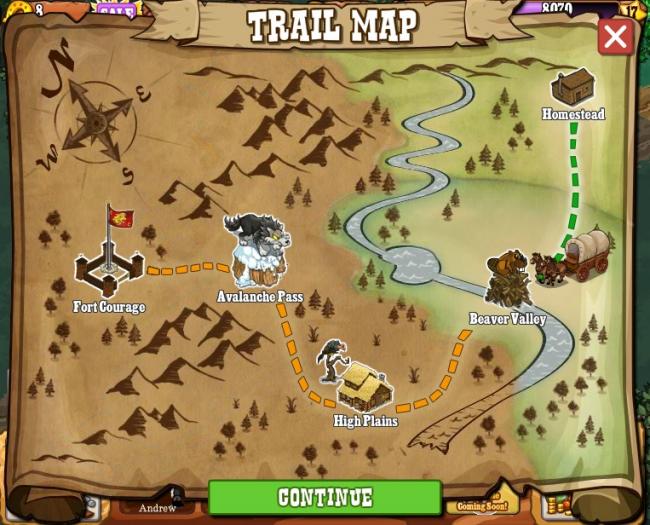 What’s really great about The Pioneer Trail is that it doesn’t change the core FrontierVille experience, it just adds to it. So if you want to ignore it all together, you can do just that. But if you want to head out on an adventure the expansion provides a nice change of pace and could be a great way to bring back lapsed players. Because if you got bored of FrontierVille, The Pioneer Trail offers something quite different. It’s just too bad that you really can’t play it solo; so make sure to rustle up some friends before hitting the trail.