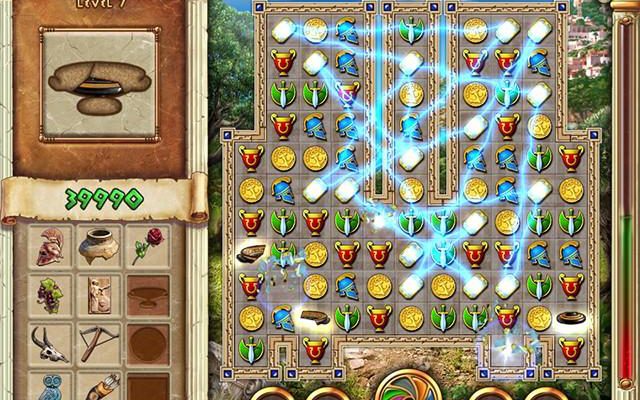 Path of Hercules is more like a slog amongst the mortals than a nectar party with the gods.

Imagine you live in ancient Greece. The gods of Olympus have forsaken you along with the rest of humanity. War, darkness, and beasts stalk the land. You cry for mercy, but above the clouds, there is only silence. The gods are angry, and they must be appeased. You realize your destiny. You steel yourself with tales of Hercules’ heroism before arming your body with holy weapons. Then you strike out into the deadly wilderness—and play some match-3 puzzles.

Path of Hercules is a match-3/hidden object game (HOG) that challenges you to regain the favor of the Pantheon, which has put Greece on its “Ignore” list following humanity’s failure to pay tribute to the gods. Some big sacrifices are in order if you want to make the gods smile again, something along the lines of the treasures that Hercules won through his famous Labors.

Winning back Hercules’ treasures in Path of Hercules requires travelling across the Peloponnese and visiting the sites where Hercules performed his mighty tasks. While you don’t actually have to slay the Nemean Lion or cut up the Hydra, you do have to solve several match-3 puzzles that have bits of treasure embedded in each board. When the bits of treasure hit the bottom of the screen, you can reap them and move on.

Solving some of the match-3 boards can be Labors in themselves. The usual traps apply: Locked tiles that can only be undone when they’re made part of a match, awkwardly-shaped boards that cling to tiles that you desperately need, and an ever-decreasing time limit (though you can play a relaxed casual mode if you so desire).

Every so often you’re called on to solve a hidden object scene. These scenes involve finding pieces of items rather than whole items, which make them something of a slog. You haven’t experienced true eye strain until you’ve squinted for a sliver of a golden shield hidden in a haystack. 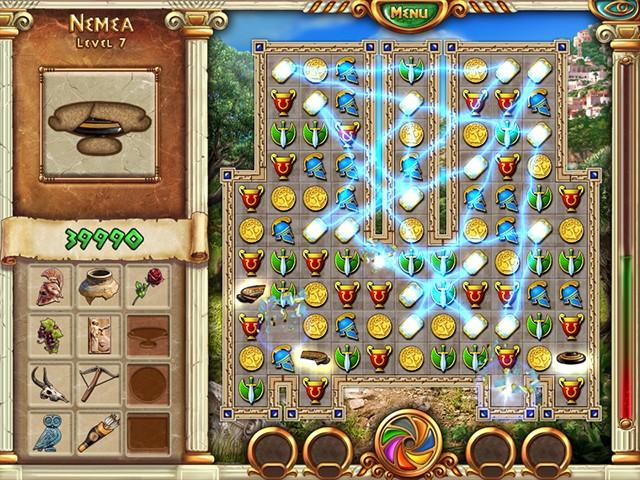 Worse, when you do manage to retrieve one of Hercules’ treasures, it promptly explodes and you have to find its pieces in another hidden object scene. It’s a tedious and uncreative way to artificially draw out the game’s play time.

Path of Hercules‘ match-3 boards are more fun to work through than its mediocre hidden object scenes. Each puzzle is accompanied by gentle music, compelling sound effects, and simple animations like rain. Still, there are few surprises that separate it from a typical match-3 experience. One notable feature is the Amulet of Hercules, which gradually fills up as you make matches of four or more tiles. When the amulet is full, you can activate it to blast away several random tiles. This little miracle of Zeus is often your savior when a treasure piece had wedged itself in a corner and the last few seconds on the timer are counting down.

Overall, Path of Hercules is fun enough for a while (and you learn about bits of Hercules’ Labors as you play!), but if you’re looking for something brand-new, you won’t find it here. Try taking out a personal ad for a casual encounter with a chimera.