The Otherside: Realm of Eons Review 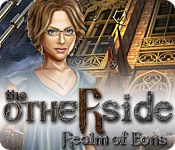 The Otherside: Realm of Eons is one of the most ambitious storytelling attempts you’ll ever see in a hidden object game. While the gameplay will feel familiar (perhaps even well-worn) to fans of hidden object games, The Otherside presents players with increasingly dreamlike and bizarre locales. Finding hidden objects or solving other puzzles moves you ever deeper into memorably eerie locations populated by creatures too bizarre to be cute.

The Otherside begins with a writer named Miranda who’s suffering a bad case of writer’s block. Her doorbell rings, announcing the delivery of a package from a surreal parallel dimension that operates on pure dream logic. Traveling to the other world, Miranda receives a cryptic plea for help from a little girl she’s never seen before. Upon returning to the real world, Miranda is obsessed with finding the identity of the missing girl.

If you’re not a fan of the recent tendency to load hidden object games down with point-and-click adventure elements, then you’ll enjoy The Otherside’s straightforward approach. This is a hidden object game that asks you to do precious little besides look for hidden objects. There’s standard "match the icon" searching, searching out sets of identical objects, or searching for objects using only their names to guide you. Occasionally you’ll break to solve simple logic challenges, but it’s back to object hunting soon enough.

What is most striking about The Otherside is its visual design. Individual levels are simply gorgeous to look upon, especially the levels that take place in the surreal OtherSide. Even levels that take place in mundane Earth locations are beautiful, like an early level that takes place in a "luxury store" laden with exquisitely rendered antiques. The graphics in the playable levels actually put the 2D cutscenes to shame, making them feel cheap and ugly.

The Otherside does feature a hint system, but you probably won’t use it often. While you can get unlimited hints, the mechanic is tethered to a very slow timer. Since the object-hunting is so straightforward, the game produces few "ah-ha!" moments. Either you simply won’t need the hints, or you’ll just use them to slowly force your way through the game’s object hunts. There are a few times you’re asked to find things with only a single non-informative word (like "Aphrodite") for a clue, or to find objects that flagrantly look nothing like the example icon you’re given.

The puzzles that break up the object-hunting are welcome but not especially inspired. The jigsaw puzzles are very good, since they can use the game’s gorgeous artwork to enhance the experience, but there are only a handful of these. The game most frequently asks you to solve what must be the easiest tangram puzzles ever conceived. You can skip them, but it’s unlike you’ll need to do so. Other puzzles include guiding a mine cart through a maze of tracks using switches and finding differences in a pair of seemingly identical scenes.

You won’t find any significant bugs or localization howlers in The Otherside. Really, the worst thing to be said about the gameplay is that it’s pedestrian and repetitive once you strip away the lovely graphics. The story is the main thing that will keep you playing. Hunting down nine juggling rings to repay the kindness of a silent clown with no arms renders the whole exercise more delightful. Sadly, the engaging story’s resolution is ultimately a bit dissatisfying. After a long build-up you’ll see everything resolved very abruptly in the game’s final level.

Still, you’ll find few other hidden object games where the protagonists experience the time loops and sympathetic magic plots one rarely encounters outside of Neil Gaiman novels. The game unfolds more than 18 levels, some with multiple locations, that take anywhere from 10 to 20 minutes to clear. The Otherside: Realm of Eons may feel a little too short for skilled hidden object gamers and it has absolutely no replay value. It’s not really a game that deserves an A for effort. It’s still an interesting and enjoyable enough experience that it merits a good solid B, though.