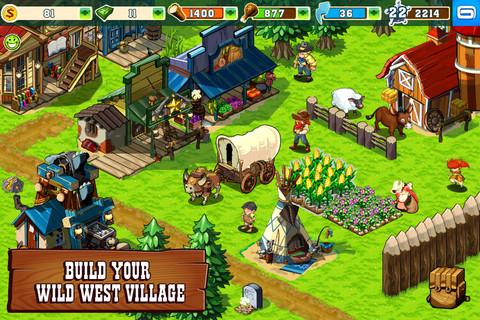 Let’s get something out of the way right up front: The Oregon Trail: American Settler is a cookie cutter copy of Zynga’s Frontierville. Now that we’ve acknowledged that, there are a few other things we should acknowledge too. Like the fact that the game was developed by Gameloft, one of the few companies that can somehow simultaneously clone a game and yet make it better. Or the fact that by adding The Oregon Trail license, they’ve managed to steer an existing franchise into a sensible new direction.

Despite its massive popularity on Facebook, we haven’t really seen a FrontierVille clone on the App Store – at least not until now – and The Oregon Trail: American Settler manages to copy the formula without missing a beat. If it were just a straight rip off though, there really wouldn’t be much to crow about here. Thankfully the folks at Gameloft had the good sense to take elements from The Oregon Trail franchise and mix them into the FrontierVille formula to create something familiar, yet fresh enough to not feel like a straight cut and paste job.

Having just braved the Oregon Trail – presumably after playing The Oregon Trail – players will take their family and their rickety old wagon and attempt to settle the area and live off the land. You’ll chop trees, plant crops, and hunt animals – all in an effort to provide for your family. Pretty soon there’ll be more than your family to worry about, as new buildings will up your population and your little settlement will quickly grow into a thriving community.

Different buildings that you’ll construct will often allow you to produce different items that will become an integral part of the game. Should a townsperson get sick, for example, you’ll want to have an infirmary built so that you can make some medicine. But that medicine can only be made if you have so many herbs, and those herbs can only be made if you have so much lumber. Likewise, other buildings may have certain requirements to operate, like the Market, which requires that you stock it with food regularly. It’s this chain of supply that’s largely at the root of American Settler, and it manages to keep things interesting in a way that makes players feel as though they’re doing more than simply tapping on buildings to collect funds, if only slightly.

At this point in the review, the game sounds strikingly similar to FrontierVille. If you’re surprised by this fact, you probably missed the opening paragraph. But where The Oregon Trail: American Settler sets itself apart is by embracing… well… The Oregon Trail. 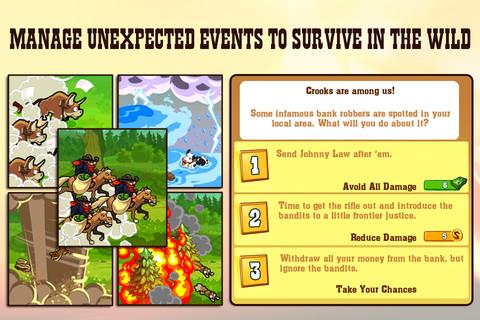 Townsfolk getting sick? Don’t be surprised if it isn’t from illnesses already associated with the series like cholera and dysentery. Elements of the classic game like this pop up every so often, giving veteran players a reason to smile while at the same time providing a welcome break from the familiar FrontierVille experience for those who’ve never braved the Trail.

The biggest Oregon shaped twist, though, is in the major events the game throws at you from time to time. Maybe there’s a flood coming. Maybe someone in the town is looking at somebody else’s wife funny. Whatever the situation, players will be given three options to handle it as they see fit. Each response has its own cost associated with it, and the cheaper the cost the higher the risk. Choose poorly and you could end up losing crops, or worse.

The game maintains the same style and visual polish of Gameloft’s earlier mobile adaption of Oregon Trail, so, as you’ve probably guessed, it’s not exactly hard on the eyes. Likewise, the soundtrack offers up a perfectly suitable western twang.

Is The Oregon Trail: American Settler a terribly original release? No. But once you accept what it is – a clone of a great game that’s not available on mobile devices yet – it becomes fairly easy to appreciate what Gameloft has delivered here. Mix in some fun Oregon Trail elements, and you’ve got a recipe for a terrific little social game about settling the Old West.