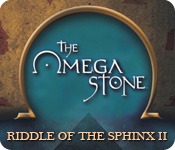 When you think about the fact that the original Riddle of the Sphinx game was created by just two people, it tends to strike you as amazing especially when you think about all the research that went into the puzzles and the storyline.  But can the 2003 sequel, Riddle of the Sphinx 2: The Omega Stone (now available as a large file download) impressive just the same with a bigger budget and the same amazing husband & wife team? Now that’s a riddle I can answer.

Continuing the Riddle of the Sphinx storyline, you awaken from your moment with the Ark of the Covenant to find that it has blown your clear across the room. Dr. Gil Blythe, the archaeologist from the first game (played by Jeffery Tobler, one of the game’s creators) is there upon your awaking to tell you some dire news. Blythe has determined that the scroll is pointing to a major event that could mean the end of the world. Now you must travel to various locations around the world and collect artefacts in order to stop this horrible event.

Your menu system allows access to your basic menu options like save, quit or game options as well as your inventory system. A quick click of your right mouse button will bring up your inventory items on the bottom of the screen during game play for easy access. This allows you to remove and replace items without leaving the game environment.

Interaction with characters in the game is limited to Blythe and your friend, Humphrey (also played by Jeffrey Tobler) who will take you to any location in the game if you hand him a location card. These conversations are triggered live action videos of the characters just talking to you. You don’t get to direction these conversations in any way, except with the items you hand them.

The puzzles in the game require a lot of reading and a lot of note-taking. Most of them required you to remember the information you read in an early document to solve them, so skipping any of the reading in the game is not suggested. Puzzles range from inventory puzzles to code puzzles to memory puzzles. I found that the puzzles’ difficulty levels tended to vary from one to the next as the first puzzle I required a cheat source and the next one I solved within minutes, all on my own.

While I was quite taken with the first Riddle of the Sphinx game, I can’t say the same for the second, which just seemed to fall flat, from the horrible acting of Jeffrey Tobler as both Blythe and Hump to the impossible to navigate environments.

The graphics are unfortunately very grainy and muddy, which made all the dark environments so impossible to search and navigate. I got lost multiple times in these dark environments and finally had to start counting my clicks forward just so I won’t get lost in the dark anymore. Finding objects in the dark became a huge cursor seeking task because I couldn’t see half of what was in the rooms to begin with. Only the mouse changing helped me figure out that something was there to pick up or interact with. In the long run, it was a shame to see such dark graphics in this game because you can tell a lot of effort that put into the details of each location in order to get them as accurate as possible.

I did find it cute that Hump, the game’s adventuring chauffeur, reminded me a lot of a writer friend, both in looks and personality. Also you can always count on me to be a huge fan of live action actors versus digital actors. Too bad Jeffrey Tobler was just so bad at acting in this game.

The soundtrack was perfect for this adventure game with its Egyptian sounding theme, and unique sound effects and music tracks that would change for each location in the game.  The music really added to some of the creepier and darker environments.

While I had a hard time recommending the first Riddle of the Sphinx game, purely based on the game’s age, I can’t say the same about its sequel. The Omega Stone has not aged gracefully in any way, and I can’t see this game being wonderful back in 2003 either. A player would still have to deal with the dark environment issues and the difficult puzzles back then too.