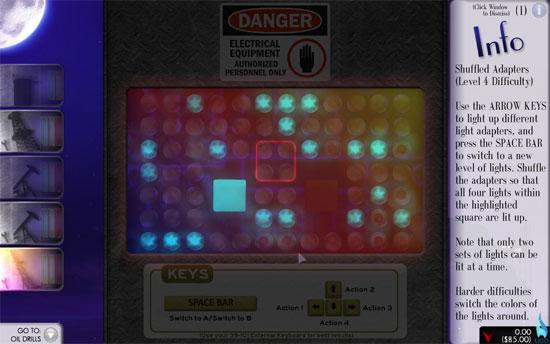 Drill upon the midnight blue, find a game equalled by only a few.

There’s never been another game quite like The Oil Blue. This strategy sim revolves around the oil industry, primarily pumping, barrelling, and selling crude oil. This probably doesn’t sound like your cup of tee; it -in fact- sounds like one of the dullest gameplay experiences ever. But it’s not. It’s lovely, it’s unusual, and it’s surprisingly enjoyable.

The Oil Blue’s plot reads more like something from an industry analyst’s report than a work of fiction. Set in the near future, the game tells you that mankind has become even more dependent on oil than before after the “oil price crash of 2024.” As a result, United Oil of Oceania is sending teams to abandoned oil islands in order to pump as much extra black gold as can be found, which is where you come in.

Players arrive on an island and are saddled with a task -such as earning a specific amount of money or selling a certain number of oil barrels- within a number of days. At the beginning of the game, you will start with a couple of machines to control oil drilling and pumping. The machines’ workings are explained quickly and efficiently, and monitoring the information they present becomes both fast-paced, addictive, and fun.

These machines have a series of gauges that you have to keep constant vigil over in order to keep things running smoothly. These machines will tell you when to start pumping for oil, when you need to repair drills (or derricks, pump jacks, and rigs) via a fast-action minigame, when batteries need to be changed out, etc. If a drill breaks or runs out of power, any oil due to be pumped and barrelled is lost. 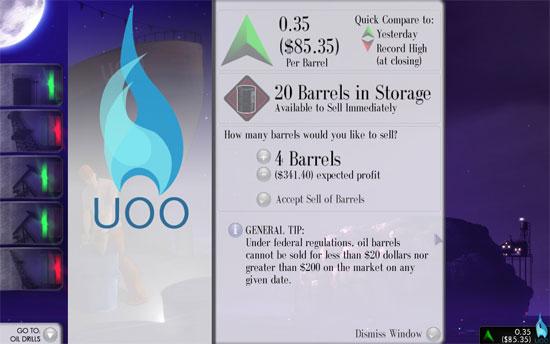 Aside from all this, you’ll also have to sell oil on the market in order to make the largest possible profit. This is accomplished by making a sale when oil is valued at a high amount per barrel. This is, essentially, a waiting game that one plays with the market, holding out until values reach a high level while making sure you don’t run out of storage space. All the islands you own will also net you a tidy profit, though this income is heavily taxed by UOO and doesn’t bring in nearly as much money as shrewd market manipulation will.

There’s also a slight role-playing game (RPG) element to the game thanks to the fact that players earn experience points to gain ranks and level-up their equipment. Increasing ranks will also unlock in-game bonuses. 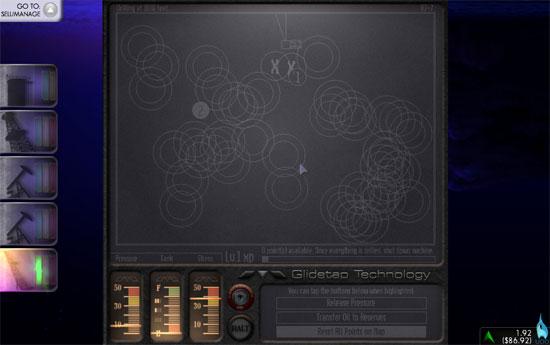 One thing that particularly took me by surprise was The Oil Blue’s style. The music was surprisingly subtle, and actually felt a bit soothing as I listened. The same could be said about the graphics, which are simultaneously lovely and simple (though never basic or ugly).

Games like The Oil Blue are always a pleasant surprise. We often expect nothing from them and they deliver an experience that is nothing sort of a joy. Vertigo games should be proud of what they’ve created here, and anyone interested in playing something great should check this out.