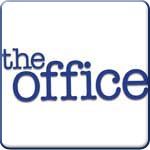 Who knew that a British TV show would turn into a hit in North America, followed by a computer game? The Office certainly isn’t the first British import, but the American version is so successful that the number of episodes has long passed its predecessor. The Office game exceeds expectations with its brilliant depiction of the quirky characters and their relationships.

The Office resembles the time management game Miss Management in that the characters run around taking care of tasks in an office environment. However, where Miss Management required carefully monitoring employee stress levels, The Office focuses on beating opponents.

Those who don’t watch The Office can still enjoy the game. That said, while the game doesn’t require you to know the characters or inside jokes, it’ll be a lot funnier for those who do.

The premise of the game is that Michael (aka the world’s worst boss) comes up with another hare-brained idea to hold an efficiency competition. Players channel Jim as they race against weird Dwight, pretty boy Ryan, Machiavellian Andy, uptight Angela and eventually Michael himself. The race consists of players grabbing folders from the filing cabinet, picking up print outs from the printer, passing out colored folders, and gathering completed tasks for filing.

While running around like maniacs, the prank meter fills up so Pam and Jim can pull their infamous pranks on opponents. Some of these pranks are direct references to the TV show; for example, on one occasion Jim put Dwight’s office supplies in the vending machine. Pranks offer the benefit of slowing down the opponent. Unfortunately, some of the pranks contain dialogue so those without sound may miss the joke.

The race completely engrosses players to the extent that it’s hard to pay attention to every prank. However, each round contains only a couple of pranks, and they repeat.

When Jim beats an opponent or accomplishes a feat, he receives awards. Of course, there’s no money involved. Instead, Jim can win Michael’s World’s Best Boss mug, Dwight’s bobble-head, a Jell-O-covered stapler, and more. Extra points are awarded for trophy creativity.

Before starting the next level, Jim has the opportunity to choose co-worker power-ups. Each employee comes with a special power up such as extra points for a task, making the prank-o-meter load faster, extending the life of the coffee supercharger, and so on. Jim has to work to earn an employee before he can gain access to the employee’s power up. Also, he can only choose a limited number of power-ups per level, ranging from one to five. Choose wisely or else it can break the race.

What’s an office without a coffee maker? Jim can fill up on coffee to speed up his pace. This makes a big difference, especially in later stages where Jim has to complete around 100 tasks in a single level. It also helps him beat his opponents to completing tasks. The vending machine, besides being part of pranks, also acts as a bribe. By tapping it, Jim can take credit for the opponent’s completed task.

Occasionally, Jan interrupts the race as Michael wants to suck up to her the minute she enters. The "Let’s please Jan" mini-games have Jim racing around picking up supplies she wants or collecting employee suggestions for the suggestion box. (We bet those suggestions contain a few smart aleck statements.) Too bad the game doesn’t share them, as it would take the humor to another level.

The graphics are a quirky cross between photos and 3D images, which blurs the characters. Some backgrounds resemble low-resolution graphics. The game might fare better had it taken a more "comic"-style art approach. Nonetheless, it doesn’t interfere with gameplay.

While playing the game a second time won’t reveal new surprises – unless Jim didn’t win all of the available awards – players will want to play again as there are three difficulty levels. Once players complete the hard level, they can try to earn an expert score for every level. There are five rounds, each with eight levels for a total of 40 levels.

The game starts slow especially at earlier levels, but it picks up as soon as Jim receives "employee helpers" and other power-ups. It doesn’t take long before The Office reins in players like any dash-style game. For fans of the show, here’s your chance to sock it to Michael, Dwight, and other annoying characters. Casual gamers – especially those who enjoy time management games – will find this an amusing addition to their collection with its unique contributions to the genre.