Home / Reviews / The Night of the Rabbit Review

The Night of the Rabbit Review 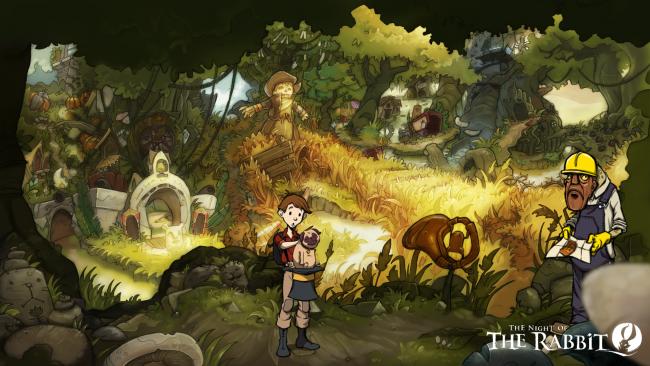 Tricks are for kids and their rabbit mentors.

Jeremiah Hazelnut is a typical twelve-year-old boy: he loves comic books, blackberry pie, and going on adventures in the woods near his home.  Jerry dreams of becoming a master magician some day, and while he is old enough to question the world around him, he’s youthful enough to believe in the existence of real magic.  On his second to last day of summer vacation, a day when “anything is possible,” Jerry’s dream begins to come true.

A mysterious message arrives in the Hazelnut mailbox, containing a poem that leads Jerry to meet the Marquis de Hoto: an anthropomorphic rabbit who claims to be a Treewalker magician in search of an apprentice.  The Marquis takes Jerry through a portal in the woods to the town of Mousewood, a fairytale hamlet where Jerry is the same size as its mouse, squirrel, and other forest creature inhabitants.  His magical training begins immediately and will take place predominantly in Mousewood and its nearby surroundings.

As is standard in most classically-inspired point-and-click adventures, Jerry’s journey consists of exploring Mousewood, interacting with its citizens, collecting items, and using what he’s learned and acquired to solve puzzles.  Daedalic’s adventures in particular are fond of combining inventory items to create new uses for objects, and The Night of the Rabbit utilizes this fully to enhance the difficulty and creativity of its challenges.

Three additional features that expand your repertoire of puzzle-solving possibilities are Jerry’s magical spells, book, and coin.  As Jerry progresses in his training, he’ll learn magic spells that must be used to solve certain puzzles and access new areas.  These different areas will also change depending on whether it’s day or night, which can be controlled via a book received at a certain point in the story.  The creatures of Mousewood have different habits at night, and many puzzles require Jerry to explore both times of day to reach a solution.  In addition to these, Jerry’s magical coin with a hole in it allows him to see hidden secrets when he uses it as a monocle.  These secrets sometimes involve locating invisible persons, but its main use is to allow Jerry to see all the interactive hotspots that may be of interest within a scene.

This latter feature acts as a hint system for The Night of the Rabbit, which usually helps prevent unnecessary pixel-hunting or clicking on random objects with the hope that they are interactive.  Highlighted hotspots may not be of real use—like a view of the city that Jerry merely comments on—but they help narrow the focal points in the gorgeously detailed scenery.  The magical coin hotspots are also infinitely more useful than the “Advice Seeker” spell that the Marquis grants you early on—”In case you need help”—and which contains little more than vague instruction related to your main objective, which can be found in greater detail in the journal log at any time. 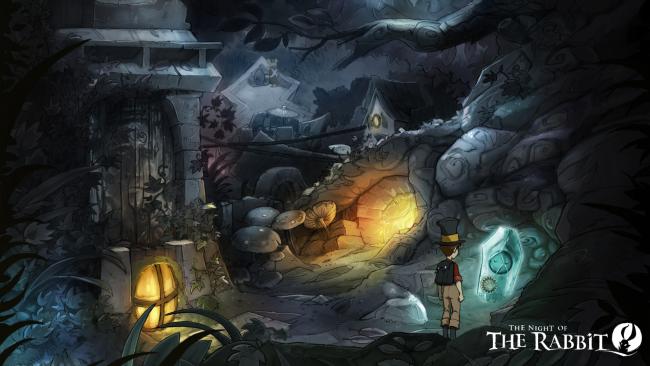 Unfortunately, even with three different methods of guidance available (or really two, since the Marquis is so blatantly useless), The Night of the Rabbit still falls victim to the dangerous point-and-click trap of having obscure goals and order of completion.  The first half of the game especially suffers from an excess of objectives that must be completed in a specific, undefined order—many objectives or their related items may be acquired early on but are not able to be completed until much later.  You are often left trying to work your way backwards to figure out what your current goal actually is, but can never be certain of the steps because of standard adventure game logic.  Just because you need a pan to help finish Mr. Hare’s birthday cake doesn’t mean it’s the one pan that’s been visible for the entire game—and, in fact, it’s not.

These challenges are exacerbated further by the extremely small clickable area on some objects and hotspots.  With such densely packed scenes, many items are laid right next to or on top of one another, with the hotspot for one crowding out the other.  This results in not only hard-to-click on objects, but objects that are very easy to overlook completely if you don’t find their two-pixel-wide clickable area.  In one scene, I saw what appeared to be the exact object I needed to complete a goal.  I placed my mouse on, near, and around the object, clicking each time—every click returned a response for a nearby stairway.  I concluded that I must be wrong; just like the pan puzzle I must need a different item, which resulted in a wild goose chase for something that could be used in place of the non-interactive object.  In actuality, the object merely had a tiny, almost indistinguishable area that needed to be clicked on in order to be activated.  Luckily, the second half of the game has a more directed focus with many self-contained scenes, so even moments of pixel-hunting don’t detract from the endgame experience too much. 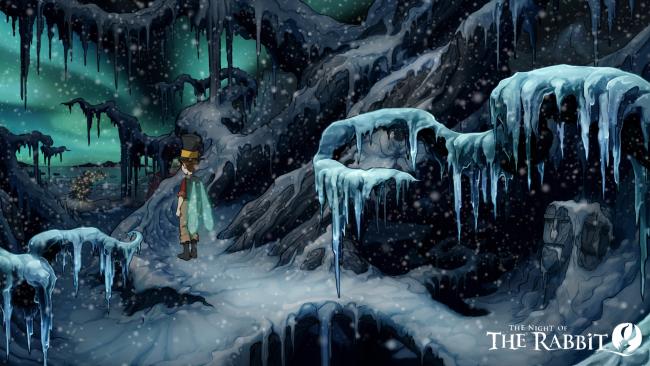 When The Night of the Rabbit‘s objects and puzzles work correctly, they are extremely rewarding and typically require a balanced amount of fairytale logic and real world cleverness.  Whether you’re finding a sweet treat for a spoiled young mouse or outwitting a crafty leprechaun kleptomaniac, both the puzzles and characters of Mousewood are charming and engaging—up to a point.  There is a disappointing amount of repetition from some characters that becomes exasperating when combined with unskippable movements in between their dialogue.  My favorite character, the Churchmouse who is desperate to train his dimwitted son to take over the family business, ends every conversation with the same comments and concerned, extended glances at his son.  The first time was humorous, the second made me sad for Mr. Churchmouse, and the third and beyond made me sad for anyone sitting through his unskippable actions more than twice.

Although these distractions cause a temporary removal from immersion in Jerry’s story, The Night of the Rabbit is still a beautifully polished, expansive adventure.  It gleams with a childlike innocence on the surface that gives way to a darker final act, retaining its magical atmosphere throughout.  It is filled with bonus challenges, unexpected video game references—see if you can catch the nod to Grim Fandango—and clever bits of dialogue one can’t help but smile at, like the café’s “wood-famous coffee.”  While I needed a break from Mousewood upon encountering a frustrating puzzle or unclickable object, I always wanted to return.  Even outside of summer vacation, it truly seems like anything is possible there.