Home / Reviews / The Mystery of the Mary Celeste Review

The Mystery of the Mary Celeste Review 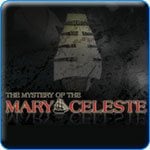 Mary Morehouse has a fear of boats, which makes sense as she’s the ancestor of the person who found the Mary Celeste, a ship found abandoned in the Atlantic Ocean, undamaged, but with its entire crew missing. As soon as the Mary Celeste II leaves dock on its maiden voyage, strange things start occurring, which only feeds into Mary’s fear and desire to get off the ill-fated ship. While the mystery grips, the gameplay and ending of Merscom’s latest hidden object game The Mystery of the Mary Celeste don’t round out the story as much as they could have.

Despite feeling frightened, Mary pieces together the puzzle behind the disappearance of the original Mary Celeste while trying to avoiding an untimely death. The story holds a lot of promise, and the mystery absorbs you, but it never becomes completely clear, and the ending leans towards more confusing than satisfying. With two ships involved — the original and the Mary Celeste II — the story blurs.

The Mystery of the Mary Celeste begins on the dock as the captain greets Mary. The hidden object part of the game comes in the form of finding the objects that match pictures. Every now and then, Mary needs to do a task such as fix the electrical wiring or clear out a flood. She does these through mini-games and using items from her inventory with an item on the scene. The mini-games have a purpose that provides a satisfying break from the item hunting part of the game.

Don’t worry about clicking too many times. The game never penalizes you or tells you to cut it out. You just click to your heart’s desire and when you get tired of it, ask the compass to highlight the area of a hidden item for a hint. The compass will spin out of control to render itself useless until the spinner stops and then you can ask for another hint.

With a pictured list of objects to find, you can involve younger kids who aren’t yet reading or just beginning to read. In spite of the slightly spooky theme, The Mystery of the Mary Celeste didn’t scare the family six-year-old who delighted in helping review the game. The sounds add an air of eeriness, making them a fit for the story and crisp scenes, but you can lower the level of creepiness by muting the sounds, too.

Some scenes require looking closer inside a bag, a drawer or some container to find some of the hidden items. The mouse pointer highlights the item when it passes over such a spot. After you find everything, it takes a moment before you return to the scene to find the rest of the items. This delay makes you wonder if you’ve found everything or not. These delays happen too often, especially when switching between scenes.

The barely noticeable dialogue sits at top of the screen. The scene won’t move on until you’ve clicked through the dialogue, which helps when you forget it’s there. When you need to figure out what items you need from your inventory to use on the scene, it often turns into a guessing game as you can’t make out many of the items.

The story requires some thinking and conclusion-drawing on your part. While readers of mysteries like and appreciate not being spoon-fed details, this doesn’t go over well in games where players want to focus more on the play and less on figuring out the story.

Mary revisits every scene many times and picks up the same objects turning the play into a repetitious one by hidden object standards. Typically, players would consider the gameplay length just right. But in this case, it goes on too long as it feels like you’re moving as a snail’s pace to find out what happens. With one mode and the same items appearing in the same spots, there’s little reason to replay the game.

The Mystery of the Mary Celeste starts strong and finishes with a whimper. The game falls right in the middle of the pack: not the best and not the worst. Its annoyances don’t grate as much as some of the problems found in other games. Besides, it’s a game for the whole family can play together. The game lives up to its tagline of "ghostly mystery at sea." If you don’t mind drawing your own conclusions, then you’ve probably figured out whether the game warrants a look-see or not.