Home / Reviews / The Mystery of the Crystal Portal Review

The Mystery of the Crystal Portal Review 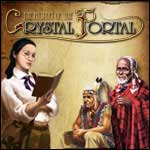 The latest seek-and-find adventure from RealArcade, The Mystery of the Crystal Portal, centers on journalist Nicole Rankvist as she receives a strange note from her archaeologist father, Robert, saying that he’s discovered an artifact that has the power to change humanity. When Robert goes missing, Nicole must find pieces of the Crystal Portal key and retrace Robert’s steps by – you guessed it – searching for hidden objects!

Nicole’s journey takes her to five exotic locations, including Japan, the Swiss Alps, the Mayan ruins of Guatemala, and wintry Russia. Each location is broken into two or three scenes where you must search for "normal" objects (the usual random assortment of items such as vase, bucket and saw), story items that will help you advance (like a jug of gasoline to power a generator), container items (more on these in a moment) and "puzzle" items like gears and tile fragments that unlock the final stage of each round, which is always a puzzle game of some sort.

The container items that represent The Mystery of the Crystal Portal‘s major gameplay twist. Once you find and click on one of these special items, it will open up to reveal a second set of items that you need to find, click on and drag into the container in order to complete it.

Certain containers, when completed, will move or disintegrate to reveal additional objects underneath. Some objects have to be found and used in other scenes, such as finding a can of gasoline to power a generator to light up a darkened cave for you to explore.

The containers are a neat idea, except that you have no idea what the containers look like beforehand because, unlike most hidden object games, you aren’t shown a silhouette or picture of what you’re looking for – it’s only after you’ve found and clicked on the container that little images appear of the objects you’re supposed to find and put inside.

In other words, finding each container involves clicking around randomly until your mouse cursor changes shape to indicate that the object can be clicked on – and then you know that you’ve found a container. Strangely, a little icon of the container shows up only after you’ve found it, and not before.

There’s also the feeling that the story and the sequence of events you’re meant to follow in the game isn’t quite air-tight. For example, when I picked up the last stone in a series of stones to find, Nicole exclaimed that the "last piece of stone was behind the fireplace!" when actually the last stone I picked up was on a shelf. On another occasion, I was told to find matches in one scene so that I could light a fire in another scene to get a better look at a crest at the back of the fireplace. But when I found the matches and returned to the room, the fire was burning but I clicked on the crest and nothing happened. I had to find all the items in a lamp container before the fireplace crest became clickable. (Ok…)

These foibles are easier to overlook owing to the fact that there are no time limits or penalties for random clicking, and unlimited hints as long as you’re prepared to wait for the hint bar to refill (although sometimes hints reveal items that go into containers you haven’t found yet, which isn’t very helpful).

The game has good graphics in its favor, including beautiful scrolling panoramas that introduce each new location. It’ s evident that a lot of care was taken to place items in the scenes that look like they belong there instead of completely random stock photo clutter (in other words, you won’t see a Statue of Liberty or Eiffel Tower amongst the Mayan ruin, thankfully.

The verdict: The Mystery of the Crystal Portal is a good, though not stellar, hidden object game whose laid back set of rules is sure to provide a relaxing experience free of the stress of time limits and penalties for random clicking or using up hints.