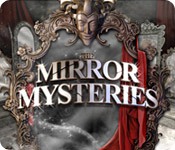 I know you’re supposed to be siding with the mom, and not the creepy talking mirror in hidden object game The Mirror Mysteries, because he’s trapped her children behind his glass. But he did it after they broke several other mirrors, so you can kind of see why he’s peeved, and his offer to return the children if the broken mirrors are restored seems more than fair. Ok, he does make a few threats here and there, but hey, who hasn’t?

You must visit several different enchanted lands in The Mirror Mysteries to retrieve the shards required to repair all of the broken mirrors, but don’t expect to just pick them up. You’ll first have to do a series of favors for that particular realm’s inhabitant, such as finding a way for the king to apologize to his queen, repairing a clock for a mouse, or a helping a faun get ready for a dinner party. The fanciful settings feel like they were pulled straight from C.S. Lewis’ Narnia books, and are as whimsical as they are familiar.

Each land includes a series of rooms that you must shuttle between to find everything you’ll need to complete the task put to you by that land’s inhabitant. Instead of a list, you’re presented with groups of pictures at the bottom of your screen. Each group of items will fit together to make a collective whole that you’ll have to fit back into the picture. You might find several apples, then place them in a bowl, or track down the pieces of a watering can to use in the garden. It’s not always immediately obvious which items go where, though – you may have a bunch of paintbrushes, but not realize that they’re supposed to go in that cup on the shelf. Fortunately, moving your cursor over a hotspot will trigger an outline of what’s eventually supposed to go there. Some areas will also sparkle to let you know they need completion, but it’s usually easier to just mouse around yourself.

Not all items need to be returned to the scene in which they were found, though. Some need to be moved to other rooms in the realms; returning them will typically unlock new areas or items that can’t be accessed otherwise. Though at first having to shuttle between rooms to finish your search is a bit disorienting, but a handy counter beneath the icon for each room lets you know how many items still need to be found within it. The object searches may be a bit more complicated that simply rolling in and finding everything at once, but the game makes sure you always know exactly where you need to be and what you need to do. It’s nearly impossible to get stuck.

The objects look exactly the way they do in the actual scene, which is helpful, but it can still be tricky to tell one plank of wood from another. The beautifully-detailed artwork makes examining each location a joy, but recharageable hints are available for when you can’t quite put your finger (or your cursor) on that last tiny screw or nail.

There isn’t much story to speak of – mirror kidnaps kids, mom wants them back, mild threats get passed back and forth, that’s about it – and what little voice acting there is comes straight from Overacting 101 class. The writing itself isn’t bad, in fact I rather enjoyed the mirror’s grudging admissions of respect as the mom managed to overcome obstacle after obstacle, it’s just a shame the acting isn’t up to par.

Disappointing though the voice acting may be, it’s not Mirror Mysteries‘ biggest failing, its length is. You can storm through the entire game in under three hours without breaking a sweat. It’s a shame that it’s over so quickly, as its inventive style is a refreshing change of pace from the usual hunts. If you don’t mind the briefness of the encounter, though, this is a particularly enjoyable HOG.