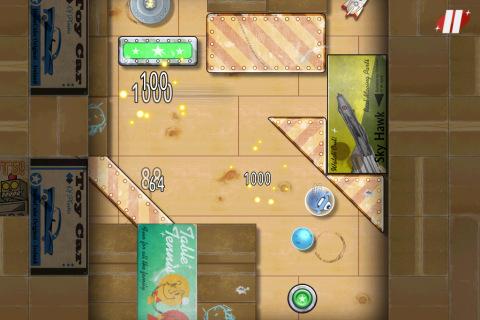 The Marbians don’t want to see your leader. They just want you to help them home.

For decades, we’ve looked to the skies over Roswell, New Mexico, expecting the worst to come plummeting down from the Terrifying Void Of Beyond. Finally that day has come, and first contact has been made by The Marbians, a group of aliens who aren’t nearly as scary as 1950s Hollywood would have us expect. Oh, and all they want to do is get back home – and it’s up to you to help them.

The Marbians is a new physics puzzle game for the iPhone that stars a bunch of goofy little aliens who crash land in a 1950s-esque Roswell. The Marbians all appear as little blue creatures who sit inside glass spheres, much like hamsters who are stuck inside exercise balls. In order to get home, they need to collect moon rocks and return to their UFOs. That’s where you come in.

The game is incredibly easy to play: each level is a two-dimensional map that’s shown from a top-down perspective. Scattered across these maps are a number of moon rocks and a UFO they need to finish their journey at. In order to send the Marbians zipping around the screen, players have to touch the little guy on their iPhone’s screen, drag their finger back to determine the power of the shot, and let go.

Players only get one shot (literally) to bounce a Marbian around the map, (hopefully) helping them collect the stones they need and safely arriving at their UFO. However, this is easier said than done. After the obligatory tutorial levels, things start getting complicated pretty quickly. Maps with lots of corners to get around start appearing. Then there are the levels with moving parts (which sometimes shift on their own and sometimes require a switch to be hit before movement begins). Then there are the ones with magnets, and the ones with teleporters, and then… well, you get the idea. There are 72 levels in all, and lots of devious little challenges that keep on getting added in.

As The Marbians progresses, the difficulty continues to increase so that things stay challenging. It’s actually not all that difficult to at least get through most of the levels, but getting through and collecting all the moon rocks (which nets the maximum ranking) is fiendishly hard at times.

Basically, this is a solid little physics puzzler, but what helps it stand out is its production values. The graphics are goofy and lovely all at once. The Marbians themselves are certainly cute, but the environments are what takes the cake. Many of the toy boxes that in the environment feature some delightful pulp sci-fi artwork. It’s adorable, and players should take a few minutes to appreciate all the creativity that went into these level designs. 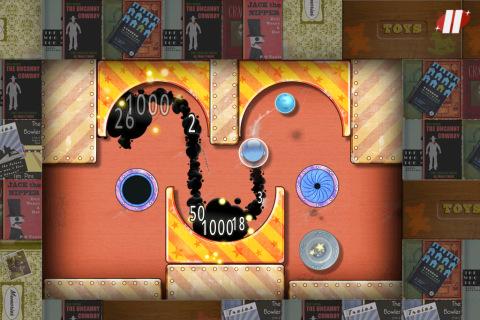 The audio, too, is lovely. While there’s no real voice-acting, the soundtrack features some wonderful 1950s-style music. While they always stay in the background, the tunes still add a lot to the overall gameplay experience and are a lot of fun to listen to.

It should be noted that the free version of the game is only a six-level demo. In order to play the rest of the game, players will have to fork over $0.99. That said, this is a small cost for a massive amount of content.

The Marbians is a wonderful little title for the iPhone. It’s full of charm and fun, and the puzzles is delightfully challenging. Not only that, but it’s incredibly easy to get into and then put down. Helping the strange little aliens on their journey home is a blast, and you should definitely give the game at least a cursory play-through.