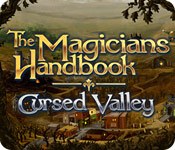 So many hidden object games are out now, you could make one concealing just the names of all of the hidden object games, and have a pretty beefy release. So how can a developer attract players already stuffed to the gills with such offerings? BC Soft Games hopes the hand-painted backgrounds and eerie atmosphere in The Magician’s Handbook: Cursed Valley will do the trick.

In addition to unoriginal gameplay, Cursed Valley risks being confused with other magic-themed hidden object games, including Abra Academy and Magic Academy. The story takes a different turn, however, sending you to the titular valley, rather than magic school, to remove a curse that has haunted the basin for many years. Wand in hand, you’ll visit numerous locations to look for the enchanted items you need to create spells that will take you closer to the source of the mystery.

Cursed Valley is split into 13 chapters, each sending you to two or more locations to search for the items you need for a spell. You’re given a limited amount of time to find a set number of objects and complete a mini-game that forms the actual enchantment from the items you’ve gathered. Each location (examples include a treasure room, a creepy farm and the front stairs of a church) consists of a single static screen, with the items for which you’re hunting scattered across the screen, sometimes in plain sight, more often in hard-to-spot places.

You’ll be glad to have the spells once Cursed Valley grows harder. One incantation, called Reveal, shows you the location of a single random object on the screen; another, dubbed Repel, removes all of the visual distractions from the current location, including spot animations, twinkling lights and books that take to the air.

As you progress, you’ll encounter other now common twists, including a dark dungeon that requires you to use a torch to see a small portion of the screen.

While the mini-games spare you the drudgery of piecing together a torn photograph (a custom of far too many hidden object offerings), they still don’t inspire much excitement. One challenge has you linking contiguous matching objects on a grid to fill a potion bottle, while another challenges you to find the letters that form the phrase for casting a spell. For the latter, groups of letters sporting different fonts, sizes and colors are displayed. I liked it the first time through, but upon its second appearance, I wished I had a spell to complete it automatically.

Casual gamers can either breeze through Cursed Valley, looking for concealed objects and slam-dunking the mini-games, or approach the adventure meticulously, finding objects quickly and locating all of the items in each chapter instead of the minimum number needed to create a spell. Doing so allows you to level up. Earn enough upgrades, and new wands and additional difficulty levels are unlocked when you beat the game.

The best thing about Cursed Valley is its hand-painted backgrounds. Although there are more photorealistic hidden object games available, the hand-painted approach of BC Soft has an old school charm and allows for a more intimate experience. When you look at the church front, for example, there’s something warm and snug about knowing a person took the time to draw and color in the odd clash of stone gargoyles and soft-lit stained glass windows.

Unfortunately, Cursed Valley wastes your good graces by hiding many of its objects too well. Some of the items for which you’ll hunt match the colors of the background too closely or are too small, while other hidden objects look more like a smudge than, say, a piece of cake or a ladybug. I developed a strategy of clicking all of the non-distinct items on the screen, and often found objects I never would have associated with the item for which I was searching.

There are other problems. One, the lack of item randomization allows you to memorize where things are and click on them quickly when you return to a setting. This diminishes some of the challenge of leveling up, since you can rip through a screen you’ve visited before and earn more upgrades. Also, the user interface is well-made except for the mouse cursor not changing when it’s over the lettering you click to move on to the mini-game.

While I enjoyed the hand-painted backgrounds, I found Cursed Valley lacking. None of the problems I mentioned are game killers, but little else therein inspires enthusiasm.