The Lost Treasures of Alexandria Review 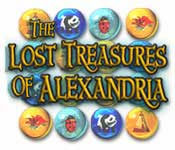 The Lost Treasures of Alexandria is a match-three game that puts you in the shoes of yet another archaeologist with big aspirations. While exploring in Africa, you discover one of ten spheres mentioned in an ancient Egyptian scroll. Your colleagues aren’t convinced, but you’re determined to uncover the rest of the spheres. From the Middle East to Asia and across the globe, you’ll visit mysterious ancient ruins in search of the ultimate goal, the "Lost Treasures of Alexandria."

There are three play modes to choose from, with “adventure” being the game’s story mode. Like all match-three games, the goal is to make matches of three or more tiles in a row or column. To avoid monotony, the method of moving tiles changes every few rounds. Sometimes, matches are made by switching two individual tiles, but other times you’ll need to rotate a block of four tiles at a time, which involves a bit of practice to master.

Tiles have varying point values, and you’ll sometimes be granted a number of free moves to rotate tiles as you please. In order to advance you’ll need to meet your target goals, including an overall score value and a number of specific matches. You’re strictly timed, which makes the game difficult to beat at higher levels.

On some levels, you’ll need to meet special challenges, like clearing the entire board. If you don’t plan your moves properly, you may find yourself stuck as the last few spheres fall in place apart from each other (assuming you don’t have any free moves left). These special boards are particularly tough to beat, and can prove frustrating after multiple replays.

Matches of three or more will freeze for a second before clearing. This allows you to quickly move other marbles in place so that you can create greater combos. However, it’s also rather frustrating, as it can prevent you from making other matches in that immediate vicinity, and can slow down the overall pacing of the game. This is especially true later in the game as the boards become more complex and the challenges are greater.

As for the other play modes, Arcade mode is much like adventure mode, except you compete against yourself for the best possible score. Make matches as quickly as possible before time runs out, and try to keep advancing to higher and higher levels. Once you’ve eventually lost, you’ll be shown your ranking.

Puzzle mode is a neat addition in itself, being an assortment of challenging logic puzzles. These puzzles often include rotating the board to rearrange tiles and makes matches. You may also be asked to figure out how to clear the board in a certain number of moves, or to rotate the board in order to navigate a sphere through a maze. You can replay as often as needed to win, so expect to press the reset button quite a lot.

The addition of these puzzles is something rarely done in the match-three genre, giving the game a new dimension. Not all of the puzzles are equally challenging or engaging, and some can be downright frustrating until solved, but most are well-constructed brain teasers that make an interesting add-on to the game.

There is a bit of inconsistency with the artwork. The backgrounds are generally beautifully done and detailed. In comparison, the game tiles aren’t always as polished, and can appear slightly blurry. They’re also a bit small, though you can still differentiate between them.

Given the stiff competition in the genre, with games like Bejeweled and Cradle of Rome setting a very high standard, The Lost Treasures of Alexandria struggles to stand out. The addition of logical puzzles make it more original, but not enough to make it exceptionally memorable. It’s a good one to check out if you’re a fan of the match-three or brainteaser genres, but might not have a broad appeal outside of the usual fanbase.