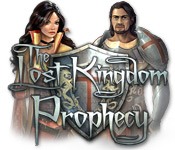 Most of the descriptions of The Lost Kingdom Prophecy peg it as being a hidden object game, but that’s only partially true. For the most part it’s a match-three game. And while it features a few interesting features, it’s about as exciting as you’d expect from a title that combines the two most ubiquitous genres in casual gaming and is set in a generic fantasy world.

The game is set in the Kingdom of Rosefall, where the combination of an evil wizard named Balaak and an ancient prophecy are threatening to to destroy the kingdom for good. The god-like Elementals have abandoned Rosefall and it’s up to Princess Serena to bring them back and save the day. Or something like that. The story’s pretty vague and poorly written and features all of the staples of a by-the-numbers sword and sorcery fantasy epic. It’s hard to care much about what happens, and none of the characters are given enough depth for you to get attached to them.

What the story does do, though, is provide a reason for you to find lots and lots of objects, which somehow will make the Elementals return. The game is divided into several chapters, each of which is bookended by a HOG stage. These stages have you finding pieces of objects and then figuring out where to put them once you’ve completed them. Some objects can only be found once you’ve placed another one, but for the most part these scenes are pretty easy. The objects aren’t hard to find and the hint system recharges in the blink of an eye.

The HOG scenes are also pretty rare. Most of your time will be spent in match-three mode. These sections are very similar to the Fishdom games, as each grid features a number of colored tiles and the goal is to clear them away by matching objects on top of them. Once all that’s done you’ll then have to clear one additional single line of tiles in order to bring a piece of one of the coveted items to the bottom of the screen. There are also the usual obstacles, like tiles that need to be cleared multiple times and chains that need to be broken, and you’ll also have access to a variety of spells. From bombs that blow away obstacles and a flying phoenix that douses the screen with fire, the spells available are all very useful, though with only four, a little more variety would be nice.

And that’s the main issue with the game: the lack of variety. Even with two distinctly different game modes — HOG and match-three — it feels like you’re just doing the same thing over and over again. All of the spells are learned in the first few stages, and it doesn’t take long before you’ve come across all of the different obstacles. It would’ve been nice if there were a few more gameplay twists, and if they were introduced a little more gradually.

The one saving grace is the high level of customization Lost Kingdom offers you. You can completely adjust the match-three game, which allows you to both keep switching things up for variety or find the mode that works best for you and stick with it. You can pick the grid type (rectangle or hexagon) and choose from four different styles of matching. They range from traditional Bejeweled-style gem swapping to selecting tiles simply by dragging your mouse across groups of three or more. Some are more challenging than others, but no matter which way you play the game is pretty generous with the way it drops new tiles. It doesn’t take too much effort to pull off massive, screen-clearing combos.

But as great as the match-three customization is, it would’ve been much better if it were a part of a more interesting game. There’s far too little variety in the gameplay, not enough HOG scenes, and the story and setting are generic at the best of times, and downright boring at the worst. There may be close to 200 stages in the game, but chances are you’ll be tired of the game long before then.