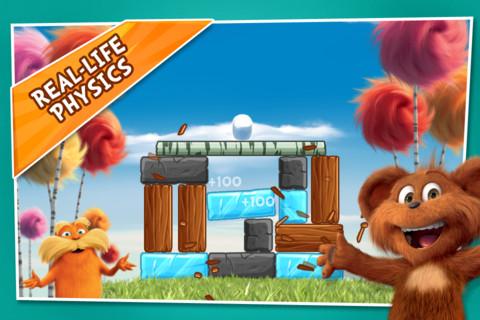 The Lorax is good for a distraction, but little else

Console games that are tied into movies generally fail for any number of reasons, the most notable of which is a very short development cycle. With the advent of mobile gaming, games based off movies finally have a medium where the short development cycle isn’t necessarily as big of a hindrance. Unfortunately for The Lorax, a game by Miniclip.com that ties in with the Dr. Seuss movie that was recently in theaters, you’re still getting the stunted, boring experience that you’ve come to expect from movie games.

The concept behind The Lorax is stunningly simple: you have to guide a marshmallow down to the ground safely. You do this by tapping the screen and eliminating different pieces of a tower, being careful not to send the marshmallow careening off the side of a hill, or into objects that keep it from hitting the ground.

The physics of the game work fairly well and consistently, but the rub against the game for more hardcore audience is that it is perhaps a bit too easy. You’ll fail a couple of times when you goof on timing, but generally you will breeze through the levels fairly quickly. 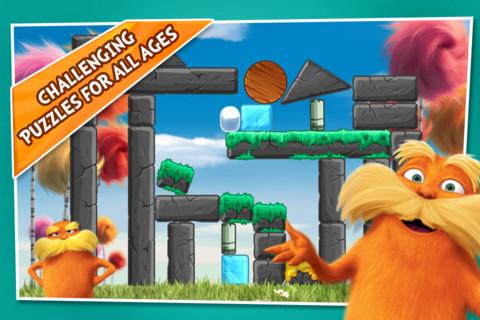 The levels are very pick-up-and-play friendly. A successful run will take all of five to ten seconds, and there are only 48 levels in total on offer in the game. Once you beat the levels, the only thing left to do in the game is collect higher scores for three marshmallow ratings and comparing scores on leaderboards—there are no rewards that the marshmallows confer outside of the satisfaction of doing them. Every seven or eight levels, however, you’ll get a small little clip of The Lorax, which kids should appreciate. Thankfully, the application is free, so you’re not out anything aside your time playing the title—about right for something that is simply promotional material.

If you’re looking for a new game to play as an adult—pass on this. It’s a little too easy and a little too shallow to really be worth your time. But if you and your family are about to head to the theater and watch the movie, having your children play the game during the car ride certainly will occupy their time on the road on the way there and back.