The LEGO Movie Video Game Review: Everything Is Awesome 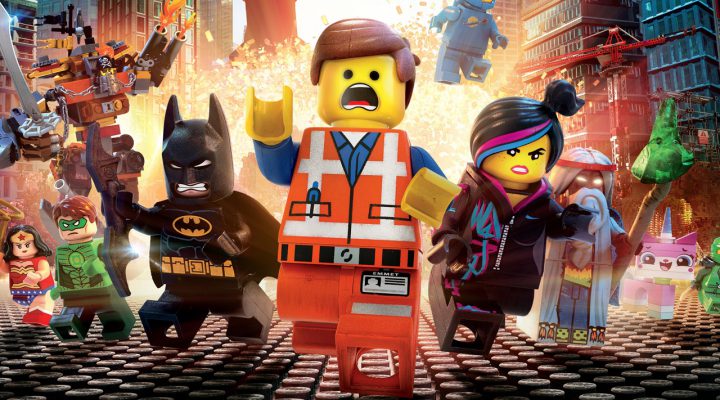 A little less than a year ago, I sat down in theaters not knowing what to expect as The LEGO Movie started. Ten minutes in, I was sold. The movie ended up being one of my favorites of 2014 and I actively recommend it to friends who are looking for something to watch with their kids, or are just looking for a goofy movie to enjoy during some downtime. So when I wrote about how The LEGO Move Video Game was making its way onto iOS devices, I was hopeful that the game would deliver the same sort of lighthearted, fun experience the movie did.

My first impression of The LEGO Movie Video Game was rather unflattering. The default movement control scheme had me dragging my finger across the screen to guide Vitruvius around, and tapping enemies to get Vitruvius to smack them with his staff. While the control scheme did work, it presented one major flaw: I couldn’t see anything since my hand was always in the way. I clumsily made my way through the first level, and finally decided to check if there were alternate control schemes. 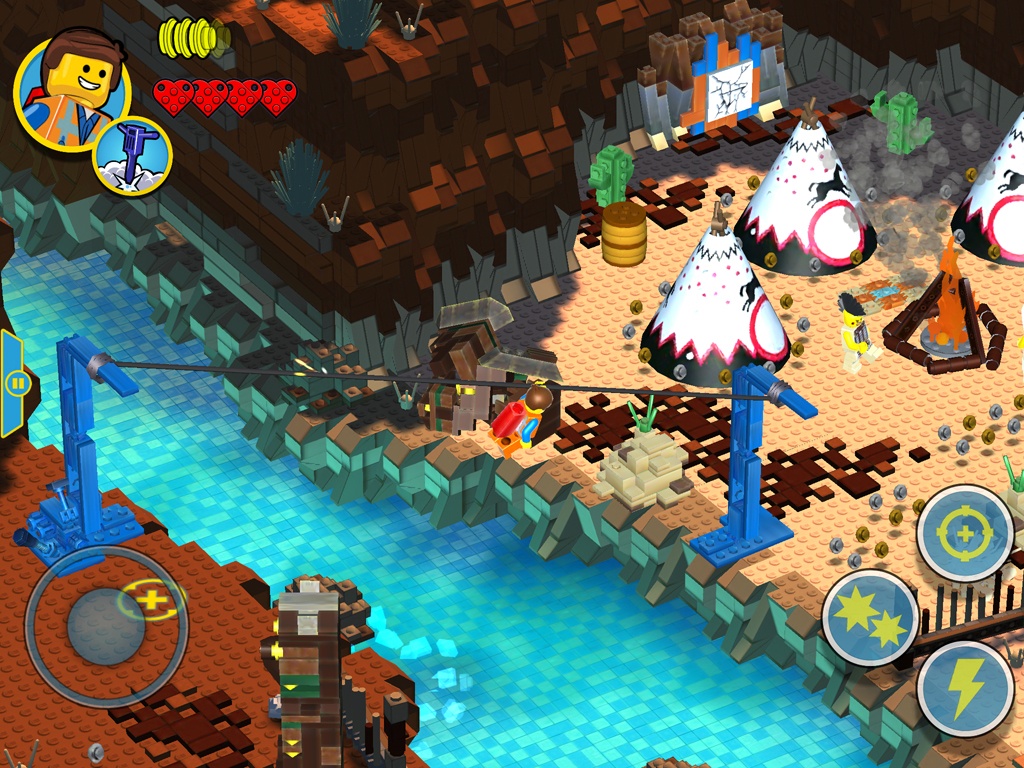 Luckily there were, and I switched it to the “traditional” control scheme (a thumbstick in the bottom left, and action buttons in the bottom right) and instantly the gameplay experience improved. Why Warner Bros. decided to make that funky control scheme the default is beyond me, but a quick trip to the options menu will relieve players of that odd design decision.

The gameplay is what I expected from a LEGO game. Primarily a platformer with light puzzle elements, players will occasionally have to jump into a vehicle where the gameplay transitions to the sort seen in endless runners, with players tapping the left and right side of the screen to direct their constantly-moving vehicle around obstacles. 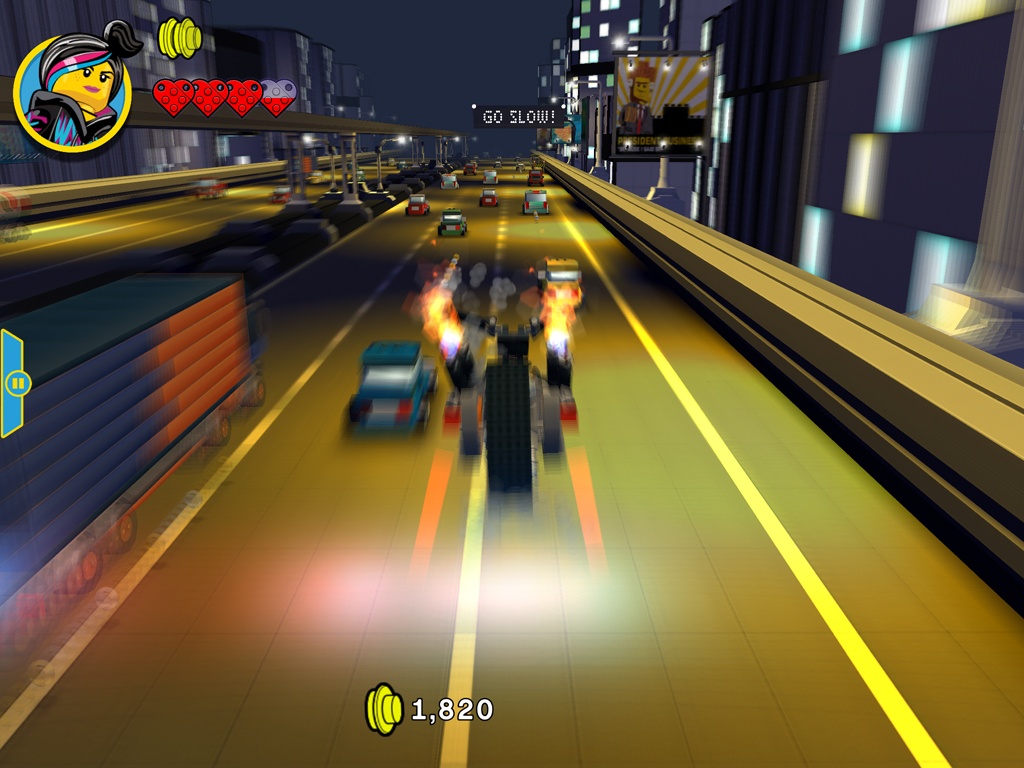 Following the pace of the film, the levels take place throughout the environments seen within the movie. Each environment includes enemies and puzzles unique to that portion of the movie. For example, as Emmet escapes from President Business’ headquarters, LEGO cops morph in to try and stop him, and one of the puzzles involves Wyldstar having to time a jump up a wall in order to get to a platform to trigger a laser beam that is needed to melt the reinforced door. Each level is well designed and plenty fun to explore.

Which is a great thing considering collectables are stashed in pretty much every corner, so exploration is key if you’re looking for 100% completion.

You’ll find the most collectables by simply running around the level and punching everything to pieces. Breaking things is always a fun staple of any LEGO game, and it’s no different this time around. As the objects break apart you’ll want to pick up the little pieces that scatter about. These pieces are used as currency to unlock the extra characters (it’s worth pointing out this is the first LEGO game with cross-franchise characters like Green Lantern and Gandalf, for example). With these extra characters players can go back into earlier levels and complete puzzles that required certain abilities from specific characters. Anyone who has played a LEGO game in the past five years will feel right at home.

That might actually disappoint some; The LEGO Movie Video Game doesn’t really try anything new. Sure you can pay extra money to unlock characters faster with IAPs, but I doubt most players will consider that an innovation. At its core, The LEGO Movie Video Game is the same formula seen in LEGO Lord of the Rings, LEGO Harry Potter, and so on. It is a solid, and fun, formula, don’t get me wrong, but the same formula nonetheless. 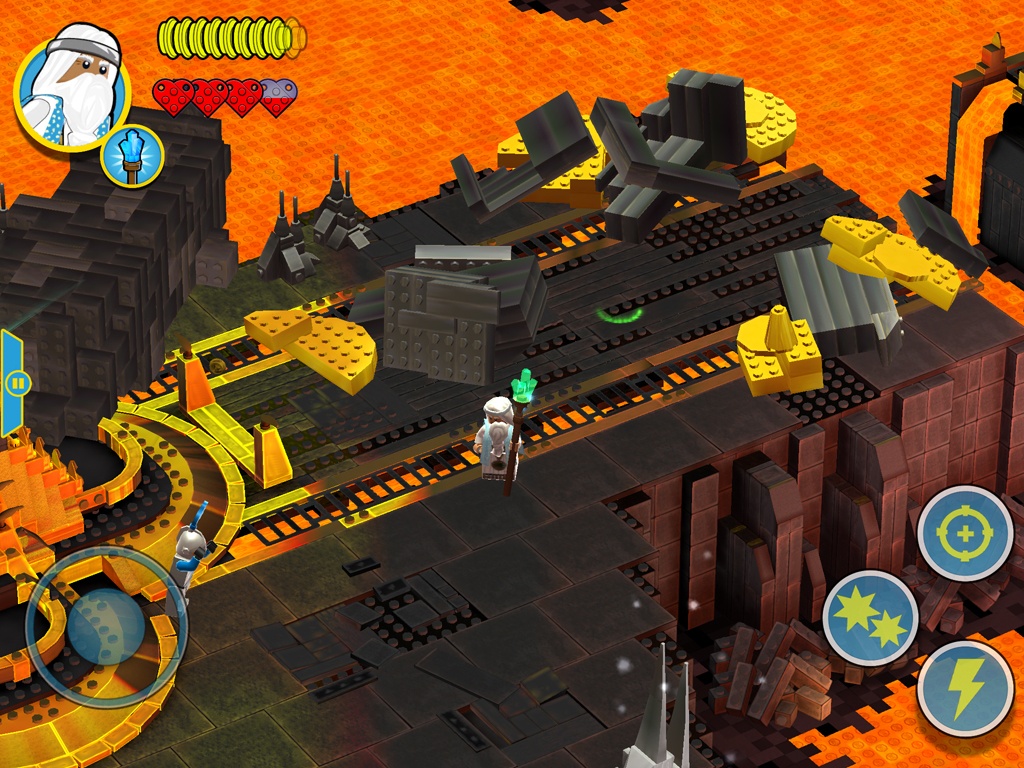 Jam-packed with levels of content to explore, The LEGO Movie Video Game delivers a faithful experience for fans of both the movie and previous LEGO games. Apart from the control scheme snafu at the start, I found nothing else that I disliked about my time with the game. Everything is, in fact, awesome.