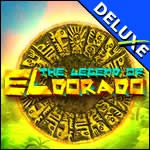 With a map originated from the Conquistadores, you must help Dr. Van Hutton locate a lost treasure buried somewhere in a lush South American rainforest. This is your goal in The Legend of El Dorado, a new puzzle game from Zylom.

While not as original as other 3-in-a-row games, The Legend of El Dorado is an enjoyable and relaxing digital diversion to help waste away a lazy Sunday afternoon.

Similar to those wildly popular gem-swapping games, players are presented with a board of multicolored “sundiscs.” You must click on at least two adjoining same-colored sundiscs (vertically or horizontally), which causes them to disappear, and break the gold plates behind it. New sundiscs then cascade down onto the board to fill up the empty spaces. In order to clear the level, you must break all of the gold plates – and do so before the timer runs out!

Each level has a slightly different shape. Some can get quote tough, such as level 2-10 that has individual pillars in the middle of the screen that make it very difficult to align two or more sundiscs. This is where you need to rely on power-ups to help you out.

Oh, yes, power-ups. Every few levels or so, players will see bonus tile pieces, such as a blue gem that will add extra points to your score if you can make the gem drop to the bottom of the board before the timer runs out; this is achieved by matching (and thus destroying) sundiscs below it. Another power-up is an hourglass that adds a few seconds to the clock. A shining sun gives you an extra life, while a bomb explodes all the sundiscs and gold plates in a vertical or horizontal row (or both).

Because the game challenges players to clear the board by clicking on two or more sundiscs instead of swapping three or more gems, it might take Bejeweled players a few minutes to wrap their head around the game mechanics of The Legend of El Dorado. The good news is that the game has a very short learning curve – anyone can learn the rules fairly quickly.

The not so good news is, well, there’s not much to the game. While new elements are introduced every few levels or so, such as power-ups and tougher board designs, not much changes even after a couple of hours of play. That, and there’s only one game mode, compared to most casual games that offer two, three or more.

The Legend of El Dorado is a good game but we almost wish there was more to it. The best bet is to try the game for free with the trail download to see if it’s the kind of adventure you want to go on.