The Legend of Crystal Valley Review 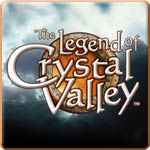 When Eve receives a note from her father asking her to come and visit his estate, she gets more than she bargained for when she discovers a portal that takes her to the fantasy realm of Crystal Valley. Not only that, but the inhabitants seem to know her father well! You’ll join Eve as she searches for her father – and a way home – in The Legend of Crystal Valley, a point-and-click adventure game from Cateia Games and Sandlot Games.

The Legend of Crystal Valley sticks to the tried-and-true adventure game format pretty closely. Players can move Eve around with the mouse, travel back and forth between different screens, and click on items to investigate them. Some items can be picked up and added to an inventory, where they’ll come in handy later on in solving puzzles. There are also a handful of magic spells that Eve can cast, such as "shrink," which add another dimension to the puzzle solving.

Cateia Games has added a twist that makes the game a bit more user-friendly: the mouse cursor actually changes color depending on the context of the action that you can perform. So when the cursor turns blue, for example, it means that clicking will take Eve to a new screen, while a green cursor means she can interact with an object or character.

The game’s voice-acting isn’t bad, and the visuals are impressive – especially the detailed cutscenes that help illustrate key dramatic moments. Some of the puzzles are quite ingenious, involving multiple steps and thinking back to scenes you’ve already been to. Unlike some other adventure games, I never felt that the solutions to any of the puzzles were unfairly obscure, but I’ll admit that I found myself yearning for a hint button on a couple of occasions.

Throughout the journey you’ll meet a lot of interesting characters, such as giant lizard-like creatures who drive buggies, giants, witches, and even a real live bookworm (if you can find him). The backstory is in-depth and interesting, but is a little hard to follow at times, perhaps owing to a bit of "lost in translation" feel.

While I’m on the subject, I did have a few other minor gripes with the game. Eve’s "diary" is literally a record of every single conversation she’s had with every single person in the game. It’s unwieldy, and makes it difficult to pull out key pieces of information. I would have preferred a simple "To-Do" list.

Also, the game seemed glitchy at times. During one particular puzzle I was supposed to give three items to a particular character; I gave him two at a time and was fine, but when I went back to give him the third, I found that he wouldn’t accept it. I had no choice but to restore from a previously saved game. Oh yes, you can save as many times as you want in The Legend of Crystal Valley, and I suggest doing so.

The ending I experienced was… a bit perplexing, to say the least, but I don’t want to spoil anything so I won’t go into too much detail. At least the journey itself was pretty fun.

The Legend of Crystal Valley is an ambitious undertaking that, in spite of having a slight "rough around the edges" feel, is an engrossing adventure with a thoughtful story and a respectable, though not quite epic, length.  Adventure game fans should at least try the demo to see what it’s all about.

If you liked this game, try Emerald City Confidential, Mortimer Beckett and the Time Paradox, and The Color of Murder: A Carol Reed Mystery.