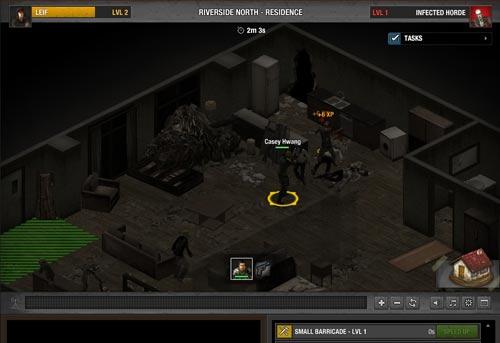 The best thing I can say about The Last Stand: Dead Zone is that I was playing it at the very moment of Diablo III‘s long-anticipated release and found myself reluctant to stop. That’s partly because there wasn’t much point to trying to log in to Diablo because of the server load, but also because ConArtist’s fourth entry in their Last Stand series surprised me at every turn. It succeeds as both as a strategy game and a roleplaying game, and it’s a gritty example of how to give aging social conventions new relevance. Perhaps most importantly, it’s a game for people who doubt the legitimacy of Facebook as a gaming platform.

Dead Zone might be just another zombie game at its core, but it manages to distinguish itself by recreating the conditions you’d have to contend with if you were stranded with a bunch of zombie clawing at the gates of your compound. Not only will you have to repel swarms of living dead, in other words, but you’ll also have to keep up your companions’ morale and ensure the necessities of survival. On one level, its calls for clearing trash, growing food, and building necessary equipment make it accessible to anyone familiar with FarmVille; on another, its insistence on sending you out into the shattered urban wastes for food, water, and other necessary supplies grant it a bite lacking in most sims.

Much of the game’s strategy centers on the survivors who periodically wander into your camp and offer to help out with your chores. In the past, games like this would simply send the follower off screen, and a message would pop up around five minutes later letting you know if they’d been successful. Here, you have to ensure the success of that job yourself. That means entering homes, convenience stores, and office buildings on a overhead map and ransacking them for supplies under a timer, all while fending off the unrelenting zombie horde either by targeting them your self or letting the moderately competent AI shoot them once they come in range. Since rummaging through boxes or cabinets can take several seconds, the tension seldom lets up.

This excitement carries over to your compound. Every now and then, you’ll have to fend off zombie waves of increasing difficulty with the help of the followers you’ve picked up along the way, which means you need to use the time in between to build up your fortifications and supply caches. The constant demands of the situation get rough–so much, in fact, that Dead Zone might chase off the most casual of players–but there’s enough here to sate players seeking a more potent experience without the commitments demanded by non-social titles of the same nature. It gets even more harrowing when you realize that you can attack other players’ compounds provided they’ve played for at least six day or haven’t already attacked someone else’s compound. At every turn, Dead Zone ensures that there’s something fun to do.

All of this is punctuated by a brilliantly grim presentation that presents a coherent (if familiar) timeline of the 350 days that led up to the tragedy, against the backdrop of a minimalist score that only adds to the tension. Dead Zone isn’t without a few flaws, but as they mainly center on a recent (and hopefully temporary) crop of connection issues and missing features (such as a chat interface) that will be implemented later, it’s hard to judge them against the stellar performance of the game as a whole. Indeed, in terms of pure enjoyment, Dead Zone is very much alive.