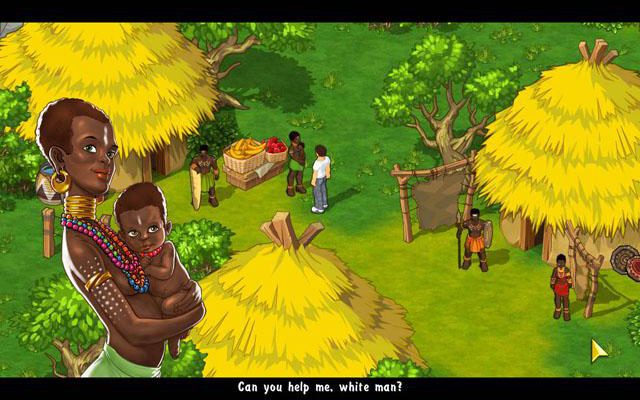 From “Lord of the Flies” to “Survivor” to “LOST,” it’s no secret people stranded on deserted islands make for a good story. But it’s a story that’s been used in surprisingly few video games. Enter: The Island Castaway—it’s an adventure/simulation casual game that puts you in a tribe of shipwreck victims. At first, they just want to survive, but they soon find themselves in the middle of a mystery that leads them to think they’re not alone on the island.

The game opens with an ocean liner that gets caught in a storm and is destroyed. You control Tom Allison, a strapping Jack Shephard lookalike, who awakens on an island, finding a small band of passengers from the wreck. Tom steps up as the de facto leader. That means it’s up to you to find food, fashion tools and care to the other survivors. Eventually, you’ll stumble upon a series of bizarre, indecipherable markings in the ground, launching a mystery for our heroes to solve. 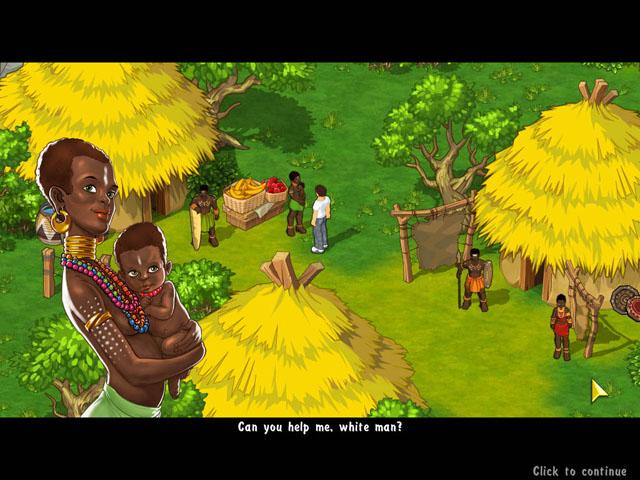 As Tom, you’ll usually be given tasks by the other characters, who might request you to catch fish, or gather lumber for a fire or to build things. There’s a veritable farmers’ market of fruits to be found, and when you receive tools like a fishing rod or crabbing net, seafood can be added to the mix. Additionally, there are several recipes to be unlocked that allow Tom to use these ingredients to cook all kinds of tropical cuisine—which is a good thing, because Tom has a health meter that constantly depletes at a gradual rate. When it hits the danger zone, Tom loses running ability; if it hits zero, he’ll black out, lose some of his items and must restart his adventure starting from the campsite.

For a game so heavy on item-collecting, it’s nice to see the trophy reward system in place. There are 15 trophies (really 45, since each comes in bronze, silver and gold) to unlock as certain conditions are met. For example, you’ll nab the bronze “Marathoner” trophy when Tom treks one kilometer in total, and the upgraded silver when the ol’ pedometer racks up five kilometers. You can even publish your accomplishments on Awem.com, which is a cool touch.

The developers really went the extra mile to maximize user-friendliness. With so many tasks being doled out, it can be hard to keep track of who wants want. Luckily, you’re given a Task List at the bottom of the screen, reminding you that Mike wants three twigs, for example. You also have a map at your disposal that shows the locations of all characters. If someone has a task for you, you can click on his or her icon on the map, and an “autopilot” mode will take over—Tom will automatically move toward that character. There’s also a handy autosave function. 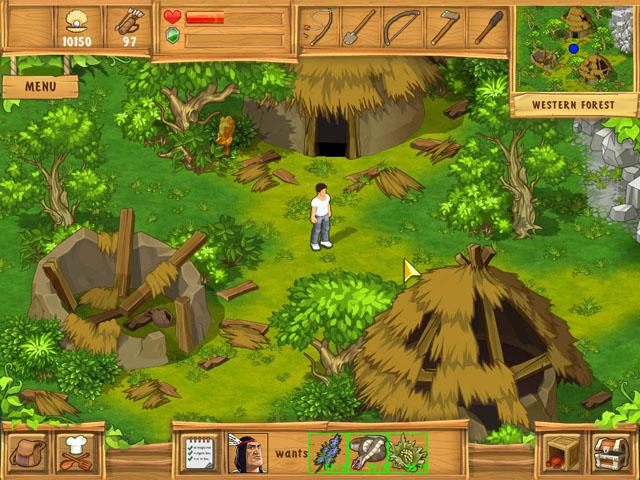 The Island Castaway does a good job blending elements of sprawling adventure titles with casual gameplay. That being said, things can begin to feel somewhat repetitive, as the game is essentially running errands for people. Granted, new elements are introduced to spice things up, like hunting wild boars and crop-growing, but gameplay quickly reverts to item delivery. I would’ve liked to see more emphasis on the simulation of survival—maybe a rationing system, or having to repair a damaged shelter after a monsoon.

And while the story does keep the game from feeling like “The Oregon Trail” on an island, I’d be remiss to ignore the distractingly subpar voice-overs. While many studios don’t have Nintendo-sized budgets to hire experienced voice actors, sometimes it’s better to not have voice acting at all, in my opinion. When discussing making fruit salads, Tom asks island-mate Nicole: “Do you think it would be tasty?” Replies Nicole: “And how!”

But the detailed graphics, long list of items and extra challenges makes the price tag worth it. It’s a polished product, and for one targeted at casual gamers, it offers lots in the way of questing and exploration. There are natives to befriend, ancient statues to collect, trees to fell, tools to acquire (and upgrade), bartering to do, caves and forests to venture into, watermelons to eat and mysteries to solve. You’ll spend hours playing The Island Castaway. The tribe has spoken.