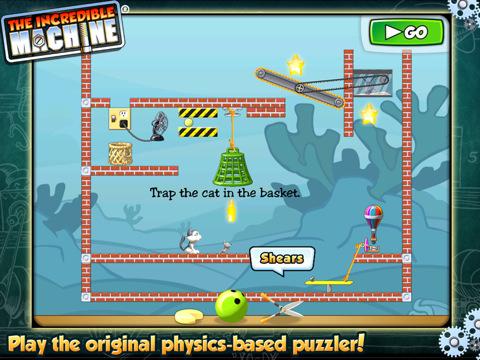 It was only a few weeks ago that we reviewed Casey’s Contraptions, a puzzle game where the point was to complete menial tasks using all manner or crazy props like balloons and books, pipes and scissors. It was glorious in all its Rube Goldberg goodness. Now, hot on its heels we have The Incredible Machine, which has a very similar setup. Not that that’s a bad thing, since they’re both very good games.

In The Incredible Machine you’ll be playing through 60 levels (and more available to purchase in packs) where you’ll use all sorts of tools and objects to accomplish something really simple. It’s how a ball, rope, balloon, funnel, etc can be used to drop a basket or put a bowling ball in a box. What it means for the player is that you can let your imagination run rampant to find solutions to each puzzle.

Sound like it’s a lot of trial and error? Well, it is. You’ll be making small adjustments to your items to get closer and closer the eventual solution. Luckily you never feel like the game is working against you. The objectives are made clear, and the physics governing the world are consistent and make total sense. This is key, since the last thing you want while trying to get all these pieces to work together onscreen is something that just doesn’t work like it should.

There were more than a few times over the course of the game where I was well on my way to my selected solution, moving around pipes and what-not to line up some long winded series of events only to make one or two small “mistakes” that led me to solving the puzzle in some entirely different way. Having these different ways to come to the correct conclusion in this type of game is essential. It’s no fun having all these gadgets and knowing there’s only one exact way you have to use them. 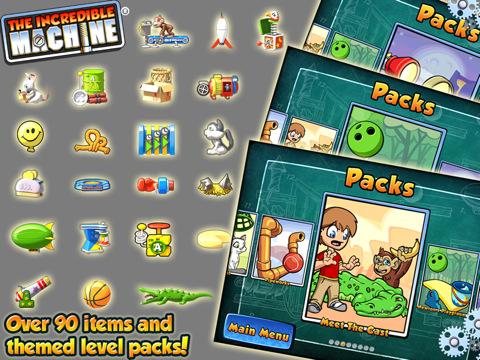 The Incredible Machine may sound a bit familar to those you in your late 20’s or later. That’s because there was a PC game back in the mid-90’s of the same name made by a guy named Jeff Tunnell. Through a manner of happenstance, all these years later he’s returned to bring the seminal series to the iPad. The touch screen, drag and drop gameplay is the perfect place to bring back this PC classic, and as someone that spent untold hours playing the original, I can attest that the spirit and fun of that earlier release is well intact.

You’ve heard me compare Casey’s Contraptions and The Incredible Machine a few times in this review, and it’s not because these are the only two games like this ever released. It’s just unfortunate that they were released so close together that you can’t but compare them head to head. I honestly don’t think you can go wrong with either, and the level editor in Casey’s Contraptionsmight have it win the race by a nose,but my personal preference between the two is going to have to side with The Incredible Machine. The pedigree is there, and if you’re as old as me, it’ll poke the nostalgia node in your brain and remind you of playing in younger days.