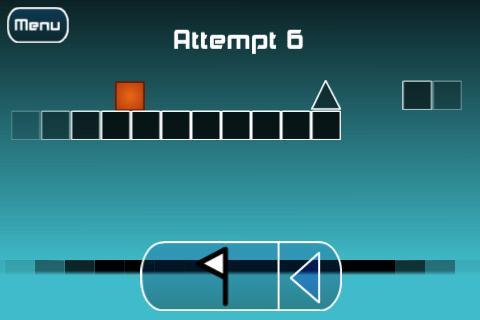 When we reviewed World’s Hardest Game back in March, we were quick to state that the game actually lived up to its title. Now, only a month later, there’s a new game that’s set to give World’s Hardest a run for its money. The Impossible Game is one of the most frustrating, challenging, anger-inducing games on the iPhone – and we loved every minute of it.

The idea behind The Impossible Game is simple. Players control an orange square that is trying to get to the end of a geometric obstacle course in one piece. The only movement the player controls is jumping, which occurs whenever a finger touches the screen. Tapping once results in a single jump for the orange square, and holding your finger down will cause the square to bounce until the finger is lifted.

Since you only control the jump, the square will progress through the level at a steady pace that you have no sway over. You’ll encounter deadly triangle spikes, bold black lines of death, and other squares that need to be jumped on. As soon as you touch any of these you’ll die and lose all progress made, starting right back at the beginning of the game for your next attempt.

For those of us who want to reach the end of the game without putting in the tremendous amount of work involved, the developers have added a nice little touch that will let you create checkpoints for you to return to when you die. These checkpoints are established by placing a ‘practice flag’ at any point in the level you’re currently exploring. If you’re stuck on a specific section of the game, using the practice flag will let you tackle it over and over again without being kicked back to the beginning. It’s definitely a cheat, but it’s one that provides great relief. Once you conquer a certain rough patch you can place more practice flags further down the line until you eventually reach the end. Even with the practice flags though, it should probably be noted that the game remains incredibly hard.

The visual presentation is purposefully simple, making it easy to focus on the task at hand. Music also plays a vital part in the game, as many of the jumps you’ll need to perform happen in time with the beat. It’s a little touch, but having that audio cue can really help you nail jumps that would seem impossible to do otherwise.

The game is supremely challenging – of that there’s no doubt – but if you do manage to complete The Impossible Game there’s little reason to return to it. The game features only one level. Given the challenging nature of the game, the appeal seems to bank on the fact that you’ll never accomplish the Herculean task presented to you. Master it, and this game will likely be forever put back on the shelf. Still – with the endless hours you’ll put in before you reach that point, The Impossible Game will have more than justified its little expense.

After more than 500 attempts this week (the game keeps track) I finally managed to complete The Impossible Game with the use of practice flags. It would no doubt take me another 5000 attempts to master it without. If you don’t mind cursing aloud while you play, The Impossible Game offers up a monumentally fun challenge for any gamer willing to take up the task.