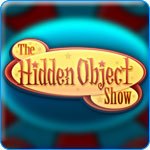 Never in the history of game shows have you had to work so hard to earn that blender or barbecue than in The Hidden Object Show. With 30 hidden object scenes and more than 100 rounds peppered with 10 different random mini-games, reaching the final prize is a test of endurance that is guaranteed – at the very least – to leave you feeling that you’ve gotten your money’s worth.

The premise of The Hidden Object Show is exactly how it sounds: you’re a contestant on a game show where in order to advance you must clear a series of cluttered rooms within the given time limits by finding all of the specific items on your list in each location.

You can use hints to reveal an item’s location if you get stuck, and can collect more hints by clicking on special question-mark icons hidden in the scenes, for a maximum of five. Getting stuck should rarely be a problem since the seek-and-find gameplay isn’t overly difficult, however items do have an occasional tendency of lurking near the edges of the screen where they’re impossible to identify. For example, I had to use a hint to reveal the location of a rabbit that I had been searching high and low for, only to find that it was shoved up into the ceiling with only the bottom part showing – not showing were the tail, ears, or anything else to identify the shape as that of a rabbit.

You’ll earn cash based on how quickly you clear the scene, and every few rounds you’ll also get a prize. These start small (think typical game show staples like kitchen appliances), but turn into bigger ticket items the further along you advance.

There’s ample opportunity to rack up more cash during the frequent bonus rounds that are played between hidden object scenes. You’ll start out by playing two bonus rounds per level, and the number of rounds increases in later levels.

At the beginning of each bonus round you’ll spin a wheel to decide which of the ten mini-games to play, all of which are variations on the basic seek-and-find format. (Three are available right away, and the rest are unlocked.)

Riddles, for example, is a fun scenario where you must search for items based on clues, like "If you want the world in your hand, I’m a good model," meaning a globe. Silhouette (searching for items by their outlined shape) and Find 10 (look for 10 of something in a scene, like dominoes, flowers or vegetables) are two other highlights.

Other mini-games are less well-executed. In Spot the Difference, it was sometimes challenging to identify the differences between two side-by-side images because it was unclear which side of the picture to click on – sometimes the game would accept a click and sometimes not. A ghost cursor on the second image would have helped.

In Picture Pieces, where the scene is divided into a grid and you must find specific squares, sometimes more than one square looks nearly identical because they’re all part of the same off-white wall or similarly uniform background. The same goes for the variation Twisted Pictures.

Because of the sheer volume of bonus rounds to get through, it can get tedious having to watch the wheel spin and slowly come to a stop each and every time. While the element of chance that the wheel adds to the mix is fun, it might have been nice to actually be able to speed up or skip the animation.

On the positive side, the bonus rounds all take place in the same scene as the initial hidden object search, so you get to milk each location for all it’s worth. Also, by spinning the wheel at just the right velocity you can earn Skip Chips. Place these on a mini-game that you don’t like and it will prevent the wheel from landing there on the next spin. And even if you lose a bonus round, you still get to advance.

The game is narrated by a male host who seems to be trying to channel a bit of the smart-aleck vibe of the You Don’t Know Jack trivia games, but his impact is dulled by a limited number of catch-phrases and sound clips repeated ad nauseam. After the sharp writing in Escape the Museum – another Gogii title – The Hidden Object Show’s rather lacklustre script came as a bit of a disappointment.

The game show format and hidden object gameplay work well together, and the fact that a "studio audience" cheers every time you click on a correct item, and groans whenever you click in the wrong place is a particularly nice touch. Many people will appreciate the game’s hefty length (up to 15 hours according to the developer), but with limited variety and a bland host, the game can start to seem like a grind. The Hidden Object Show is a solid seek-and-find game, just one that left us wanting a little more – in spite of its length.